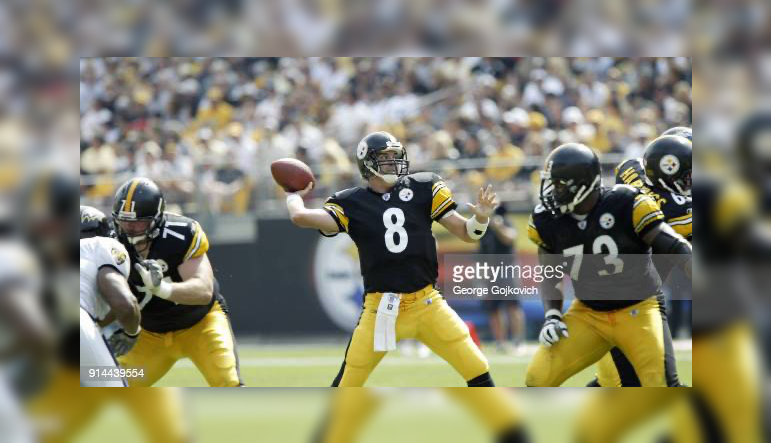 Just under 20 years ago, an exciting Sunday afternoon in the Steel City at Heinz Field between the Pittsburgh Steelers and the Baltimore Ravens to open the 2003 season seemed to be the dawning of a new era for the black and gold, thanks to a journeyman quarterback who seemingly captured the hearts and minds of Yinzers everywhere, not to mention the national media.

That quarterback? None other than Tommy Maddox.

On Sept., 7, 2003, Maddox opened the regular season as the starter for the Steelers under head coach Bill Cowher after becoming quite the story late in the 2002 season, taking over for Kordell Stewart then, piloting the Steelers to a 7-3-1 record as the starting QB in Pittsburgh, eventually taking over the team that offseason for good — at least for the time being.

Named a team captain ahead of the 2003 season, Maddox — a former first-round draft pick by the Denver Broncos in 1992 before bouncing around with the Los Angeles Rams and New York Giants — resurrected his career in the XFL, winning the start-up league’s championship in 2001 with the Los Angeles Xtreme before getting a job with the Steelers.

On that day in Pittsburgh against the rival Ravens, Maddox had a true coming-out party for the black and gold, carving up the vaunted Baltimore defense, giving Steelers fans hope that they’d found their next starting quarterback for the foreseeable future.

That day, Maddox completed 21-of-29 passes for 260 yards and three touchdowns, leading the Steelers to a dominant 34-15 win over the Ravens, picking apart Baltimore’s defense thanks to some stellar play by Plaxico Burress, Hines Ward, and Jay Riemersma.

Opening up the game on a beautiful Sunday afternoon in front of more than 63,000 fans, Maddox was in a groove early.

The veteran gunslinger found Burress for 19 yards on the third play from scrimmage, and later found Riemersma over the middle for nine yards, moving the chains deep into Baltimore territory. Three plays later the Steelers settled for a 29-yard Jeff Reed field goal, taking an early 3-0 lead.

Baltimore, aiming to lean heavily on a defense that was three seasons removed from one of the greatest seasons ever on the defensive side of the football, was breaking in rookie first-round quarterback Kyle Boller against the Steelers, and boy did he have a rough day.

On his first career drive as quarterback of the Ravens, completed just one of four attempts before his fourth throw of the game was picked off by Steelers’ linebacker Kendrell Bell and returned 40 yards to the Ravens’ 28 yard line, giving Maddox and the Steelers great field position early in the game.

Following Bell’s interception, the Steelers went right to work offensively as Maddox found Burress for 16 yards in front of Pro Bowl cornerback Chris McAlister, setting up the Steelers inside the Ravens’ 15 yard line. The drive stalled there though as Maddox was later sacked on third down by first-round draft pick Terrell Suggs, forcing the Steelers to settle for a 31-yard Reed field goal, taking a 6-0 lead.

With the Steelers holding a 6-0 lead, the game turned into a classic Steelers-Ravens matchup as the defenses came through in a big way, forcing the two AFC North rivals to trade punts until late in the first half when the Steelers’ offense found its footing once again, thanks to Maddox’s right arm.

Starting at their own 10 yard line following a punt by Baltimore’s Dave Zastudil, the Steelers called on Maddox late in the second quarter to move them down the field.

Maddox found Hines Ward for seven yards on the first play from scrimmage, and later found Ward for six yards, moving the chains. Maddox then found Antwaan Randle El for 13 yards on a diving catch before then going deep to Burress, who had an impressive start to the 2003 season.

Following a failed Baltimore challenge, the Steelers dialed up the play-action pass for Maddox.

Maddox was in rhythm and exceptionally accurate on the deep ball to Burress, picking up 47 yards in the process while drawing a pass interference penalty that was declined, setting the Steelers up at the Baltimore 8 yard line.

Two plays later, Maddox lofted a perfectly-placed ball to Ward in the back left corner of the end zone for the 4-yard touchdown and a 13-0 lead with three minutes left in the first half.

Coming out of the half with a 13-0 lead and getting an early stop on Boller and the Ravens, Maddox and the Steelers went right back to work offensively. Maddox again hooked up with Burress, this time for 18 yards, and then found Ward for 5 yards.

Running back Amos Zereoue picked up 12 yards on the ground and helped set up a 20-yard strike from Maddox to free agent tight end signee Jay Riemersma over the middle in front of second-year safety Ed Reed, staking the Steelers to a 20-0 lead as Maddox continued to carve up the Ravens’ defense.

With a 20-0 lead in hand, the Steelers started to really get after the Ravens and a young Boller offensively. Two drives later, with no passing game to speak of for the Ravens, the Steelers forced a fumble on an overworked Jamal Lewis that Jason Gildon recovered, setting up the final nail in the coffin from Maddox to Ward.

Twenty-eight yards, wide open in the middle of the Ravens’ defense. What a thing of beauty.

It’s awesome to see that smile and happy-go-lucky attitude from Maddox after each of his touchdowns. He knew he had new life in his NFL career and was truly enjoying the moment on a day in which the city truly embraced him as their quarterback.

Baltimore would later add a pair of touchdowns as Lewis scored from 14 yards out on the ground and Boller found Travis Taylor from 5 yards out, but Zereoue had put the game away for good on an 8-yard draw play up the middle, causing some in-fighting from the Ravens.

On the day, Maddox was one of the best quarterbacks in the NFL, at least from a statline perspective. Burress finished with six catches for 116 yards, and Ward added nine catches for 91 yards and two scores. Defensively, James Farrior led the Steelers with 14 tackles, while Clark Haggans added nine tackles and a sack.

The Steelers were riding high after the beatdown of Baltimore, but Pittsburgh stumbled after that, losing six of their next seven games, eventually finishing the season 6-10, leading to the selection of Ben Roethlisberger at No. 11 overall in the 2004 draft.

For all his magic he displayed in Week 1 of the 2003 season, Maddox couldn’t quite keep it up, throwing for 3,414 yards, 18 touchdowns and 17 interceptions while starting all 16 games that season as the Steelers had the 19th ranked offense that season under offensive coordinator Mike Mularkey, averaging 18.8 points per game.