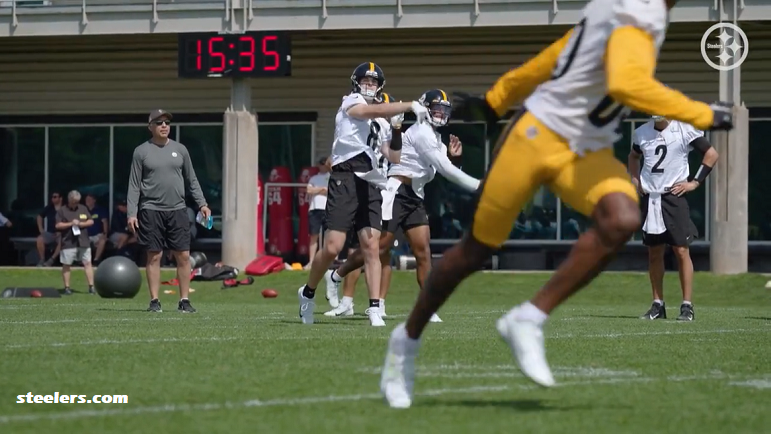 If ESPN’s Brooke Pryor were the one calling shots for the Pittsburgh Steelers in 2022, rookie first-round draft pick Kenny Pickett wouldn’t make his debut until Week 18 against the Cleveland Browns.

That might be shocking to read, considering the investment the Steelers made in Pickett with the 20th overall pick in the 2022 NFL Draft, but for Pryor, that says more about the potential production from veteran free agent signee Mitch Trubisky than it does Pickett’s growth and development as a rookie.

Making predictions regarding Pickett’s percent chance to win the starting job, the percent chance of sitting on the bench all season long and predicting his NFL debut for a piece for ESPN.com Thursday morning, Pryor highlighted the Week 18 matchup against the Browns as Pickett’s likely debut.

Pryor’s prediction comes one day after CBS Sports’ Josh Edwards predicted that Pickett would make his NFL debut in Week 10 against the New Orleans Saints with the Steelers coming out of the bye. Pryor highlighted that game as a potential debut for Pickett as well, but chose the Week 18 matchup as the most likely debut for the rookie quarterback who was a star for the Pitt Panthers, led them to the ACC championship, set school records and was a Heisman Trophy finalist.

“Truthfully, I have two weeks circled as possible 2022 NFL debuts for Pickett. The first is Week 10 vs. the Saints after the bye. If Trubisky isn’t performing, the bye gives the Steelers a natural break to make a starting quarterback change. But if Trubisky is playing well, there’s no point in making a change at that juncture. The second — and more likely — date is Week 18,” Pryor writes regarding her debut prediction for Pickett, according to ESPN.com. “Even in years in which the Steelers weren’t supposed to be part of the playoff conversation, they’ve still had a fighting chance late in the season. This season might not be any different, and as long as Trubisky isn’t losing the team games, it makes sense to stick with him.

“But if Week 18 turns into a formality game with nothing on the line but bragging rights, then the Steelers might give Pickett a taste of an AFC North rivalry game.”

Logically, it makes sense from Pryor, as she is projecting the Steelers to be a winning team that plays well under Trubisky in 2022, forcing Pickett to ride the pine and develop behind the veteran quarterback. If that Week 18 matchup against the Browns were a meaningless game, there’s a great chance Pickett would make his debut in that game, protecting Trubisky from injury while seeing what the first-rounder has in a real NFL game.

That checks out with Pryor’s other predictions, as she cited a 2% chance of Pickett winning the starting job over Trubisky and Mason Rudolph in training camp, and a 40% chance of Pickett riding the bench all season long as a rookie.

“Throughout OTAs and minicamp, Pickett consistently took third-string reps behind Trubisky and Rudolph,” Pryor added. “To supplant Trubisky as the starter by Week 1, Pickett would have to be the second coming of Johnny Unitas as soon as he hits training camp. That’s not happening. And that’s OK — the Steelers don’t need to rush Pickett’s development.”

Though Pickett is relatively old for a rookie at 24 years old, it wouldn’t be the worst thing in the world for the Steelers to bring him along slowly, allowing the offensive line to gel without him on the field while trying to work in new receivers and revive a rushing attack that struggled at times. Like it or not, Trubisky is the sacrificial lamb for the black and gold at the position in Year 2 under offensive coordinator Matt Canada.

Pickett is the intended future, so there is no need to rush him along. When he’s ready, he’s ready. We’ll see if that’s Week 1, Week 10 or Week 18. Regardless, he’ll get a shot eventually. What he does with that chance will matter more than when he made his debut, or what percent chance he has of winning the job in camp or sitting on the bench all season.