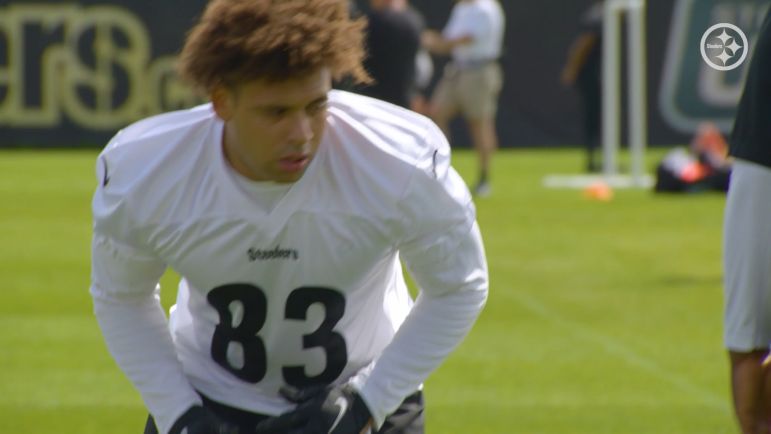 Pryor wrote that “It’s hard to be truly under the radar as Cam Heyward ‘s younger brother, but the rookie Heyward impressed in offseason workouts and showed a chemistry with first-round quarterback Kenny Pickett in a nice snag during a two-minute drill in minicamp.” She also wrote that the younger Heyward has been mostly working with the tight ends and receivers, something that isn’t surprising given that he was expected to play tight end when Pittsburgh drafted him. He also said earlier this month he said he had been exclusively working with the tight ends.

While Heyward might not see immediate action, as he’s currently below both Pat Freiermuth and Zach Gentry on the depth chart, he does present an intriguing option for Pittsburgh. At 6’0″, he’s a little bit undersized for a tight end, but his versatility could help him earn playing time in a potential H-back role. In Matt Canada’s offense, there could be room for both FB Derek Watt and Heyward to contribute in that sort of capacity, although Heyward’s primary focus will be lining up as a tight end.

Heyward and Pickett developing chemistry is a good sign for the two rookies. Even if neither start immediately, they’ll more than likely be on the field together at some point in their careers. While you could argue the chemistry they’re developing is due to the personnel around them, as they worked with the third-stringers in minicamp, it’s still a good sign that the two have found some sort of connection. The tight end can be a major safety blanket for a quarterback, and having a guy you trust at that position is key, as we saw with Ben Roethlisberger and Heath Miller for all those years. It’s good that Pickett and Heyward are seemingly getting a head start on that relationship.

If he continues impressing the way he did in minicamp, Heyward could push Zach Gentry for reps as TE2 and potentially take over that role at some point. After two years of virtually no production, Gentry had his moments last season. He caught 19 balls for 167 yards functioning mostly as the TE3 behind Freiermuth and Eric Ebron, but when Ebron went down with an injury he saw a lot more playing time. Of his 19 catches, 11 of them went for first downs, and he became more of an option toward the end of the season, with 10 of his receptions coming in Weeks 15-18, with another four coming in the playoff loss to the Kansas City Chiefs. If he can build off his performance from the end of the year, Gentry will be tough to beat out for the role.

Let us know in the comments below what you see Heyward bringing to the Steelers in his rookie year.