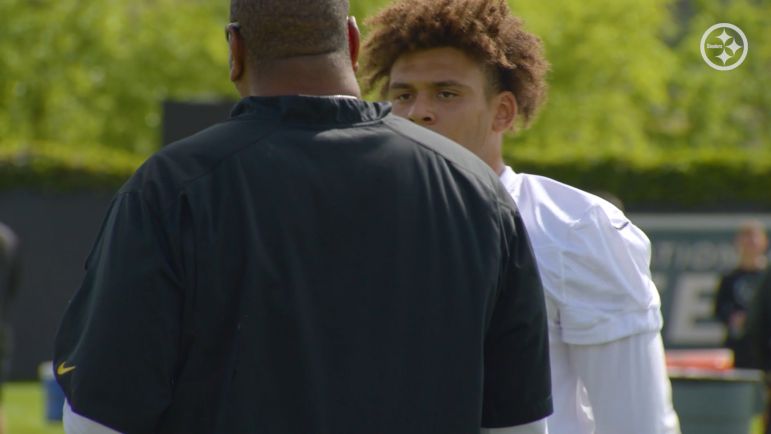 As the NFL’s calendar moves closer and closer to the start of training camp across the country, things are starting to become much more clear for the Pittsburgh Steelers’ plan for rookie sixth-round draft choice Connor Heyward.

Heyward, a running back throughout most of his collegiate career at Michigan State before switching to H-back in 2021, doesn’t have a true position overall in the NFL, at least for the time being. There’s a good chance he’s an H-back with the Steelers moving forward, but for now Heyward is spending a ton of time in the Steelers’ tight ends room under position coach Alfredo Roberts.

Speaking with reporters Wednesday following the Steelers’ latest OTA session at the UPMC Rooney Sports Complex on the South Side, Heyward spoke glowingly of the tight end room overall, featuring the likes of Pat Freiermuth, Zach Gentry, Kevin Rader and Jace Sternberger, stating that he’s appreciative of them taking him in and helping him learn despite not having a true home overall at the moment.

“Right now I’m just strictly with the tight ends,” Heyward said to reporters, according to audio via 93.7 The Fan. “But, you know, I’m enjoying it. At school this past year, I was strictly with the tight ends, so I’m kind of used to it. But, if they have a change of plans going forward, or wanna see me do other things, which I know they want me to do, I’ll be more than happy to do that as well.

“I think all of us get along well, all of us wanna get better and we’re all just happy to be here,” Heyward said added regarding the tight ends room. “I’m appreciative for them taking me in.”

Though the tight end room has taken him in, Heyward still believes he doesn’t have a true set position, and is instead simply focusing on being a football player, which is exactly what he was at Michigan State in his final season, doing whatever was asked of him from the coaching staff for the Spartans.

That’s largely what drew the Steelers’ attention to him in the pre-draft process, especially at the Senior Bowl, where Heyward wore a lot of hats and moved around a bunch, showing off his versatility and willingness to compete rep after rep. That’s what he’s focused on doing in OTAs at the moment, leaning into that “jack of all trades” moniker that’s tied to him for the time being.

Connor Heyward on his 1st 2 weeks of NFL OTAs pic.twitter.com/lrdT9fZELS

“So every level I’ve done that, and hopefully I continue just to be good at a bunch of different things and make the most of my opportunities.”

That’s quite the response from such a young player, but it helps having a media-savvy guy like older brother Cam Heyward right next to him in the locker room. Connor Heyward knows what his path to the 53-man roster is, and so far he’s off to a strong start showing his willingness to do whatever is asked of him.