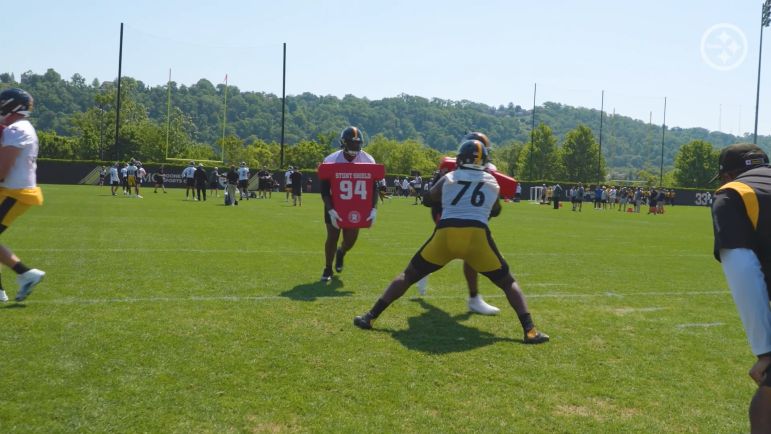 The Pittsburgh Steelers seemingly left many surprised, some even baffled or frustrated, in their decision in March to re-sign fifth-year free agent offensive tackle Chukwuma Okorafor. More specifically, the part that raised eyebrows was the fact that they signed him to a three-year contract worth $29.25 million with a $9.25 million signing bonus and a year-one takeaway of $11 million.

That salary puts him just outside the top five in pay for right tackles, though there is a steep drop from the top five to everybody else. Taylor Moton, right above him, averages $17 million per season, nearly double. He’s much closer to the number 10 right tackle in terms of APY, new Cincinnati Bengal La’el Collins, earning $7 million per season.

Many have questioned the Steelers’ decision, but the organization has never been one to be beholden to public opinions and perceptions. They have the players they believe in, and they tend to stick by them when it works within their budget. It works, at least, for the players.

“I really don’t care what guys on Twitter have to say”, Okorafor told reporters yesterday, via audio from 93.7 The Fan. “If Mike [Tomlin] and everyone upstairs thinks I was worth that much, that’s really what matters. I could care less what anyone on Twitter or Instagram or anyone says about me, truly”.

A third-round pick out of Western Michigan in 2018, Okorafor entered his first three seasons as a backup, losing out on training camp competition for the starting right tackle job in 2019 (Matt Feiler and Zach Banner) and 2020 (just Banner). Banner, of course, suffered a torn ACL in his first start in 2020, resulting in Okorafor playing the rest of the way.

Last season, Okorafor was slated to move to left tackle until just a week or two before the start of the regular season, having worked on the left side throughout the offseason and requiring that late adjustment. Banner was supposed to start at right tackle, but his knee never fully recovered from the prior year.

While Okorafor did well in not allowing sacks last season, he was highly penalized, particularly before the snap, which is unusual for such an experienced player (and which wasn’t nearly an issue earlier in his career, suggesting an aberration rather than a pattern).

One can also attribute some of his pass-blocking success to the Steelers’ very rapid time-to-throw, as his actual win rate—whether or not an offensive lineman ‘wins’ a rep, rather than whether or not he allows a pressure—was no more than average at best. As was his run-blocking performance.

Still, he is an ascending veteran, only just about to turn 25 years old. He began playing football in high school, and declared for the draft as an underclassman. This is only about his 11th season that he is going into as a football player, beyond working as a kicker. How much upside is there remaining? The Steelers ponied up a bit this offseason to find out.