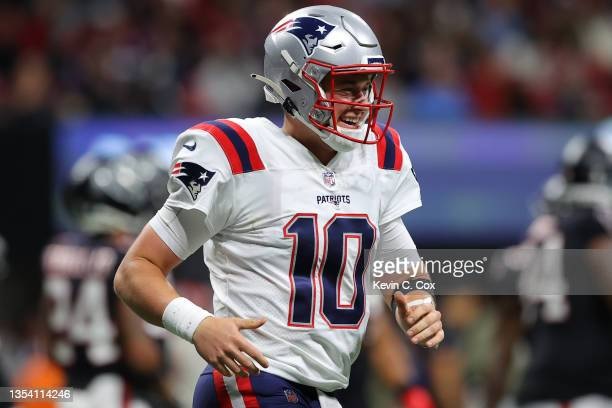 As we witnessed last season, there were several quarterback talents selected in the first round of the 2021 draft, but only one made the playoffs and that was obviously Mac Jones of the New England Patriots, who also made the Pro Bowl. Behind a strong running game, led by Damien Harris and rookie Rhamondre Stevenson and a solid defense, Jones led the Patriots to the postseason, where they ultimately fell to their division-rival Buffalo Bills. However, did their success story with a rookie QB lay down a blueprint for the Steelers to follow, if rookie Kenny Pickett does indeed take the starting gig?

First things first, the skill set talent, particularly at wide receiver, that’ll be surrounding whoever starts at QB is superior to that of the unit that the Patriots fielded last year. True, they featured a two-headed monster ground attack while Pro Bowler Najee Harris only logged the most touches in the league. However, comparing the likes of Kendrick Bourne and Jakobi Meyers to Pro Bowler Diontae Johnson, Chase Claypool, and incoming rookies George Pickens and Calvin Austin III is like night and day. Their running game was extremely successful last season, and that was put on display perfectly in a windy Monday night game versus the Bills in early December. Harris ran for 111, Stevenson ran for another 78 and Jones attempted ONLY three passes. True, the weather did play a factor but this is another reminder what a lethal ground game can do to supplement a young signal caller.

Now we look at the respective offensive lines. Although the unit didn’t boast any Pro Bowlers last year, the Patriots’ line is the model of consistency in the NFL, and is led by arguably the best offensive line coach in the league in Dante Scarnecchia. The Steelers, on the other hand, fielded a pretty bad line last year, with Harris more often than not being forced to create yards on his own, as he was frequently met at or behind the line of scrimmage by multiple defenders. The team made upgrading the unit a priority this offseason, as they signed arguably the top guard available in James Daniels, as well as center Mason Cole. The center spot is often viewed as the sore spot last year, with rookie Kendrick Green struggling to make the transition from college guard to big-league pivot man. In OTA’s he’s been seen taking reps at guard, his more natural position. Left tackle Dan Moore Jr. looks to make some improvements in year two as well, as his rookie season started a bit rocky but then showed some glimpses of nice potential. Overall, the unit should be an improvement over what was fielded last year.

Then we come to the defense. With a 32nd-ranked run defense last year, the only way to go is up, and a lot of that can be attributed to injuries by Stephon Tuitt and Tyson Alualu. However, they feature All-Pro’s at every level of the defense including Cameron Heyward, the reigning DPOY in T.J. Watt and free safety Minkah Fitzpatrick, who hopefully will soon get his deserving extension.

While both QB’s share some similarities, they do offer differing skill sets. Both Jones and Pickett were Heisman finalists, both coming up short. Both display nice pocket awareness and the ability to make all the throws, but Pickett has him beat in the mobility department. It’ll be interesting to see a QB with some mobility finally unlock Offensive Coordinator Matt Canada’s offense, as both he and Mitch Trubisky can move with their legs. This adds an important element to the ground game because when the chains move, the clock moves and that gives a team that’ll be reliant on grinding out the clock an extra chance to give their defense some rest. After all, this team in the upcoming season will more than likely be finding success playing ball control and winning with defense as opposed to asking a green signal caller throw it 50 times. Even if Pickett doesn’t start the year, the same winning recipe should hold true with Trubisky, as he and Pickett possess very similar skillsets. The road map has been laid out by the Patriots last year. It’ll be interesting to see if the Steelers look to follow a similar game plan.