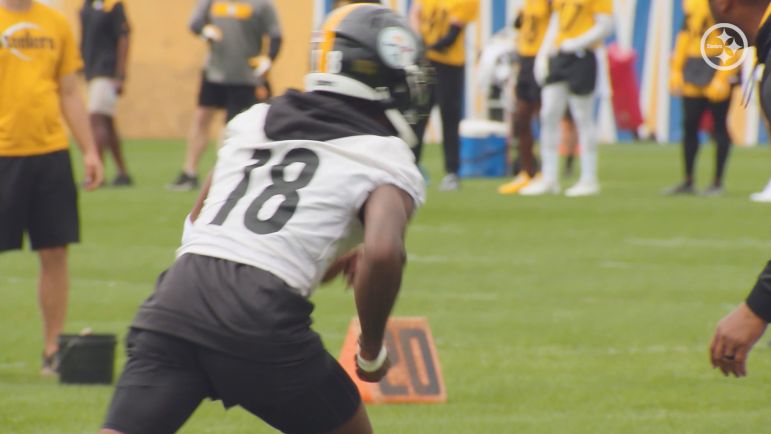 Topic Statement: The Steelers will not extend Diontae Johnson, but give him the franchise tag or transition tag next year.

Explanation: Similar to Bud Dupree, Diontae Johnson is looking like a player who is pricing himself out of the Steelers’ projected price bracket for his services, but that doesn’t mean they can’t hold on to him for one more season by using a more affordable franchise tag or transition tag.

It’s a foregone conclusion that the Steelers are not going to work out a long-term extension with Diontae Johnson at this point this offseason. With the prices of wide receivers skyrocketing and Terry McLaurin’s deal the latest proof of that—and the most correlative to what Johnson might be expecting—there’s just no way such a deal is coming from the Steelers in July and August.

But the Steelers aren’t just going to let Johnson slip away. Just like they played out Le’Veon Bell and Bud Dupree for an extra year (Bell for two years, or so was their intention), they’re likely to tag him rather than let him immediately sign elsewhere in free agency, even knowing that the prospects of a long-term extension are slim. This wide receiver group won’t be solidified enough where they will be eager to move on from him by March.

The ballooning of wide receiver contracts also means the ballooning of the tag values. With so many wide receivers now eclipsing $20 million per year, that’s the direction the value of the franchise tag is heading, and the transition tag will only be a few million behind.

Would the Steelers really tie up that money for one year of Johnson when they’re not in a tight theoretical championship window? While, yes, they in principle are trying to win the Super Bowl every year, even Kevin Colbert has acknowledged the necessity of the long-term view.

Pittsburgh can spend that money next year either on other positions or on a cheaper veteran who can work with Chase Claypool and George Pickens and Calvin Austin III. And they’ll be drafting another wide receiver next year, as well. Offensive tackle sounds like a much more tempting target with that coin.