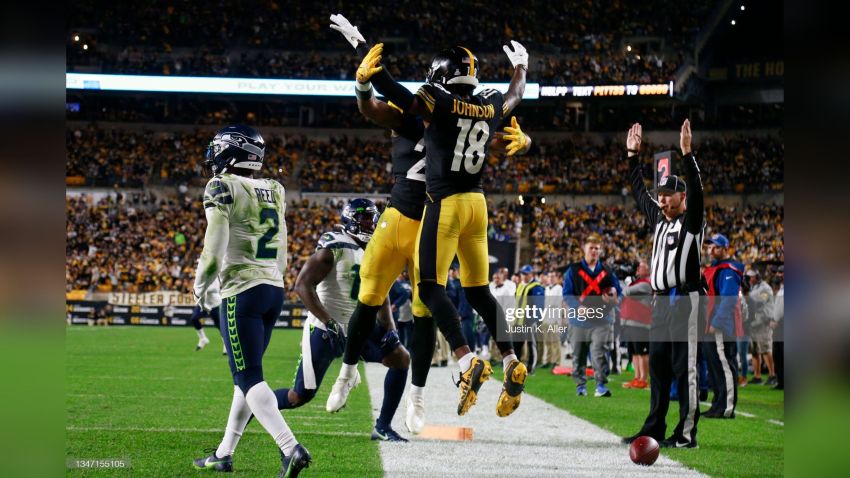 Ian Hartitz of Pro Football Focus has been conducting his annual offseason team preview series of every squad in the league, highlighting the outcomes of last season and the changes to each roster via the draft and free agency to predict the outcomes for the notable skill position players from a fantasy football standpoint. Hartitz and his co-host, Dwain McFarland of the PFF Fantasy Football Podcast have been extremely helpful to me personally, answering numerous questions I pose to them about start/sit advice as well as potential trade targets during the season. Therefore, I have come to respect both greatly in the industry and wanted to dive into Hartitz’s thoughts on our Pittsburgh Steelers in 2022.

At the QB position, Hartitz is hedging that both Mitch Trubisky and Kenny Pickett will see time as the starter this season, ranking Pickett as the QB30 and Trubisky as the QB34. Thinking it will be a game of “musical chairs” during the season to see who best executes under center for Pittsburgh, Hartitz does believe that Trubisky will be the opening starter and might not be getting the credit he rightfully deserves during his time in Chicago.

“Here’s a little secret: Trubisky was actually a pretty solid fantasy quarterback during a large chunk of 2018,” said Hartitz “Overall, he ripped off fantasy QB1 (x2), QB2, QB5, and QB9 finishes between Weeks 1-11 before suffering a shoulder bruise. The overall QB7 during this stretch, Trubisky averaged a robust 36.3 rushing yards per game and racked up three performances with over 300 passing yards and three scores.”

Should Trubisky perform to those levels like he did in 2018, Steelers fans would likely be ecstatic even though it would be hard to justify getting rookie first round QB Kenny Pickett on the field then. Still, Trubisky isn’t without his warts as a passer, needing the process faster in the pocket and have more consistent accuracy down the field. Along with the question of if the offensive line can hold up better in 2022 compared to last season, it’s understandable why Trubisky isn’t on the fantasy radar at this point compared to other QBs in more stable roles. However, Hartitz again argues that Trubisky’s regression after his 2018 season can’t be put entirely on his shoulders.

“The 2017 NFL Draft’s No. 2 overall pick clearly regressed in 2019 and 2020, but there’s a case to be made that he managed to make the most out of a fairly awful situation. Trubisky’s first season was largely lost with the John Fox-led Chicago Bears in a similar manner as Jared Goff and Trevor Lawrence,” Hartitz continued. “Trubisky certainly deserves plenty of blame for 2019’s drop off in performance with his receivers repeating their top-12 open-route rank, but 2020 (24th) and 2021 (32nd) revealed that head coach Matt Nagy, as well as the surrounding talent available, might have been the larger problem.”

There is no denying the fact that RB Najee Harris is Pittsburgh’s most attractive fantasy asset heading into 2022. He finished as a top five back in fantasy last season, and Hartitz doesn’t see that changing anytime soon, ranking him as his RB4. While Harris may have and a top five finish in 2021, it didn’t come on the back of high efficiency, breakaway runs, or a high touchdown rate. Rather, it came on the back of the #1 thing fantasy football players look for at the running back position: volume.

“Harris managed to put up such big counting numbers thanks almost entirely to his corresponding volume. Only Derrick Henry averaged more expected PPR points per game in 2021, as Harris was regularly afforded 20-plus combined carries and targets, “said Hartitz regarding Harris. “Ultimately, volume is king in fantasy football, and Harris projects to have more of it than just about anyone else. The Steelers have historically leaned heavily on a single running back, Le’Veon Bell (25.6 touches per start), DeAngelo Williams (22.8), James Conner (20.8), Jaylen Samuels (18), and even Steven Ridley (17).”

Hartitz notes that while Pittsburgh has expressed interest in taking Harris off the field more to save his body from unnecessary beating and that his targets in the passing game could dip from having Ben Roethlisberger pepper him in the short and intermediate portions of the field last season, Harris still should shoulder one of the greatest workloads in the NFL. Having only Benny Snell and Anthony McFarland behind him now, Pittsburgh’s offensive efficiency would drop drastically without Harris out there for any period, meaning that he should expect to be a workhorse again in 2022. He may not have overall RB1 upside, but with an improved IOL, Harris’s efficiency and explosive run rate should see an improvement from last season.

“Harris comes in as my RB4, behind only Taylor, McCaffrey and Henry. I would take Harris ahead of aging veterans Ekeler, Cook, and Barkley thanks to his superior chances of receiving a touch count closer to 400,” said Hartitz.

The most notable name in the WR room for Pittsburgh is none other than Diontae Johnson. Hartitz and McFarland recently got into a heated debate when discussing the Arizona Cardinals in a team preview when the conversation turned to focus on Johnson. McFarland sees Johnson as a top ten, if not top five receiving talent in the league that would be unlocked if he were in a more prolific offense. Hartitz disagrees, seeing Johnson as a solid receiver, but has him come in at WR19 in his pre-season rankings.

“Johnson’s ability to demand more targets than just about anybody allowed him to get by just fine with subpar per-route efficiency numbers,” said Hartitz. “However, there has to at least be some uncertainty about Johnson demanding that same sort of gaudy target share inside of this new-look Steelers offense. Claypool didn’t score 13 touchdowns in 17 games as a rookie by accident, and Pickens wasn’t selected on Day 2 in order to sit on the bench. Obviously, Harris and TE Pat Freiermuth will be involved as well.”

Hartitz not only notes that the efficiency stats of Johnson with Ben Roethlisberger last season muddy the water in terms of how good of a receiver Johnson is, but also that utter volume has been the driving force for much of his production the last two seasons, seeing 313 targets in the last 31 games. While Johnson is a skilled technician as a route runner to warrant those targets in the passing game from Roethlisberger, the Steelers offense has also benefited from overall high volume, ranking fourth in pass attempts in 2021 and first in the league in pass attempts in 2020.

Should those pass attempts drop in 2022 and Pittsburgh become more balanced on offense, Johnson’s overall target share could drop along with the uncertainty of if Trubisky or Pickett will lock onto Johnson as much as Ben did. Johnson could easily see an uptick in efficiency and usage down the field, but that improved efficiency as a pass catcher is more of an unknown variable heading into next season than the likely drop in overall pass attempts and target volume Johnson saw in the last two seasons with Ben at the helm.

“Johnson finds himself in the WR2 jumble, where seemingly everybody has at least one red flag,” Hartitz continued regarding Johnson. “I’ll take Johnson ahead of more likely No. 2 pass-game options such as Jaylen Waddle, Gabriel Davis, and Rashod Bateman, but I’d take D.J. Moore, D.K. Metcalf, and Terry McLaurin ahead of Johnson under the belief that they hold similar target projections and are superior overall players.”

In regards to the other notable fantasy receivers on the roster, Hartitz has Chase Claypool as his WR47 and George Pickens as his WR69, stating that both have upside to finish far higher than their current rankings suggest, but that it comes down to if Pittsburgh and be above a bottom-ten scoring offense this season.

The only TE of note on Pittsburgh’s roster from a fantasy football perspective is Pat Freiermuth. The second-round rookie out of Penn State came on strong in his first season as a pro, posting 60 receptions for 497 yards and seven TDs. Given the fact that he only tarted nine games as a rookie and was eased into the offense early in the season, suggesting that there may be more meat on the bone in terms of production as he heads into year two.

“Freiermuth impressed with his opportunities in 2021,” said Hartitz “Typically rookie tight ends produce next to nothing during their debut season, so it was pleasantly surprising to see the Steelers’ 2021 second-round pick look more than capable as a receiver.”

Still, while Freiermuth should be more of a focal point of the passing game heading into 2022, the same concerns with Najee Harris and Diontae Johnson linger with Freiermuth as well concerning overall volume in the passing game. There is only one ball to go around in Pittsburgh, and if the pass attempts drop by 5-7 a game from last season to run the ball more and chew up clock, Freiermuth’s efficiency in the passing game may have a tough time improving, especially if he is still relegated to a short-area target.

“It might be tough for Freiermuth to make too much happen with that sort of role considering he was targeted on a pass that traveled at least 20 yards in the air just once all season,” Hartitz continued “His sub-six-yard average target depth could certainly increase with a new quarterback under center, but if not, he’ll need to live on touchdowns in an offense that isn’t exactly expected to live in the red zone.”

Hartitz put Freiermuth as his TE12, ranking him as the last TE1 in a standard size 12-man league format in fantasy football. Unless the pass attempts stay high this season like they have the last couple of years with a new QB under center, it may be difficult for the passing game options in Pittsburgh to thrive unless the offense truly opens in the second year of OC Matt Canada’s offense. Hopefully with a more mobile passer at QB with a more youthful arm, we will see the likes of Johnson, Claypool, Pickens, Freiermuth, and even Harris used more in the intermediate and deep portions of the field for splash plays, something Pittsburgh’s passing game has sorely been lacking in recent years.

What are your thoughts on PFF’s fantasy football team review of the Pittsburgh Steelers? Do you think that Hartitz’s rankings are warranted? What points do you agree with in this analysis, and what points would you argue against? Will you be targeting any Steelers for your fantasy football teams this season? Please leave your thoughts in the comments section below and thanks again for reading!