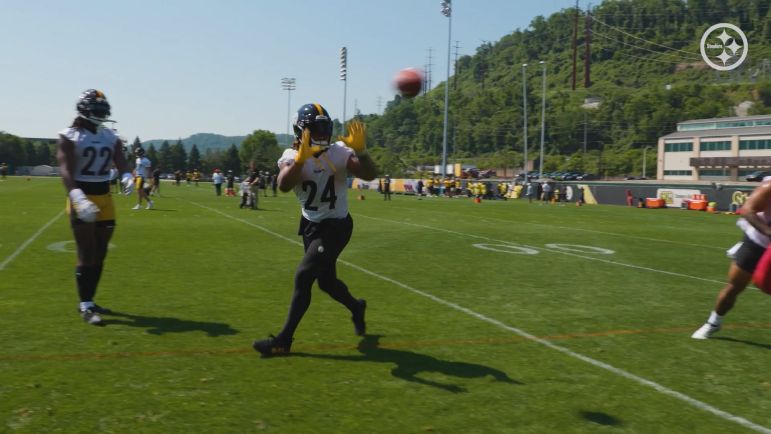 Reasoning: The fourth-year running back remains second on the depth chart behind Najee Harris, with the team having failed to significantly address the position this offseason, and coaches have voiced their support for his brand of football.

Since you all so enjoyed the advance-by-default nature of yesterday’s volume on tackle Joe Haeg, whose position the Steelers have failed to upgrade this offseason, I figured we would give it another crack. Another ‘winner’ of the offseason on the Steelers’ roster, in terms of their own personal benefit, is veteran running back Benny Snell, who has been presented with minimal competition for his job thus far.

Pittsburgh carried four running backs last year, but did not retain Kalen Ballage, while Anthony McFarland has yet to show anything that would present him as a threat to even Snell. They did add Mataeo Durant and Jaylen Warren as college free-agent rookies, but both would probably have to make the roster to knock Snell off.

Still, it’s not all so passive. While he remains in good position to retain his role as the primary backup to Najee Harris, Snell has also been spoken of highly by his position coach, Eddie Faulkner, earlier this offseason during OTAs.

“I feel like he’s more explosive”, he said about a month back. “I feel like he’s always been this way, but he’s more open to coaching and detailing his work and those things. And so I’m excited about some of the advances that he’s made and the maturity and character he’s bringing to the room and what not, and that’s exciting”.

Most fans haven’t found Benny Snell Football™ to be all too exciting thus far through his first three seasons, outside of a shining moment or two, but unless or until Pittsburgh goes out and acquires some serious competition, he is another reserve, like Haeg and others, whose job security rests largely upon being unchallenged in a meaningful way.