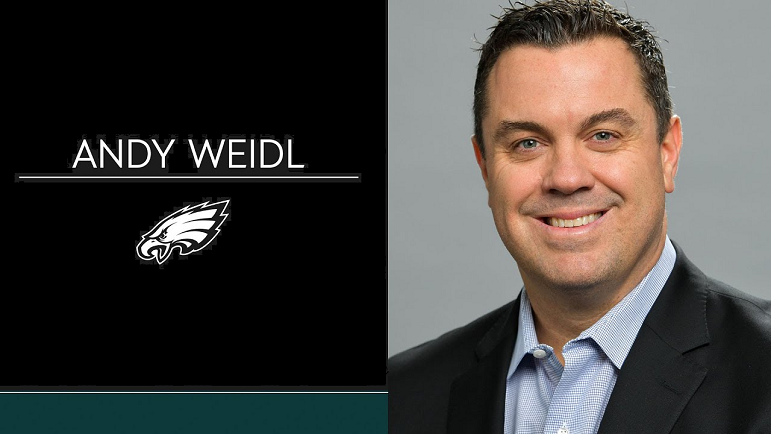 News broke late last night that Pittsburgh Steelers are expected to hire the Philadelphia Eagles’ Andy Weidl as an assistant GM, according to Aditi Kinkhabwala. Weidl comes to the Steelers with 24 years of scouting experience under his belt, and when you look back at the history of the teams he has worked with and the draft classes they brought in, you find a profound emphasis on both the offensive and defensive lines. Weidl naturally has a good feel for trench play as he played along the offensive line in college at Villanova and earned the Thomas J. Burke Award for his “consistent performance and dedication” during his time with the Wildcats.

Pittsburgh native and #Eagles VP of Player Personnel Andy Wiedl is slated to be named #Steelers’ new assistant GM, multiple sources around the league tell me. That means signs point to longtime Steelers exec Omar Khan emerging as winner of the search to replace Kevin Colbert.

While working as a scouting assistant with Pittsburgh back in 1998-99, Weidl assisted the likes of HOF scout Bill Nun and director of football operations Tom Donahoe that spent their first three selections on the offensive and defensive lines, selecting HOF OG Alan Faneca in the first round and followed that up with selections of DE Jeremy Staat and OT Chris Conrad in the following rounds. Weidl was also a part of the staff that selected DE Aaron Smith the following year in 1999 in the fourth round.

Weidl was a part of a New Orleans Saints staff that spent early draft capital on the likes of DE Charles Grant (1st), OT John Stinchcomb (2nd) and DE Will Smith (1st) between 2000-2004. Weidl then transitioned to Baltimore to work on the Ravens scouting staff, holding various positions for the next decade. During his tenure in Baltimore, Weidl saw himself a part of a staff that again put a heavy emphasis on the trenches, drafting the likes of Haloti Ngata (1st), Chris Chester (2nd), Ben Grubbs (1st), Marshal Yanda (3rd), Michael Oher (1st), Paul Kruger (2nd), Kelechi Osemele (2nd), Brandon Williams (3rd), Timmy Jernigan (2nd), and Ronnie Stanley (1st).

Weidl then transitioned to the Philadelphia Eagles front office that has been notorious for putting heavy emphasis on beefing up the trenches through the draft. GM Howie Roseman has said time-and-again that trench play is a major focus of their team and former Eagles VP of Player Personnel and current New York Jets GM Joe Douglas has taken the same approach in his rebuild of the Jets roster, putting heavy investments both through the draft and free agency on beefing up the offensive and defensive lines.

Did we know what Howie Roseman was going to do last night? No. But we had kind of an idea. The #eagles always build within the trenches and a priority this offseason was adding talent around Jalen Hurts. Now what do they do on day 2? My report on @nflnetwork pic.twitter.com/dylAWwspzg

While the Pittsburgh Steelers haven’t been completely against investing premium draft capital into the trenches during Colbert’s tenure as GM, there has been a lack of high draft pick selections along both the offensive and defensive lines in recent seasons. The selection of DE DeMarvin Leal this year out of Texas A&M is the highest investment on a defensive lineman the team has made since Javon Hargrave in 2016 who coincidentally signed with the Philadelphia Eagles while Weidl was on staff there. Before that one must go back to 2014 and the selection of DE Stephon Tuitt for a top two-round selection for Pittsburgh and all the way back to 2011 when Pittsburgh selected DE Cam Heyward for their last first round selection at DL.

When it comes to the OL, it tends to be a similar story. Sure, Pittsburgh went heavy in the trenches in the early 2010s when Pittsburgh selected C Maurkice Pouncey (1st), OT Marcus Gilbert (2nd), OG David DeCastro (1st), and OT Mike Adams (2nd) in the span of three years, but since then, the focus on fortifying the OL has notably fallen off. After 2012, Pittsburgh went without selecting an OL in the top three rounds until 2018 when they picked OT Chukwuma Okorafor in the 3rd round. The only other notable additions Pittsburgh has made since then are the selections of OG Kevin Dotson (4th) in 2020 and C/OG Kendrick Green (3rd) in 2021.

Along with the lack of investing heavy draft capital in the OL in recent seasons, Pittsburgh also has notably not selected an OT in the first round throughout Colbert’s tenure. Colbert acknowledged just as much during his press conference at the 2022 NFL Combine I was in-attendance for and was made aware of it again during a one-on-one interview segment on Steelers.com with reporter Missi Matthews.

Colbert acknowledged the fact that they haven't draft an offensive tackle in the first round in his tenure as GM, but said "Just because we haven't done it in the past doesn't mean we won't take that option off the board this year." #Steelers

It could be a team building philosophy thing for Colbert to look to address the OL, specifically OT with later selections in the draft, or simple chance that he never drafted an OT in the first round in his 22 years as GM of the Pittsburgh Steelers in the NFL Draft according to video via the Steelers’ official YouTube page.

Still, the focus on retooling and fortifying the trenches hasn’t been there for Pittsburgh for much of the past decade, and it shows given the inability to effectively replace grizzled veterans like Pouncey and DeCastro, leading to woes along the OL the last two seasons. The same can be said for the DL as Pittsburgh had virtually no quality depth behind Tuitt and Alualu when they went down to injury, resulting in a historically bad run defense in 2021.

Based on Weidl’s background and experience with his previous stops, I would expect a new-found emphasis to be put on building up both the offensive and defensive lines in Pittsburgh in the coming seasons to return this team to dominant trench play they are used to having when making deep postseason playoff runs. Given that new GM Omar Khan has been on-hand to experience the rapid turnover in the trenches over the last couple of seasons, I personally would expect both he and Weidl to be in lockstep to build this thing from the front line back to both properly protect new first round QB Kenny Pickett for years to come and return the defense to its prior glory as a stout run stopping unit.

What are your thoughts on the addition of Andy Weidl to the Steelers front office as assistant GM? Do you think that there will be an added emphasis on building up the offensive and defensive lines through the draft than in years past? Does Weidl’s experience and background give you faith in his ability to aid Omar Khan and the front office in evaluating and adding talent on other sides of the line of scrimmage? Please leave your thoughts in the comments section below and thanks again for reading!