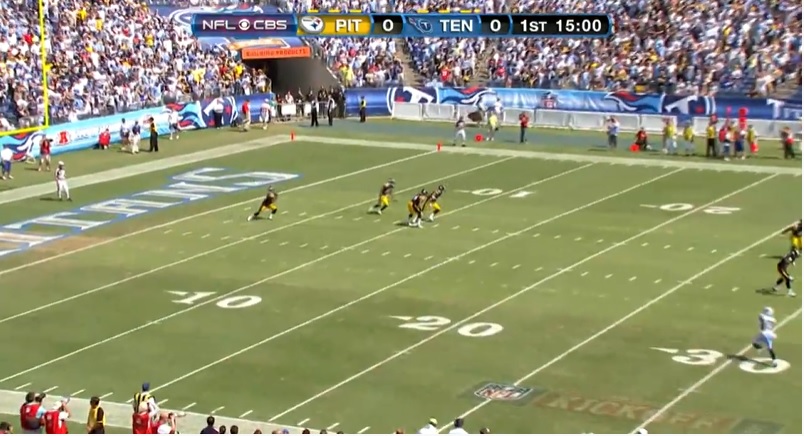 I’m writing this article in honor of the Pittsburgh Pirates improbable win Sunday afternoon over the Cincinnati Reds, a game in which they registered zero hits and still – somehow – won. They did so by walking their way to a bases loaded situation in the bottom of the eighth with KeBryan Hayes providing the winning and lone run of the day, grounding into a fielders choice. David Bednar closed out the 9th and Pittsburgh won, 1-0, despite being blanked in the hit column.

What are the Pittsburgh Steelers’ closest equivalents? Games they won where you step back and go…how? Throughout their history, there’s a long list of them. But here’s the three most notable where the Steelers seemingly lost but still won.

In the grand scheme of things, a relatively recent game, Pittsburgh beat Tennessee 19-11 despite one of their ugliest offensive outputs. The Steelers were without Ben Roethlisberger, serving the second game of his four-game suspension.

Dennis Dixon, remember him?, got the start but quickly gave way to Charlie Batch after suffering a knee injury. Batch didn’t fare much better and the two quarterbacks combined to complete just nine passes for 43 (!!!) yards and four sacks.

The longest play of the Steelers’ offense the entire game was a 21-yard rush by Dixon while RB Rashard Mendenhall didn’t any better, averaging a paltry 3.0 yards per carry.

Pittsburgh got their points two ways. Antonio Brown’s first career touch was the stuff of legends, taking a Mewlede Moore reverse on the opening kickoff for an 89-yard touchdown. Jeff Reed provided the rest, going a perfect 4/4 on field goals.

Like the Pirates yesterday, the Steelers played good defense. Tennessee’s offense still ran circles around the Steelers but Pittsburgh’s defense forced seven turnovers, getting Vince Young benched (and crunched) for Kerry Collins. Young and Collins were responsible for six of those turnovers while RB Chris Johnson fumbled away the other.

Despite an offense that routinely went nowhere, Pittsburgh easily controlled the time of possession battle and hung on to win. The eight-point victory is even deceptive. Tennessee closed the gap with under a minute left.

Since 2010, teams are 5-30 when registering just seven first downs as the Steelers did that day. And Pittsburgh is only one of two teams over that span to win by 8+ points, joining the 2017 Chicago Bears after beating the Carolina Panthers. An ugly win that night for Pittsburgh but without their QB, walking away with wins was really all that mattered.

As is often the case in these unlikely-looking wins, turnovers made the difference. The TO differential was closer here than the other two games on this list, 3-1, but the Steelers still capitalized on their chances with a Rod Woodson pick-six, jumping a sideline throw.

Woodson was the star of the day, blitzing off the edge to strip-sack Kelly in his end zone with DT Gerald Williams diving on the ball for the other Steelers’ score.

Pittsburgh’s defense finished the day with seven sacks and dominating the day. The Steelers won by two-possessions, 23-10.

Something about Week 2 leads to some quirky results, apparently. Warren Moon threw for nearly 300 yards against the Steelers while Bubby Brister couldn’t even crack triple-digits. Yet Pittsburgh won relatively comfortably, 20-9.

Pittsburgh got on the board first thanks to a D.J. Johnson pick-six of Moon in the first quarter. In fact, the Steelers’ defense was responsible for both of the team’s touchdowns. Rod Woodson provided the dagger with a pretty 52-yard punt return TD in the fourth quarter.

To win ugly, all you apparently need is Rod Woodson.