The Pittsburgh Steelers signed yet another one of their seven 2022 draft picks on Friday in defensive end DeMarvin Leal. With Leal now signed sealed and delivered, the team only has two more draft picks to sign in quarterback Kenny Pickett and wide receiver Calvin Austin III. The team also has made a flurry of moves since their rookie minicamp got underway last week and those transactions included four more undrafted players being signed and one veteran player being added in offensive lineman Trent Scott. The team has also since waived two other players as injured. With so much activity taking place recently, it’s probably time to offer up another salary cap update on the team and especially with so much misinformation being posted by other Steelers blogs these last few days.

For starters, let the record show that the NFLPA website currently has the Steelers at $12,787,753 under the cap as of Saturday morning. The NFLPA website, however, is way behind on the Steelers flurry of moves that have taken place since last week. In fact, the NFLPA still does not have all the original 10 undrafted free agents that the Steelers signed accounted for. All moves since then have also yet to be accounted for and that is not surprising for this part of the offseason.

With the NFLPA being way behind right now in their updates, I must announce that this Saturday update of mine can’t be considered official. It should, however, be very close to being right, if not 100 percent correct. For example, I still do not know for sure if the one-year contract that the aforementioned Scott signed included a signing bonus as part of a veteran benefit deal. Additionally, I still do not know for sure if any of the four new rookie undrafted free agents that were signed received piddling signing bonuses of around $1,000 each.

For now, I am rolling with the assumption that Scott did not receive a signing bonus and that the four new rookie undrafted free agents also did not receive bonusses as well. As for the five draft picks that the Steelers have signed to date, wide receiver George Pickens, Leal, fullback/tight end Connor Heyward, inside linebacker Mark Robinson, and quarterback Chris Oladokun, I’m pretty sure the contract numbers I have for them are all correct, even though none of them have hit the NFLPA yet.

As you can see in the table of salary cap data below, I have the Steelers currently estimated at being $12,305,435 under the cap. That number isn’t going to be too far off from being correct, if it is not 100 percent correct.

The Steelers obviously still have several forthcoming costs coming and that’s why they are projected to be $3,882,250 over the cap right now when looking ahead to Week 1 of the regular season. That said, that overage is not glaring at all and especially with future cuts and an extension or two on the way. The team is in great shape from a salary cap standpoint right now. Depending on how things play out with defensive end Stephon Tuitt in the coming weeks, the Steelers might not need to restructure the contract of outside linebacker T.J. Watt later in the summer.

When the NFLPA updates and/or the remaining draft picks sign their rookie deals, I will provide another full salary cap update on the team. 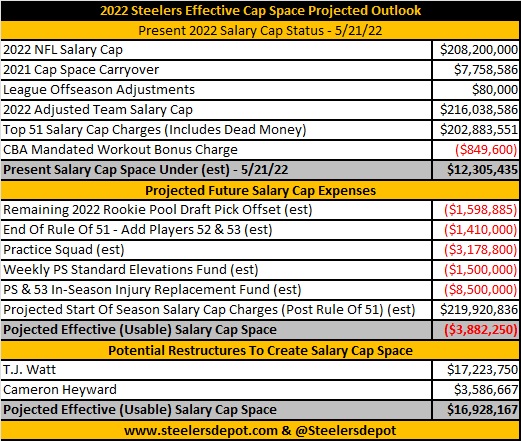