51 players are attending Pittsburgh Steelers’ rookie minicamp this weekend, which runs today through Sunday. It’s made up of first-year players, rookies (drafted and undrafted) and a long list of tryout players. Courtesy of the Steelers, here’s the list of who is participating this weekend.

First, a list of the first-year players and drafted/signed rookie class. 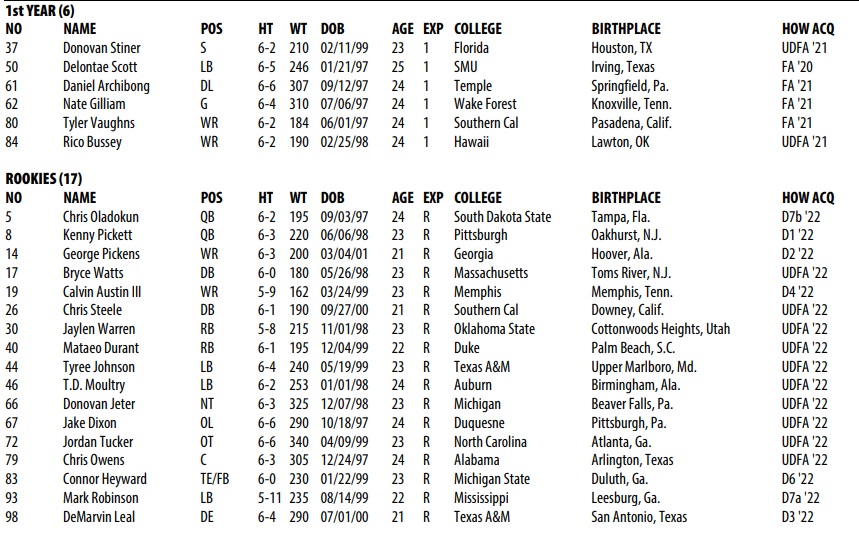 The six first-year players already on the Steelers roster prior to the draft are: S Donovan Stiner, EDGE Delontae Scott, DE Daniel Archibong, OG Nate Gilliam, and WRs Tyler Vaughns and Rico Bussey. All six signed Reserve/Future contracts with the team last offseason. Scott and Archibong briefly appeared in games for the team last year but still retained rookie minicamp eligibility. Stiner was one of the more notable UDFAs signed by the team following the 2021 NFL Draft.

Of course, the seven Steelers’ draft picks and ten UDFAs are also in attendance. It’s the first look at QB Kenny Pickett in a Pittsburgh Steelers’ uniform. Ditto with WRs George Pickens and Calvin Austin III, a pair of players who could impact the offense in Year #1. We also have jersey numbers for the UDFA class, though those are very much subject to change. There’s no guarantee all ten UDFAs make it through the weekend. It’s fairly common for one or two of those guys to be released and replaced by a tryout player.

Speaking of which, a whopping 28 tryout players are in Pittsburgh this weekend hoping to catch a contract. They are: 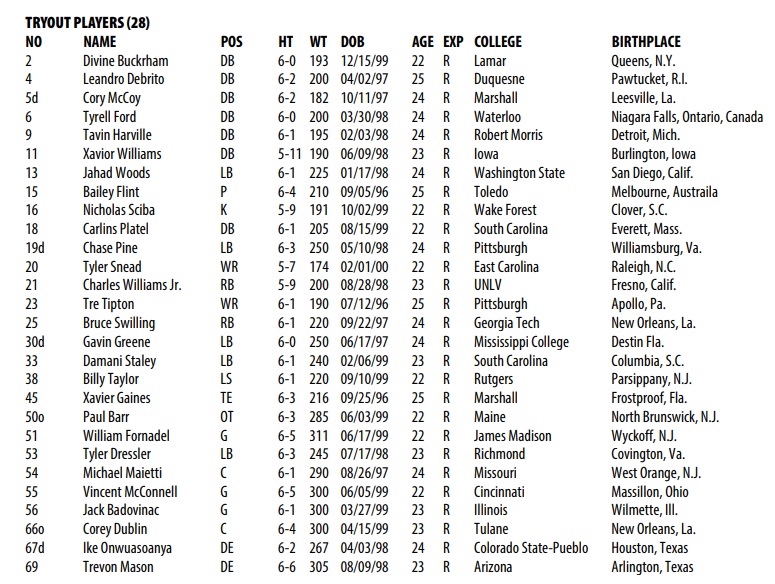 A list made up entirely of rookies. No veteran players like you’ll see in some other camps. As we noted earlier, the list includes Gavin Greene and Damani Staley, sons of the late Kevin Greene and Duce Staley respectively. Many of the tryout names were reported prior to rookie minicamp so the bulk of this list doesn’t come as a surprise. Two players reportedly attending minicamp aren’t on the Steelers’ list – Toledo OL Vitaliy Gurman and Louisiana Tayland Humphrey.

Other notable names on this list include Wake Forest K Nick Sciba. One of the most accurate kickers in college football (89.9% career FG rate), special teams coordinator Danny Smith attended his Pro Day. Missouri’s Michael Maietti was an AP All-SEC 1st Team player this past season and comes with a ton of starting experience. There are several local products too, including Pitt WR Tre Tipton and LB Chase Pine, Duquesne DB Leandro Debrito, and Robert Morris DB Tavin Harville.

While most tryout players won’t be signed to contracts, Pittsburgh often inks one or two names to deals. Past notable tryout players to sign with the team include LB Terence Garvin, QB Duck Hodges, and WR Marcus Tucker.  We’ll keep you posted if any of them sign on Sunday or Monday.