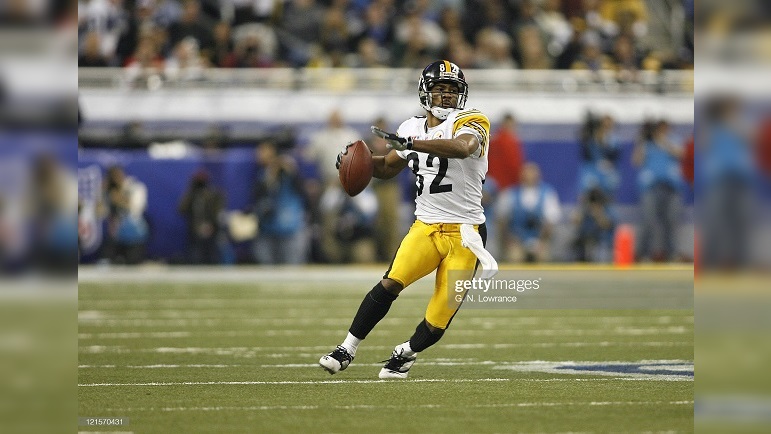 We’re getting close to it being 6,000 days since the Pittsburgh Steelers beat the Seattle Seahawks in Super Bowl XL, and even so, one play from that game continues to stand the test of time. That one play I am referencing is the 43-yard touchdown pass from Steelers wide receiver Antwaan Randle El to wide receiver Hines Ward that essentially put the game away for good for Pittsburgh.

Why is that play being referenced today? Because it was the top non-quarterback pass play of all-time on the list put together Thursday morning by Jane Slater of the NFL Network on Good Morning Football.

“Top non-QB pass of all time, let’s go to Super Bowl XL, Seahawks and Steelers in Detroit. Now this is when the Steelers were up 14 to 10 at the start of the fourth quarter. That’s when former Indiana quarterback Antwaan Randle El got a chance to show off his arm on the biggest of all stages,” Slater said Thursday morning.”

Show off his arm indeed. Randle El hit Ward with a deep touchdown pass on a reverse trick play that put the Steelers up 21-10 with 8:56 left in the fourth quarter. The play happened on a first and 10 from the Seahawks 43-yard line.

As the story goes with that play, Fake-39 Toss X-Reverse Pass, then-Steelers offensive coordinator Ken Whisenhunt was the one that drew it up. The design called for quarterback Ben Roethlisberger to pitch the football to his left to running back Willie Parker, who would then hand off to Randle El on the reverse. The wide receiver would then attempt to throw a pass downfield to Ward.

According to several different accounts over the years, the Friday before the Super Bowl XL, the Steelers ran the play at practice and failed repeatedly as Randle El kept overthrowing Ward. Even so, then-head coach Bill Cowher reportedly pulled Whisenhunt aside and reminded his offensive coordinator that since they didn’t have a game the following weekend, they might as well utilize everything in their playbook against the Seahawks.

That play, which the Steelers had also run successfully earlier that season against the Cleveland Browns, obviously went as planned. Randle El took the ball, faked the reverse, and threw to Ward, who was open on a deep crossing route. Randle El said after the game that he thought the ball was perfect, and it was.

“As soon as I let go, I was like, ooooh, catch it!” Randle El said after the Steelers won Super Bowl XL. “And Hines did.”

Randle El had quite an NFL career when it came to him throwing the football. In fact, among players with at least 20 pass attempts in their career, Randle El has both the best completion percentage (81.5%) and QB rating (156.1) in NFL history, and that’s just for the regular season. He ended his NFL career having completed 22 of his 27 total pass attempts for 323 yards and six touchdowns.

Four of the six regular season touchdown passes that Randle El had during his NFL career came as a member of the Steelers. Two of those four came against the Browns, with both going to Ward.

Will that non-QB pass play stand the test of another 6,000 days? It just might, especially because it happened during a Super Bowl.