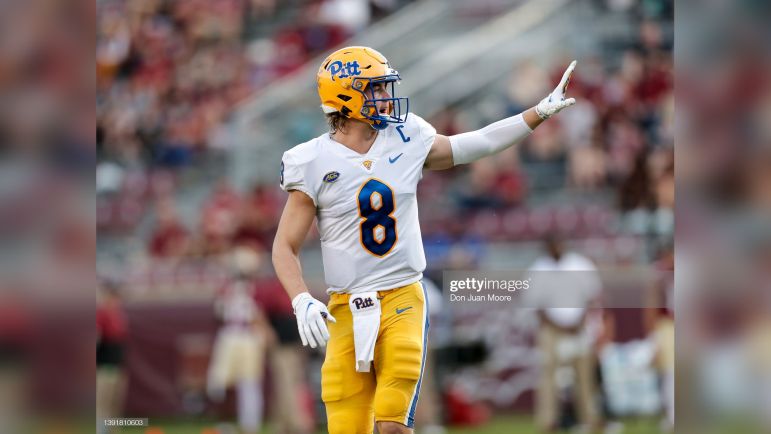 One big, important and hopefully by now, obvious reason the Pittsburgh Steelers had Kenny Pickett as their #1 QB on their board was his pro readiness. Picking the quarterback of the future is a difficult enough endeavor. Being able to see a bit clearer through the fog brought Mike Tomlin a word he rarely uses. Comfort.

The common trait associated with Pickett throughout the pre-draft process was his “pro-readiness.” A term that gets thrown around plenty. This guy is Day One ready. Or used as a negative for prospects like Malik Willis. He isn’t Pro Ready, he’ll need time.

So what does that mean? Short answer, a lot of things. But today’s film room can hopefully offer a small window into what Pickett offers and why he fits well with what Matt Canada wants to accomplish. We’ll break it down in a couple of areas.

Pickett’s Pitt offense under OC Mark Whipple (Ben Roethlisberger’s first QB coach, by the way) was similar conceptually to Canada’s. One common thread is the use of under-center work and pre-snap motion. Similar stuff in both systems. Great example from Pickett last year. Initially in the shotgun, the two tight ends shift and flip from the boundary to field side of the field and Pickett aligns under center.

The two receivers are in nasty, reduced splits and the boundary side receiver motions at the snap with Pickett handing it off to him on a jet weep.

The intent here is to flip the offensive’s strength. The play begins with a FIB look (football in boundary) and ends with the strength being flipped to the field side, where there’s more room to run the jet action. But the defense has to adjust on the fly instead of being able to immediately align as the offense breaks the huddle.

Apply it to Pittsburgh. Hall of Fame game last year. Mason Rudolph starts under center, not in the gun, but it’s  similar pre-snap action. Align in the boundary pre-snap, fake the tight end shift, have the receiver motion across and then come back to where he started on the jet WR run.

Some differences but overall, the same idea of motion to keep the defense having to realign and communicate cleanly on the fly.

The boot game will be a large part of Canada’s offense this year. Not something he could do as much with Ben Roethlisberger but if you watched the QBs in camp last summer, they worked on it early in practice every single day. Part of the warmup drills QBs Coach Mike Sullivan would take them through.

Example from Pickett. False key by pulling the right guard to really sell the run fake. Boot to the field. No flat option here but Pickett hits the wide receiver running a post-corner route. Pickett fits the ball in on the run, a little behind but it gets there, and the receiver breaks the tackle and races into the end zone.

Compare it to Pittsburgh. Last year against the Bengals. Roethlisberger under center on this split zone fake, rolls to his right, and he hits Diontae Johnson on the crosser from #1 backside. Accurate on the run for a good gain.

Different scenario but here, you see Pickett show arm strength and accuracy while moving to his right. Feels the nickel pressure, slides to his right, keeps his eyes downfield, and puts this one in front of his receiver. It’s a step in front but at the NFL level, will probably be caught if the receiver is able to better maintain speed as he tracks the football.

Less of a focus on Canada’s offense here and just taking a look at Pickett’s QB play and why he was considered “pro-ready” and how that translates to the tape.

Last year at home against North Carolina. Single-high look with the safety to the top hash (38 yard line, at the marker) rolling down over #3 as the overhang defender blitzes against the left tackle. Pickett knows he has Cover 1. He looks to the left to hold the safety and keep him in the middle of the field, looks back to his right, and hits the receiver deep down the right sideline, the running back on the post/wheel concept that got two UNC defenders bumping into each other.

If Pickett doesn’t hold the safety, there won’t be enough space for him to fit this throw in. But he does and it’s a huge gain inside the five. Eye manipulation to create space is what he’ll have to do at the NFL level.

Now a clip against Clemson. Gets zone-clue with the pre-snap motion and on the snap, sees both safeties drop to the deep half. It’s Cover 2. Smash concept to the bottom (curl/corner) with a corner/over combination to the top. The Tigers’ defense gets depth here so Pickett “takes a profit” by checking it down to the back. Not a huge gainer but the right decision with how loose the coverage was.

This came on 2nd and 6, not 3rd and forever, and it picked up the first down. The smart, right read, and you can see Pickett go through his progressions above. Looks right, looks left, then finds his checkdown, with his eyes and feet connected to make an accurate throw.

Another clip. Late-rotation here from the Tigers. They show a potential two-high or quarters look pre-snap but rotate to Cover 3 with the middle defender dropping out deep.

Pickett is again reading the smash concept to the bottom. The linebacker expands and gets width, the deep 1/3 corner takes away the corner route, and Pickett smartly and quickly hits the top of his drop to connect with the curl route underneath for a profitable gain. 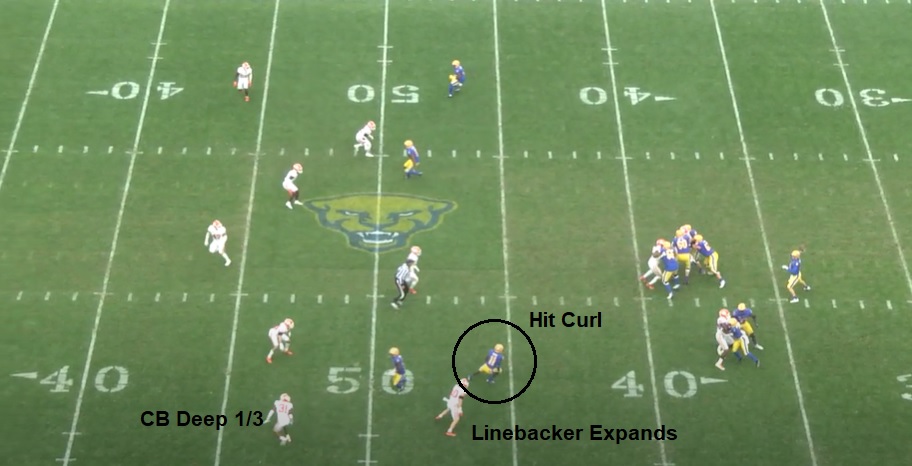 Not a flashy play but the correct read that keeps the offense on-schedule.

Last clip. Less about the read or defensive concept and more focused on Pickett’s overall command of the offense. He was in charge as a fifth-year senior for the Panthers and took hold of the offense. You can see all the pre-snap work here.

Pickett gets #4 lined up correctly. That’s WR Melquise Stovall, a senior but transfer to the Panthers for the 2021 season. So a “rookie” in their offense and system Pickett is aligning. He then, and this is a little more standard and structured, motions #3 across the formation.

Again, he gets a zone clue here with all the motion and the Tigers are playing Cover 3. Pickett goes through his reads and hits his checkdown to the running back, who makes a man miss, creates, and picks up a solid number of yards.

That’s the readiness. It isn’t 60 yard bombs and juking linebackers out of their shoes. It’s running the show, efficiently and confidently. And that was one of the best part of Pickett’s tape and makes it no surprise why he was so good in situational football, third down and red zone. It’s what’ll allow him to push Mitch Trubisky for the starting job this summer.