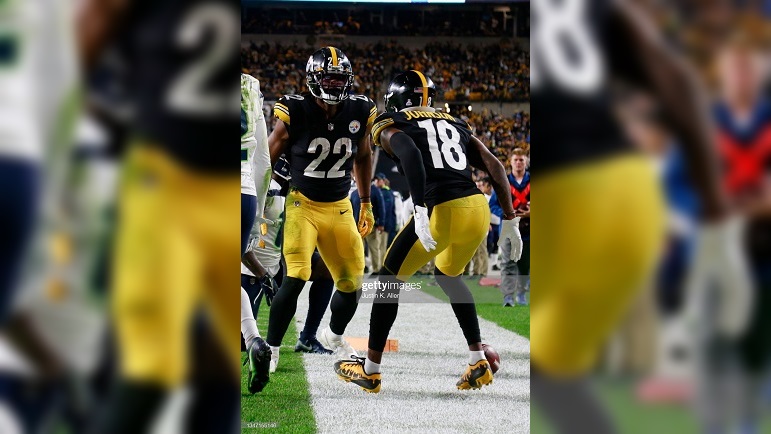 Jared Dublin of CBS Sports recently posted an article ranking the offensive “triplets” of all 32 NFL teams. According to Dublin, the crew at CBS Sports has ranked the NFL teams in this facet the last four seasons with the fifth rendition of the rankings for the 2022 season just being posted.

In Part I of this series, Dublin ranked the bottom-feeder teams in the league, going from 32-to-17. Dublin had the Pittsburgh Steelers triplets of QB Mitch Trubisky, RB Najee Harris, and WR Diontae Johnson come in at #25 in the rankings with an average ranking of 25.5 amongst the CBS crew. When giving an explanation as to why Pittsburgh came in so low in the rankings, Dublin stated one player of the triplets submarined the team’s ranking: Mitch Trubisky.

“Trubisky was apparently the greatest backup quarterback of all time in Buffalo,” said Dublin regarding Trubisky. “Last time we saw him as a starter, it was not pretty. That’s why despite employing an extremely productive running back and a receiver who has been racking up catches every year, they still check in near the bottom of the league in these rankings.”

For context Pittsburgh came in with a better ranking than the triplets of the Carolina Panthers, New York Jets, New York Giants, Houston Texans, Chicago Bears, Seattle Seahawks, and the Atlanta Falcons. However, Dublin had teams including the Detroit Lions, Jacksonville Jaguars, Washington Commanders, and New England Patriots ahead of Pittsburgh’s set of triplets in his rankings.

While we can agree that Trubisky hasn’t necessarily lived up to expectations thus far as the former #2 overall pick in the 2017 NFL Draft, I find it hard to believe that his previous play submarines the talented offensive duo of Najee Harris and Diontae Johnson behind the likes of Detroit, Jacksonville, Washington, and New England. Jared Goff was attached with two first-round picks to ship him out of Los Angles to acquire Matthew Stafford last offseason, and the combination of D’Andre Swift and T.J. Hockenson fails in comparison to Pittsburgh’s skill position players.

Dublin has the Jaguars triplets ahead of Pittsburgh when Trevor Lawrence played just as bad, if not worse than fellow former rookie QB Justin Fields last season who is ranked lower on the list. Add in the fact that James Robinson and Christian Kirk round out that set of triplets, and I personally find it hard to think that Pittsburgh’s trio doesn’t outrank them.

The Colts basically shipped QB Carson Wentz out of town due to his inability to help the team secure a playoff spot, putting him at least in a similar light to Trubisky who carries a 29-21 record as a starting QB in the NFL. Pair Wentz with Terry McLaurin and Antonio Gibson, and I would think an argument can be made that Pittsburgh can at least match the Commanders’ ranking, if not surpass it.

While I do recognize that Pittsburgh is entering murky waters this offseason without Ben Roethlisberger at the helm for the first time in nearly two decades, there does seem to be a lot of skepticism on the outlook of their offense being led by wither Trubisky or rookie QB Kenny Pickett.

This critiquing of the rankings published by CBS Sports shouldn’t be seen as a defense of Trubisky who has a lot to prove in his own right as he looks to hold off Pickett and Mason Rudolph for the starting QB job. Rather, the offensive output for Pittsburgh likely can’t take much of a nosedive from where it was the last few seasons with Ben near the end of his career, being limited as both a passer as well as creating with his legs off-script.

Trubisky should be an upgrade in both areas, thus likely putting him in that “game manager” role where he can keep the ship afloat for a Steelers team that has surrounded him with weapons in the passing game and a feature back who has proven he can carry the load. He may never achieve the potential he was drafted on, but he shouldn’t drop Pittsburgh in these rankings compared to other triplets listed ahead of them.