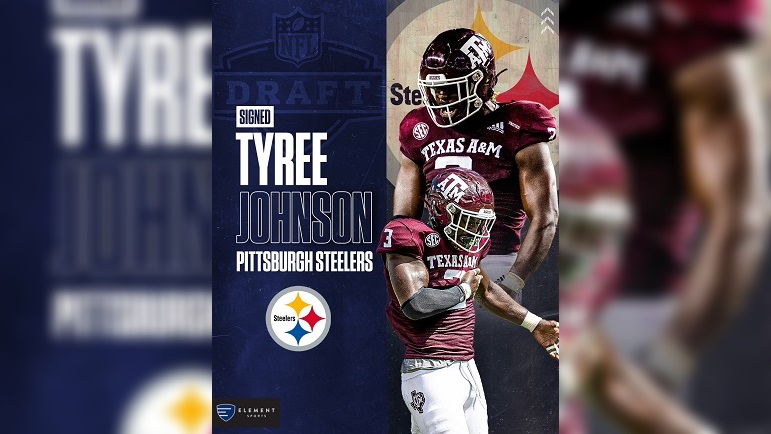 It is the job of an agent to tell the best version of their client’s story at every opportunity. That’s what they’re paid for. It makes up a core part of their utility. So to hear Pittsburgh Steelers college free agent rookie outside linebacker Tyree Johnson describe his client as a third-round talent with a sixth-round draft grade who went undrafted due to bad luck is to hear the machinations up public relations in action.

But there is always truth to the ideal tale, as well, and it is true that Johnson, whom the Steelers signed after the 2022 NFL Draft on a deal that included a $10,000 signing bonus, did have a string of bad luck in terms of injuries over the past year that prevented him from putting the best version of himself on the field.

His injury misfortunes began in-season, suffering a calf injury that he would have to spend much of the season playing through, yet he still managed to put up respectable numbers while being asked to play in a rotation for a Texas A&M front that also included the Steelers’ third-round pick, DeMarvin Leal.

On top of that, Johnson suffered a calf injury during practices for the East-West Shrine Bowl, which prevented him from participating in the game, or getting much tape out there, in what is one of the core promotional tools for late-round candidates such as himself.

Even at his Pro Day, his workout was cut short thanks to a false alarm—hearing a pop in his leg that turned out to be a scar-tissue byproduct. Essentially, as his agent, Michael Perrett, told Mark Kaboly for The Athletic, “He really didn’t get a chance to work out for anybody during the pre-draft process, and that’s where a guy who is a third-, fourth-, fifth-round talent with fifth-, sixth-, seventh-round grades”.

Of course, there’s always more to it than that. Was he going to be drafted in the third round if he had been perfectly healthy for the past 12 months? Probably not. Could he have been drafted? Certainly. But he and his agent believe he is in the right place to earn an opportunity.

“Life doesn’t always go as you expect when you get older”, Kaboly quotes Johnson as saying. “It is just about taking every opportunity that you get. I was very disappointed that I didn’t get drafted, but I am coming here and going to show them what we got. I was kind of willing to accept anything, any opportunity that came my way”.

He has an opportunity to find a spot on the Steelers’ depth chart on the edge behind T.J. Watt and Alex Highsmith. Standing in his way are Derrek Tuszka and Genard Avery, which was the sort of depth the team had last year when they went out and signed Melvin Ingram.

From Howard Jones to Jamir Jones, Pittsburgh does have a history of undrafted edge rushers showing up in the Summer and earning roster spots. They don’t all turn into James Harrison—or even Olasunkanmi Adeniyi, for that matter—but guys like Johnson, and fellow undrafted rookie T.D. Moultry, have a real chance to make a dent on the Steelers’ depth chart this year.