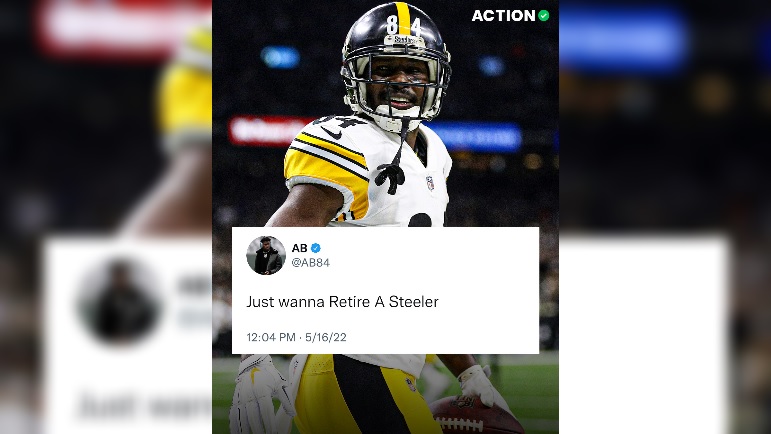 I don’t know if you’re up for more Antonio Brown news. But here we are. Brown is tweeting out his feelings this Monday, sending out this tweet a short time ago, expressing a desire to “Retire A Steeler.”

Does that mean returning and playing for the Steelers? Or possibly signing a one-day contract with the team, as players often do before they officially hang up their cleats. Brown has expressed his desire to continue his NFL career so perhaps he means the former.

Update: Brown clarified he wants to just retire as a Steeler. Not return to the team.

Not Play Jus Retire so we Clear

Of course, Brown burned just about every bridge imaginable on his way out of Pittsburgh, taking shots at the entire organization. Some of these figures are now gone, Ben Roethlisberger retiring with Kevin Colbert following suit, but the Steelers have downplayed interest in Brown at every turn.

In February of 2020, Mike Tomlin made it clear all “business’ ties with Brown were severed.

“We had great success over nine plus years with Antonio,” Tomlin told ESPN at the time. “We’re always going to be interested in his growth and development as a man. And we’ll be open to assisting him in that. But we have no current business interest at this time.”

Granted, Tomlin added the qualifier “at this time.” But it’s hard to see the Steelers’ opinion change now after adding George Pickens and Calvin Austin in this year’s draft. Brown, meanwhile, forced his way out of another team with by exiting stage left a member of the Tampa Bay Buccaneers last season. He’s also 34 years old and while his play last season was serviceable, he’s no longer the elite receiver worth the immense headache.

It’s hard to see Pittsburgh feeling the same way Brown does. But it’ll make for another offseason story. And Brown, like so many who have left the team, found out the grass isn’t always greener on the other side.

Assuming Brown’s return to the black and gold is only a dream that lives in his own head, he does seem to have a concert planned in Pittsburgh coming up. That might be as close to Heinz Field as he gets.

AB has a concert date in Pittsburgh coming up 🤔#Steelers #NFL pic.twitter.com/FQ84b6Fxmn