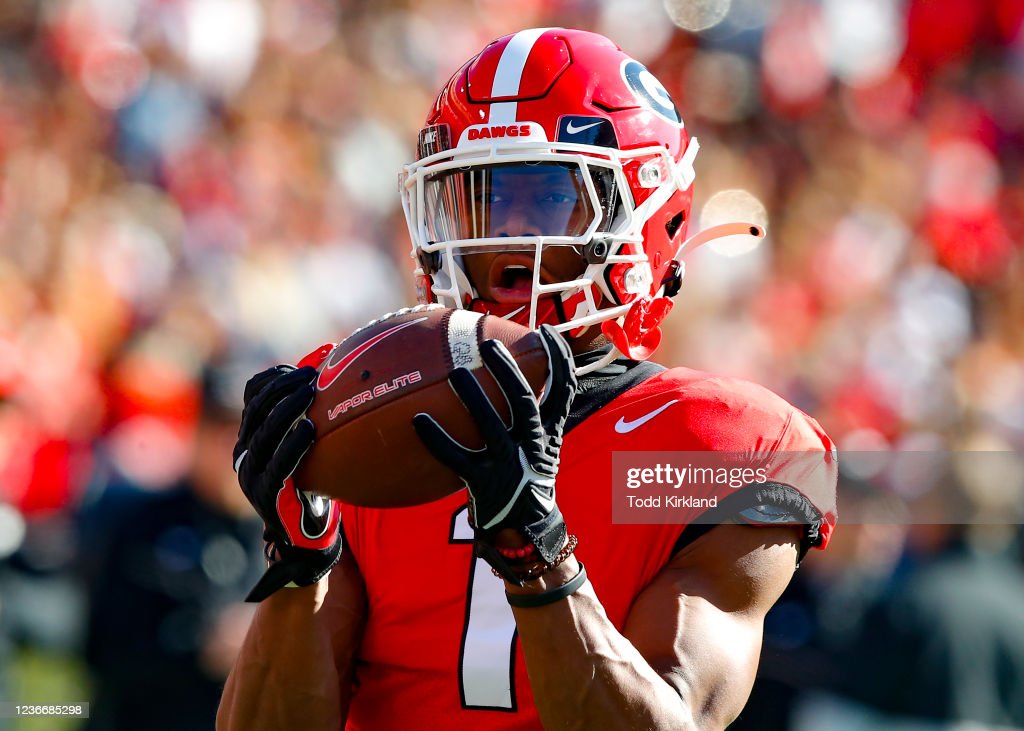 With the departures of JuJu Smith-Schuster, Ray-Ray McCloud, and James Washington this offseason, the Pittsburgh Steelers have a hole to fill in their wide receiver room. The team brought in WRs Gunner Olszewski from the Patriots and Miles Boykin from the Ravens after both were released by their respective teams, but its likely the team will also look to add a wide receiver via the draft, and probably on Day 1 or Day 2. Here are some names at receiver the Steelers could consider with an early or mid-round selection.

Pickens is an intriguing name as both Mike Tomlin and Kevin Colbert attended his Pro Day, and wide receivers coach Frisman Jackson put Pickens through his workout. Pickens had an impressive freshman season at Georgia, pulling in 49 receptions for 727 yards and eight touchdowns. After tearing his ACL during his sophomore season, Pickens wasn’t able to build upon those numbers, but he’s still a potential first-round candidate due to his ability. He’s big, standing at 6’3″ with really good downfield speed.

He excels against man coverage, as his body control and speed allow him to run crisp routes. He also has good hands and has shown the ability to make tough catches on off-target throws. Pickens is likely in play for the Steelers’ first-round selection, although he would probably more sense as a Day 2 selection if he’s there in the second round.

Ross has seen his stock fall after he only participated in the 40-yard dash and bench press at the combine, and his performance slipped after his sophomore year. Ross had spinal surgery that caused him to miss all of the 2020 season, and when he came back he only managed 514 yards, lower than the 1,000- and 865-yard seasons he put up in his freshman and sophomore seasons, respectively. Ross was being talked about as a potential top 10 pick after his sophomore year, but concerns about his ability to play outside the slot in addition to his slipping performance have pushed him into Day 2. Both Tomlin and Colbert attended his Pro Day, and Jackson put him through workouts, so there’s definitely familiarity between him and Pittsburgh.

Ross also had surgery to fix a stress facture in his foot that caused him to miss time this past season, and his injury history is definitely another concern. Just like Pickens, Ross is 6’3″, and that size helps him win jump balls and adjust to off-target throws. However, he doesn’t have great burst off the line and his lack of physicality is a problem. Going from someone like Smith-Schuster (one of the most physical receivers in the league) to Ross would be a noticeable difference just in terms of the physicality. Ross would likely be someone the Steelers would consider in the third round or later.

Dotson has a Pittsburgh connection, as Steelers’ assistant quarterbacks coach David Corley was his receivers coach at Penn State during his freshman season. Dotson had a monster season year in Happy Valley, with 91 catches for 1,182 yards and 12 touchdowns. While the 5’10″ Dotson doesn’t have elite size, his explosiveness and speed make him an intriguing second-round candidate. His ability to adjust on deep balls is impressive, and he has strong hands that help him help him avoid drops and are useful in contested catches. Dotson isn’t the best route-runner, especially in short routes. His small frame also has shown a tendency to prevent him from breaking big plays in short routes as his balance after contact is lacking. Dotson would be in play for the Steelers in the second round.

Pierce might not be in play until the third round, but he embodies what the Steelers look for in wide receivers. Pierce has experience on special teams, plays physical, and was a three-year starter on a Cincinnati team that just went to the College Football Playoff. Pierce began his career as a special-teamer and racked up six tackles in kick and punt coverage. Pierce’s Pro Day was also attended by Tomlin and Kevin Colbert, as well as Omar Khan, Brandon Hunt, Matt Canada, Mike Sullivan, and Dan Colbert.

Last season, Pierce snagged 52 balls for 884 yards and 8 touchdowns for the Bearcats as their No. 1 receiver. He’s a very good route runner, and his ability to adjust his routes and find space against zone coverage is a skill that will come in handy in the NFL. Pierce’s ball skills are very impressive, and he only had a handful of drops throughout his college career. He will need to be able to run a more complex route tree than he did at Cincinnati, and he could also stand to improve his burst on underneath routes.

Still, at 6’3″ with impressive speed, Pierce is an underrated prospect in this draft class.