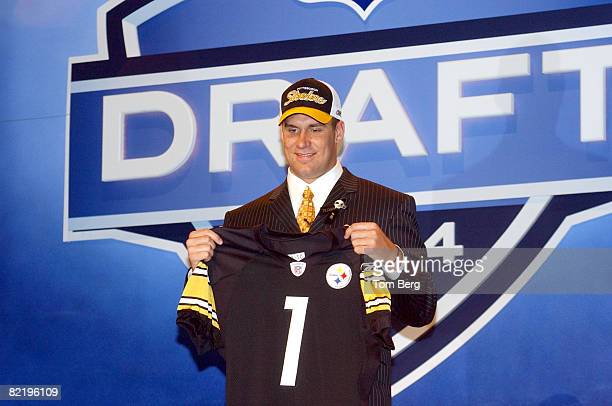 As we rapidly approach the onset of the 2022 NFL Draft this evening, we often look back at previous draft picks to try and get a sense of the direction our teams might go. Eighteen years ago in 2004, the Steelers faced another conundrum at the quarterback position similar to right now, and one in which paid immense dividends for the team as they selected Miami (Ohio) QB Ben Roethlisberger with the 11th overall pick. The 2004 draft class of QBs is widely considered to be one of, if not, the best ever, featuring Eli Manning, Philip Rivers, and Roethlisberger. However, the way it developed was a roller coaster to say the least, especially with him landing in the Steel City. In fact, Roethlisberger’s contingent thought he’d be playing for the Giants.

“Honestly, there, we had no clue, but we did think New York was like, the Giants was where, you know, it was gonna be there,” Roethlisberger said this morning, according to the DVE Morning Show’s Randy Baumann on iHeart Radio. “There’s that infamous clip of my college coach throwing the water bottle, his phone or something over to the table. And that was because he thought he had the inside scoop from Accorsi(Giants GM) that I was going there. “

After the Giants and Chargers notoriously swapped their selections of Rivers and Manning, respectively, his home state Browns were the next possible landing spot. Looking back, luckily for him, that didn’t come to fruition.

“I truly, when I said at the time that I would go anywhere to play, I mean looking back now, I guess I probably shouldn’t have wanted to go to Cleveland, but I’m glad I didn’t, no offense Cleveland,” Roethlisberger said laughing. “At the time, as a young guy, you’ll go anywhere, but I didn’t really think like, it wasn’t like when they passed on me, I was just like ‘oh my goodness, it’s the end of the world’.”

Luckily for Ben, the Steelers were in prime position to select him, a byproduct of their 6-10 season in 2003, which astonishingly is the last losing season the franchise has seen since. This still caught Roethlisberger’s whole contingent off guard, who actually expected to fall past Pittsburgh to Buffalo at 13. This falls in line with the previous reports of Bill Cowher wanting Arkansas offensive linemen Shawn Andrews with their pick, before being instructed by team owner Dan Rooney to make Roethlisberger the choice.

“No, I had, no, we had no clue about Pittsburgh,” Roethlisberger said. “Zero, zero. There was that, when I tell you that the next after the whole thing happened, we thought it was Buffalo. When we, we really did not think anything about going to Pittsburgh. Like that was when the phone rang. We all were like, ‘what in the world’? Like what’s going on? We had no clue. And the crazy thing was that’s the only place we went was Pittsburgh for our pre-draft visit. But, it was like the most, you know, basic visit. You never felt like that they were gonna do anything. So , I guess it made sense, in that capacity, but when I tell you the truth, we never thought Pittsburgh never got brought up at our table, truthfully.”

Ben also can recollect vividly that first phone call with Hall of Fame coach Bill Cowher, with whom he won his first Super Bowl championship.

“I remember, I’m almost positive [then agent Leigh Steinberg] answered the phone and was like, it’s, it’s Pittsburgh, Pittsburgh. And I was like, what? And he, and I remember like coach Cowher being on the phone and, and yes, it’s the first time I’ve ever been spit on through a phone. But you know, but still that’s coach Cowher. Right, it’s legendary. I mean, the fact that he’s on the phone, it’s like, holy cow, this is pretty cool.“

Looking back in hindsight, even his outfit screamed that he was destined to be a Steeler.

“I had like, you know, a couple different suit companies that wanted you to wear their suits, you know, for the draft obviously, he said. “And so, I had, I think at least three suits and I wasn’t sure what I was gonna wear. And I picked that suit just because, you know, for whatever reason and what’s the chance it was like a black suit with gold pin stripes, and the gold tie? I mean, what are the chances? I mean, it’s so, I think it’s cool, it’s fitting. I mean, can you imagine I’m holding up like a purple tie? I didn’t know where I was going. I mean, imagine me I’m wearing that and you know, a purple tie or something, some ugly AFC North colors? No, I chose the best colors.”

The rest, of course, is history. Roethlisberger went on to win two Super Bowls, the franchise’s fifth and sixth, while taking them to another. He’ll undoubtedly be a first ballot Hall of Famer when eligible in 2027, and go down as one of the greatest arms in football history.