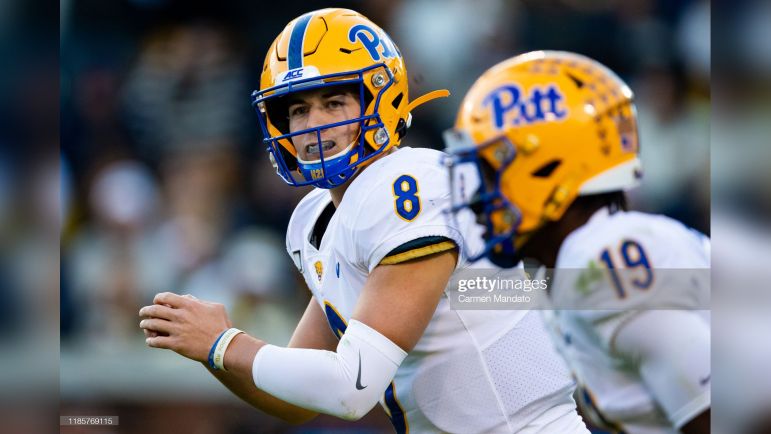 The Pittsburgh Steelers now have three quarterbacks in their room following their first-round selection of Pittsburgh quarterback Kenny Pickett last night. Regarded by consensus as the most NFL-ready quarterback in this draft class, the team has already allowed that he will be given the opportunity to compete for the starting job with Mitch Trubisky and Mason Rudolph.

It’s a path he’s been down before in his football journey, and certainly one that he isn’t surprised to encounter again, especially coming to a team like the Steelers, an organization that tends to enter the draft without major holes. He’s ready for the challenge.

“Yeah, I’m pretty familiar with competing. I’ve been doing it my whole life”, Pickett told reporters last night when he was asked about being drafted to a team already planning for a quarterback competition, and if he felt that he would have a clearer path with whatever team ended up selecting him.

“I know how to be a good teammate and compete at the same time”, he continued. “I’m excited to join the quarterback room, get to know those guys and honestly just get better every day. We’re all chasing a championship, so at the end of the day that’s all that matters. That’s what I’m excited to go do”.

The Steelers drafted Rudolph in the third round in 2018, using a third-round selection on him, though they had him graded as a first-round pick, or at least in the same group as the quarterbacks who were drafted in the first round, including Josh Allen and Lamar Jackson (and Sam Darnold and Josh Rosen).

Trubisky was drafted second overall by the Chicago Bears in 2017, well out of Pittsburgh’s range and well before they were desperately in the market for a franchise quarterback, but Player Personnel Coordinator Dan Rooney Jr. recently talked about how much they liked him coming out of college and how excited they were to have the opportunity to bring him in now.

The Steelers signed him as an unrestricted free agent this offseason, inking a two-year contract with a base value of $14.25 that could rise to $27 million via incentives, the bulk of which is based on playing time. Those incentives will be made harder to achieve with Pickett now (or rather still) in the building.

I would imagine that Pickett will still begin the 2022 season as a backup—probably ahead of Rudolph, who may at this point even be traded), but I don’t imagine anybody would be surprised if Pickett is in the starting lineup at some point by the end of the regular season.

After all, they talked extensively about how one of his premium qualities was his NFL readiness, so if he isn’t ready to start in November, how confident can they be that he will be the starter they drafted him to be in 2023 or 2024?