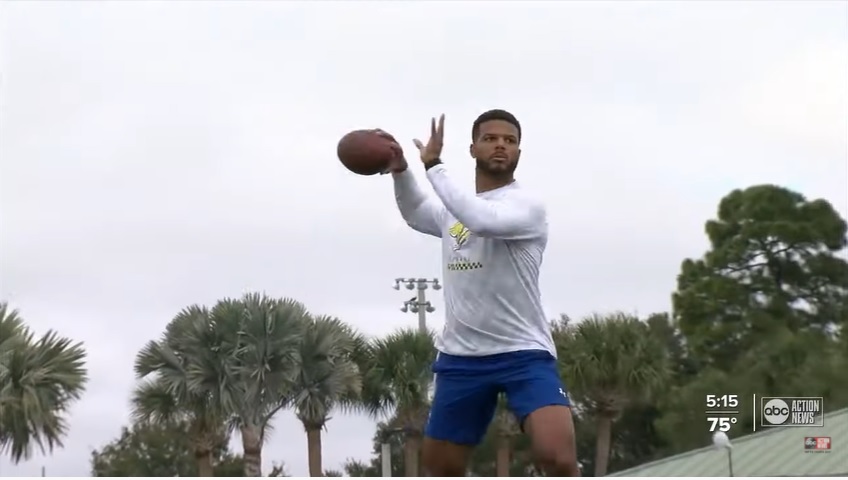 Coming into a new team as a rookie can be a really difficult, considering it’s a new city, unfamiliar faces and an unfamiliar playbook.

Fortunately for new Pittsburgh Steelers’ quarterback Chris Oladokun, he will have at least one familiar face in the Steelers’ locker room upon his first day.

Some Chris Oladokun clips. Thought he showed ability to throw with zip and touch when he needed to. Slighter frame and doesn't have a huge arm but it's functional. #Steelers pic.twitter.com/d2D2dKk19s

Oladokun, who was selected at No. 241 overall in the seventh round of the 2022 NFL Draft as the final pick in the Kevin Colbert era, has a long history with Johnson, having played against him in high school, and he even throws with him in Florida throughout the offseason.

“I do actually,” Oladokun told members of the Steelers’ media Saturday when asked if he knows Johnson, being a Florida native and all, according to the official transcript. “We work out at the same gym down here in Tampa, so I’ve known him forever. I’m glad I get to now be a teammate with him after playing against him for so long.

“Yeah, so we’ve thrown a bunch down here,” Oladokun added regarding his relationship with Johnson. “We were actually just talking the other day about getting some work in this week, so now that we’re teammates, we’re definitely going to be on the same accord.”

What a nugget that is from Oladokun.

It’s very likely the Steelers knew about that connection, and probably heard some good things from Johnson about Oladokun in general, especially after the Steelers showed interest.

Having that familiarity with Johnson dating back to high school, along with throwing with him in the offseason should help Oladokun at least hit the ground running, in terms of getting familiar with the playbook through some help with Johnson, while also having a familiar face to throw to in off-season workouts, minicamp, and even training camp.