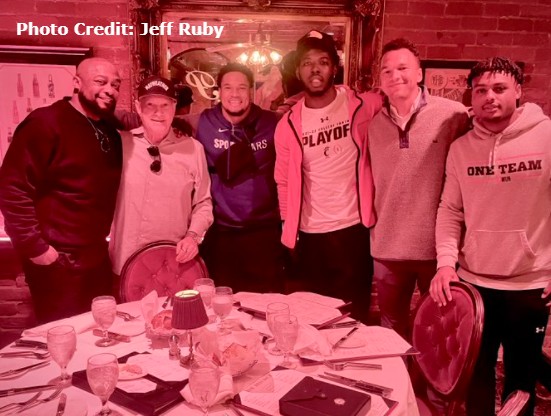 No one relates to those Johnny Cash lyrics more than Mike Tomlin over the last two weeks. After spending Wednesday afternoon watching Ole Miss’ QB Matt Corral’s workout, Tomlin was in Cincinnati by the evening to dine with Bearcats’ QB Desmond Ridder, whose Pro Day workout is tomorrow.

Great seeing ⁦@CoachTomlin⁩ & ⁦@desmondridder⁩ again. I wanna thank all the NFL coaches and players dining at our Cincinnati restaurants. Have a great day tomorrow. BTW I’m a Bengals fan and Mike is a terrific guy. They are not mutually exclusive. pic.twitter.com/LZVCkqILj1

That means we’ll see Tomlin – and almost certainly Kevin Colbert and others – at Ridder’s workout Thursday. Ridder is one of the better quarterbacks in this class though he’s been considered a late Day 1/Early Day 2 candidate.

A four-year starter, he threw a career-high 30 touchdowns in 2021, leading his team to a school-record 13-win season and College Football Playoff berth, though they lost in the first round to Alabama. Ridder has a good all-around skillset, enjoyed a nice Senior Bowl week, and tested off the charts at the Combine with a 4.49 40, 36-inch vert, and 10’7″ broad. It produced a 9.8 RAS score, making him one of the most athletic QBs since 1987.

He rushed for 28 touchdowns in his college career, including 18 over his final two years.

Pittsburgh has now done their homework on four of the top QBs in this class. The week began with Kenny Pickett’s Pitt Pro Day followed by a Monday dinner/Tuesday workout of Liberty’s Malik Willis. Wednesday featured Corral, Wednesday night/Thursday centered around Ridder, and it’s logical to assume they’ll be at Sam Howell’s North Carolina workout on Monday, too.

The fact all these quarterbacks are checking the Pro Day boxes makes it harder to determine which guy the Steelers will actually draft. But it shows how serious they are about the position and the odds of them drafting a quarterback, while not certain, are high. It’d be a lot of homework to do on the position at the expense of others to not wind up taking one.

We’ll keep you posted tomorrow on how all is exactly there for Cincinnati. It’ll be Tomlin, Colbert, probably Brandon Hunt, and possibly Dan Rooney Jr. Perhaps even QBs Coach Mike Sullivan will make an appearance. He’s yet to travel with Tomlin or Colbert but has had plenty of time to head east after spending Monday at Nevada to watch Carson Strong.