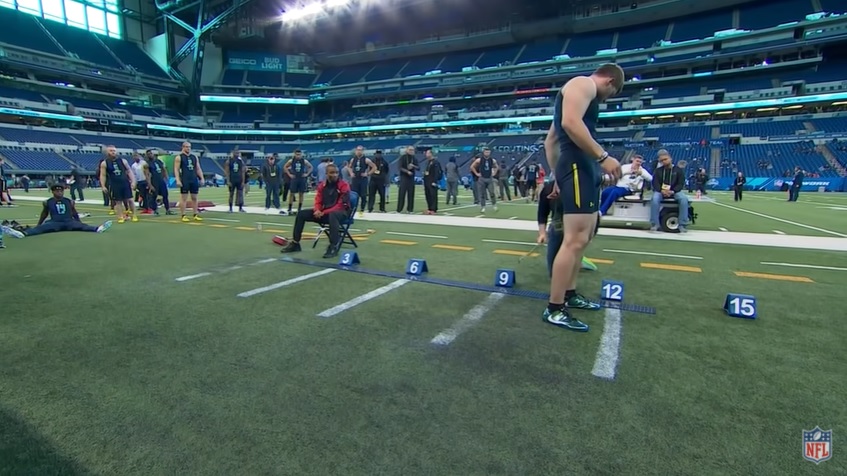 The 2022 NFL Combine has officially kicked off with the first on-field workouts taking place starting Thursday. With that in mind, I wanted to take a quick look at Steelers currently on the roster who had some excellent Indy workouts that no doubt helped them become Steelers.

Of course, Combine testing is not the end-all. If anything, it can be overvalued. But those are all things we tell ourselves until we start drooling over a receiver who runs 4.41 and jumps 41 inches.

Here’s a look at some of the most memorable performances by present-day Steelers.

Claypool had a stellar 2020 workout. Which was a good thing considering the start of the COVID pandemic wiped out most of the Pro Day circuit. Claypool’s numbers regardless of size are off-the-charts good. But for a player of his size, 6’4, 229, to do that is incredible. To put it in perspective, Claypool’s RAS score nearly matches Calvin Johnson’s, arguably the best “freak” receiver of his generation.

Of course, Claypool isn’t Megatron and his 2021 season was disappointing. But the traits he displayed at Indianapolis turned plenty of heads. Including the Steelers.

While Watt is weirdly viewed as this try-hard grinder by many outside sources, the truth is he’s an A+ athlete who has the second-best RAS score of anyone on this list. His testing thanks to that Watt DNA probably made the Steelers more comfortable with making him their pick after Watt battled knee injuries and a position switch at Wisconsin.

While there are many cautionary tales on this list, Watt isn’t one of them. He was a grand slam pick and is coming off a DPOY season.

Edmunds’ numbers were elite of his class and really for any safety. It’s likely one reason why Pittsburgh rolled the dice on him as a surprise first-round pick, though most draft analysts believe he would’ve been selected early in the second round had the Steelers not made him their pick.

Edmunds has flashed that athleticism in spurts but has struggled to consistently play to the way he’s timed, a classic case of how Combine testing doesn’t always translate on the field. But his RAS score is one of the best the Steelers have drafted under Kevin Colbert.

Witherspoon is one of the new age freaky cornerbacks to try to match up against the receivers who test like Claypool. Tall with long, 33 inch arms, he tested off the charts at Indy back in 2017. Though he was a raw and relatively inexperienced player, testing like that got him picked up in the third round. And the Steelers reaped the benefits of that athleticism the back-half of 2021 with Witherspoon turning into the team’s best cover corner down the stretch. His RAS score is better than Jalen Ramsey’s.

Johnson was briefly signed to the practice squad late this season and re-upped with a futures deal after the Steelers’ season ended. But Johnson first earned NFL buzz thanks to a great Combine workout. Nearly cracked the 4.3’s in the 40 with a solid vert and broad especially when you consider his long, receiver-looking size. Johnson, in fact, spent his first two years in college as a receiver before flipping to cornerback.

He became a fourth round pick of the Raiders and while his NFL career hasn’t panned out, those traits have probably kept his pro hopes alive. He’s a long-shot and many like him have come and gone before, does anyone remember Stephen Denmark, but he’s a classic Combine workout warrior.

Dobbs was one of the most athletic quarterbacks to come out of the 2017 draft with a blend of size and athleticism. His numbers don’t wow in the way of the guys at receiver or corner but for a quarterback, they are impressive, leading to that top RAS score.

Dobbs has flashed his athleticism in the preseason but he hasn’t had much of a chance to do so in the regular season. A free agent to-be, he probably doesn’t have a great path to compete in Pittsburgh.

What Bush lacked in size he made up for with his A+ testing with incredible numbers across the board. Looking to replace Ryan Shazier, the Steelers moved from #20 to #10 to acquire him. Bush has shown that athleticism in moments but he struggled with the physicality of the game and had a difficult 2021 coming off his torn ACL. He’ll need to flash that explosion and speed to get his career back on track.

Of course, there was no 2021 NFL Combine so these are Green’s numbers from his Pro Day. But I’ll count it just the same here.

Not too many offensive linemen show up on these lists but Green certainly qualifies. It was his athletic testing and overall traits that made him the Steelers’ pick in the 2021 NFL Draft. Players in general are getting more athletic, linemen included, as training becomes more intense and specialized.

Green struggled to positively showcase that athleticism on a consistent basis as a rookie. But if the Steelers stick with him this offseason, it’ll be in part due to those traits and the upside that comes with him.

Like Green, Johnson never had a chance to go to and workout at the Combine. So his Pro Day numbers will have to suffice. Good numbers across the board. Not quite at Devin Bush’s level but the vert and broad jump numbers come class. Johnson will have a chance to compete for more playing time in 2022.

Here’s a name I bet you didn’t think would end up on this list. Long ago, Aluau was the 10th overall pick of the 2010 draft by the Jaguars. He had a strong pre-draft process at All-Star games and his Combine workout in an era where freaky numbers weren’t so common. Alualu ran in the 4.8’s with a great vertical and solid broad jump. His underrated athleticism and overall great durability (until a freak ankle injury in 2021) has given him plenty of league staying power.