With today being Sunday, and with the 2022 NFL league year free agency signings starting to slow to a crawl, now is the perfect opportunity to update where the Pittsburgh Steelers currently sit from a salary cap standpoint.

Now, let me remind everyone that a lot of the numbers that you are seeing across the internets right now are not real-time numbers. For example, Over the Cap currently has the Steelers $21,061,376 under the cap. That number is based on just 67 players under contract. 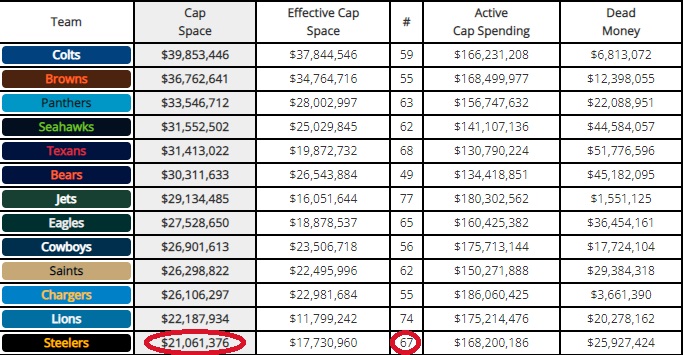 As it stands right now, the Steelers have 72 players under contract following them agreeing to terms with wide receiver Gunner Olszewski, and following the releases of tackle Zach Banner and inside linebacker Joe Schobert. If you look closer, they have yet to account for several players. That list of players includes Olszewski, quarterback Mitchell Trubisky, defensive tackle Montravius Adams, offensive lineman Mason Cole, and cornerback Ahkello Witherspoon. Why don’t they have those four players accounted for? Because the official numbers related to those contracts have yet to surface.

For a comparison sake, the NFLPA still has the Steelers with 66 players under contract as of Sunday morning and that’s because several contracts have not hit their database either. This is why you see some many different numbers floating around the internet right now.

So, with at least five contracts outstanding, there is some estimation that needs to be done. Luckily, we know the total value of those five contracts, and thus it’s easy to get close when projecting 2022 salary charges for each base on how the Steelers do business. Even so, we can only go off of close projections until the real numbers are known for those four outstanding contracts, which will likely be on Monday or Tuesday.

Below is a look at where the Steelers currently sit as of Sunday morning based on my projections for those four outstanding contracts. In short, I have the Steelers roughly $12,019,710 under the cap based on the Rule of 51, which is used during the offseason.

Below is an estimated breakdown and a future outlook for the Steelers’ 2022 salary cap situation as of Sunday morning. 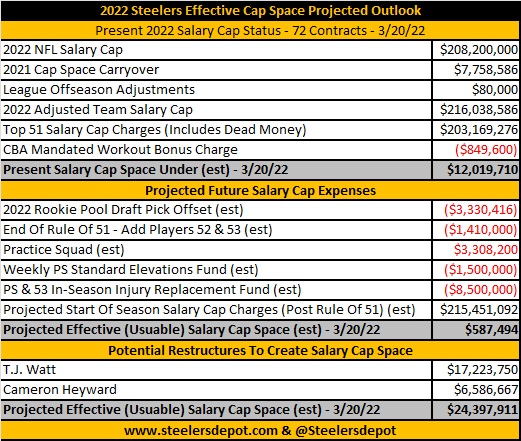