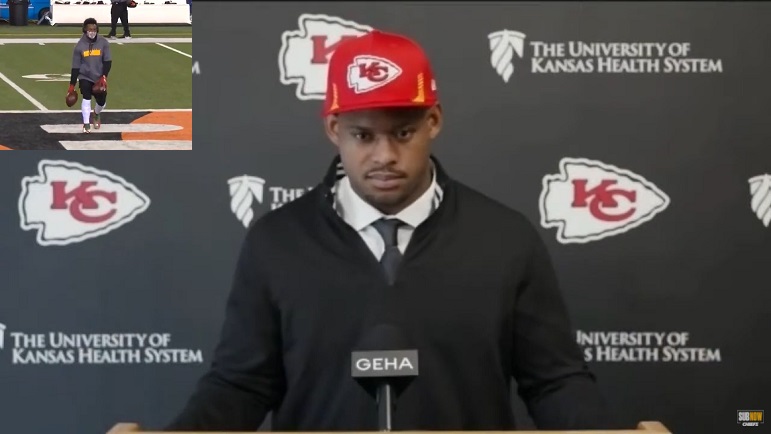 Quite a bit was made about the TikToks that wide receiver JuJu Smith-Schuster made during his career with the Pittsburgh Steelers and especially the ones that include him dancing on the logo of opponents before road games. On Sunday, Smith-Schuster met the media for the first time after signing a one-year contract with the Kanas City Chiefs and during his session he was asked about his big social media presence, and specifically about the criticism he’s received for his TikTok logo dancing.

Smith-Schuster’s response came after he was essentially asked about him possibly being more concerned about his brand than winning and what, if anything, did he learn from that past experience, and more importantly, if he sees himself doing more of that kind of TikTok-ing, if not less, in a Chiefs’ uniform.

While the 2021 season certainly didn’t play out the way that Smith-Schuster thought or hoped it would after he re-signed on a one-year, $8 million deal a year ago, the Steelers former second round draft pick out of USC made it clear on Sunday that he had no regrets when it comes to him rebuffing the offers he received in free agency last year from either the Chiefs or the Baltimore Ravens.

“Yeah. I have no regrets on my decision last year,” Smith-Schuster said.

Smith-Schuster also talked some on Sunday about having Chiefs head coach Andy Reid being part of the recruitment effort to sign him away from the Steelers one year ago. He was asked to talk about just how much those conversations last year stuck with him as he went through free agency this year.

” I mean, it’s one thing for a head coach, who just won the Lombardi trophy, and for him to text me personally, you know, it means a lot,” Smith-Schuster said. “And going into this year’s process, you know, KC’s been on me for the past two years, so obviously I feel welcomed here and appreciated. So, coming here and having an opportunity to play here for him is a great experience.”

“It’s good to be on the other side, finally,” Smith-Schuster said. “I think for myself, I love Pittsburgh. The fan base was amazing there. They took me in for about five years and obviously coming into this year, although playing my last game in Pittsburgh in Arrowhead and starting off my new season in Arrowhead, it’s gonna be unbelievable, man. I heard the fan base is amazing so I can’t wait to embrace them.”

As far the kind of money Smith-Schuster will embrace in 2022 as a member of the Chiefs, it’s totally up to him and how he and the team perform. According to Mike Florio of Pro Football Talk, Smith-Schuster’s one-year, $10.75 million deal with the Chiefs has a base value of just $3.25 million. Of that amount, only $2.49 million is fully guaranteed at signing. He has workout and per-game roster bonuses included in his contract that he can earn as well. To earn the entire $10.75 million in 2022, Smith-Schuster will need to hit all his incentives with some those likely tied to the Chiefs making it deep in the playoffs.