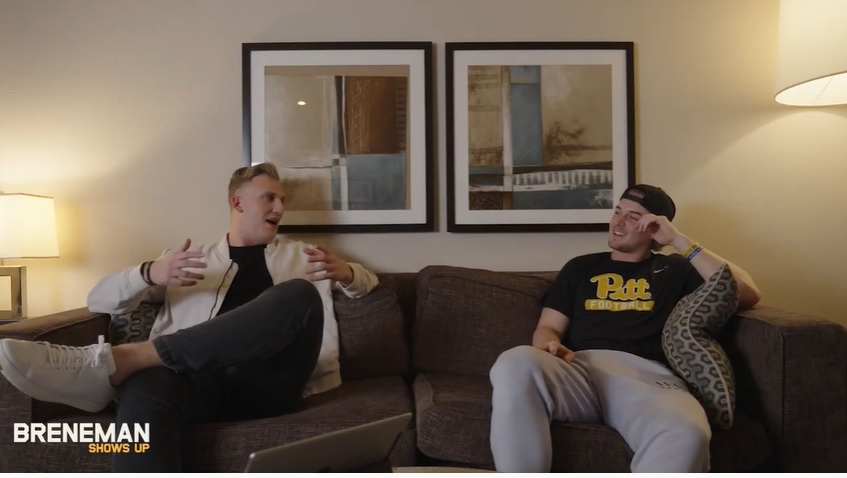 If Kenny Pickett gets drafted by the Pittsburgh Steelers, he’ll be greeted by familiar faces in the locker room. With the Panthers’ facility next door to the Steelers and recruiting ties to the coaching staff, the Steelers know Pickett as well as anyone.

Pickett joined the podcast Adam Breneman Shows Up to discuss his relationship with the team in referencing what team he could go to.

“It doesn’t matter the team honestly,” Pickett said. “Like I said, it would be awesome to play for the Steelers, played next door for five years of practice. Heinz Field was my home for five years, comfortable playing there. It would be awesome. Coach Canada recruited me. I’m tight with Coach Tomlin, had a lot of conversations with him. But like I said, wherever, it’s a dream. The NFL is a dream and there’s a lot that comes with it.”

Coming out of high school, Canada – then at Pitt – helped recruit and convince Pickett to commit to the Panthers. But the two never officially worked together. His official visit came on December 9th, 2016, and five days later, LSU announced Canada was being hired as their next offensive coordinator. Now the Steelers’ OC, the two have a chance to reunite and work in the same building.

Pickett says he considered decommitting from Pitt but is glad the school convinced him to stay.

“I’m committed, I’m gonna enroll early,” he said after committing to the Panthers. “Canada leaves a week before I step on campus. So there was a time where I was gonna flip to North Carolina because Coach Narduzzi isn’t not an offensive guy. They had no offensive staff. And I know it’s like the carousels crazy in college, but you wanna at least give yourself the best chance to, to succeed.  have no clue who my OC is gonna be. At the end of the day, talking to Coach Narduzzi, he’s like, ‘you just gotta put trust in me. I’ll get you the right guy.’ He got Coach Whip down the road, man. He got the right guy.”

Coach Whip is Mark Whipple, who helped develop Pickett into a first-round prospect before leaving late last year to become the OC at Nebraska. Whipple was Ben Roethlisberger’s first NFL QB coach and has close ties to the organization. Pickett coming to Pittsburgh would be less of a jump and more of a step, though there’s still a curve for any rookie, especially at that position.

Though Pittsburgh would be the “easiest” place for him to go, like any prospect, Pickett is willing to go to whichever team drafts him.

“I want to go anywhere. Highest pick possible man. They kind of took one of my quotes, I said like, ‘oh, it would be awesome to play. [in Pittsburgh].” It would be awesome. They could have asked me any team anywhere There could be a new team that pops up in Alaska. They pick me first overall, I’m doing backflips. I’m hopping on a plane and going.”

Despite routinely seeing him at school, the Steelers certainly have done their homework on Pickett throughout the process. They watched him and the other top quarterbacks down at this year’s Senior Bowl and “sent” the house, even though they’re already there, for this Panthers workout. Right now, his two most likely landing spots are the Carolina Panthers at #6 – head coach Matt Rhule also heavily recruited Pickett out of high school – or Pittsburgh, either at #20 or via a trade-up.

Still, he’s far from the only quarterback they have eyes on, doing extensive work this week on Liberty’s Malik Willis and Ole Miss’ Matt Corral. With two more key Pro Days coming up, Desmond Ridder’s Thursday and Sam Howell’s Monday, the team is conducting a thorough search for their next quarterback. Pickett is one of the top names on that list.