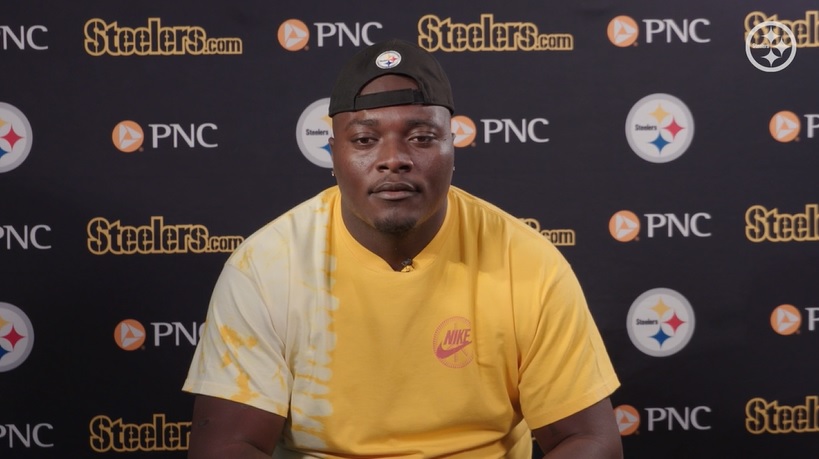 It’s not often that you are able to find a key contributor in the middle of a season off of another team’s practice squad, but that is what the Pittsburgh Steelers believe they found in 2021 when they plucked defensive tackle Montravius Adams off of the New Orleans Saints’ squad.

The fifth-year veteran took a roundabout way going from Green Bay to New England to New Orleans over the course of the calendar year of 2021 before finally arriving in Pittsburgh on November 30, but it didn’t take him long to feel at home and that this is where he wanted to be.

His play proved beneficial to the Steelers, as well, and that turned into a two-year pact this offseason to keep him around, on a $5 million contract. With the defensive line getting healthy after last season’s issues, however, he’s ready to fit in and work with the returning Tyson Alualu at the nose.

“I feel like we would be a nice one-two punch”, he told reporters yesterday. Alualu is going into his sixth season since joining the Steelers in 2017. He took over the nose tackle role from Javon Hargrave in 2020 and impressed, but he missed most of the 2021 season after fracturing his ankle in Week 2.

Adams is looking forward to getting to know the rest of the group better, and the defense as a whole, after hopping aboard the proverbial moving train last season. After all, he only spent about a month and a half in-season with the team before their year ended. And Alualu was on the Reserve/Injured list, though he has previously talked about how he was an asset. And he wants to work with the group this offseason, now back in Pittsburgh for good.

“I haven’t really talked to him after the season, but I actually came back yesterday, and I’ll be back here pretty much the rest of the time until we have to be back”, Adams said about hooking up with Alualu. “My goal was actually to train with him and Cam [Heyward] and T.J. [Watt], anyway, so I’m sure I’ll see him in the next day or so”.

Heyward is obviously the leader of that defensive line room, and has been for a number of years. Coming off yet another All-Pro season, he was the one mainstay along the defensive line in 2021 given the myriad issues that arose, but they hope to have the whole band back together.

That includes Stephon Tuitt, about whose situation Adams said he wasn’t comfortable commenting on, but simply to add that he would love to play with him. More recent communications from the organization have seemingly indicated an expectation that he will play.

Adams can be a top rotational player, a guy who can actually help those like Heyward and Alualu and Tuitt get the sort of snaps off that they have long planned for, that would keep them fresh for the late stretches of the season and into the playoffs.