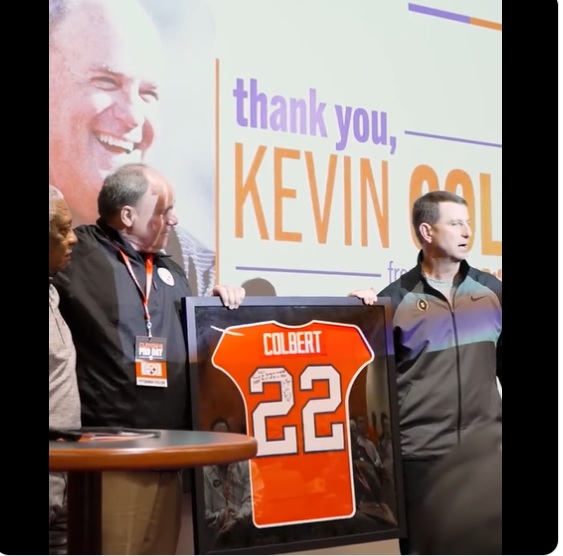 Few in the NFL have been able to spend 22 years in one place. For a GM like Kevin Colbert, he’s practically a unicorn. Or more accurately, a football legend, liked and respected by virtually everyone in the business. And not just professional football. As the Clemson Tigers showed earlier this week, the college game has a lot of love for him, too.

Colbert and head coach Mike Tomlin made a seemingly annual stop to Clemson this year for the Tigers’ Pro Day. Colbert was there to scout players but left with a gift, a framed Colbert Clemson Tigers’ jersey, presented to him by Tigers’ head coach Dabo Swinney.

Check out the video of Colbert being given the jersey and whistle, something I’ve never seen bestowed upon a GM at a college pro day.

In the video, you can hear the kind words exchanged to each other. Swinney recognized how hard it is to win in the NFL, and that the Steelers’ model of stability and success is rare to find. Colbert said the same about the program the Tigers have built. Swinney has been with Clemson since 2003 and served as the team’s head coach since 2007, the same year as the Steelers hired Tomlin. Colbert’s not one to get emotional, but you can hear him get a little choked up at the end of the video.

Clemson has been a yearly stop for Colbert and the Steelers. According to our Pro Day tracker, dating back to 2017, Colbert and Tomlin have been there every year but one, 2018. That year, the pair were at Oklahoma State’s Pro Day, eventually drafting Mason Rudolph and James Washington. Even in 2020, Colbert and Tomlin’s only Pro Day stop was at Clemson, right before the pandemic shut things down.

This is Colbert’s last Pro Day circuit as the Steelers’ GM. He’ll retire from that role after the draft, though he’s left open the possibility of him remaining with the team in an advisory role. Colbert has been the Steelers’ de facto or literal GM since 2000.

Coaching and scouting is one big fraternity. Relationships are built up and are important on both ends. NFL teams trying to gain extra info and access from college programs while college coaches are showcasing their talent in the hopes of getting their players drafted, which is great for personal success and a pretty good recruiting pitch, too. What Pittsburgh and Clemson have been able to do over the last 20 years is remarkable. And the Tigers’ gift to Colbert shows their class and respect they have for Colbert.

Frankly, Colbert is one of football’s most underrated hires of the century. Whoever replaces him will have giant shoes to fill.