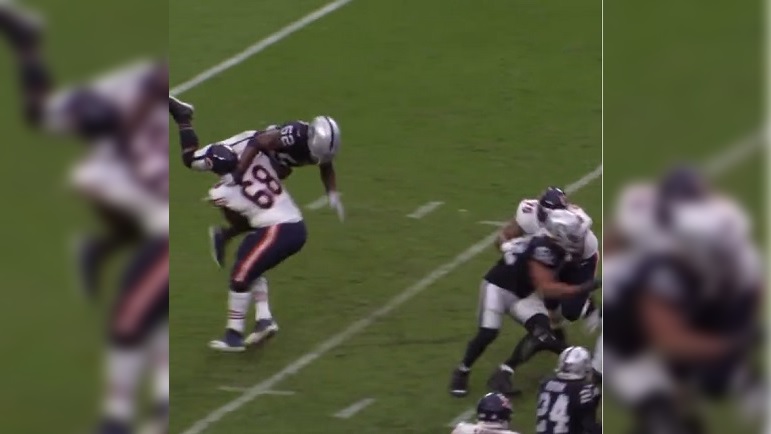 Don’t expect James Daniels to send linebackers flying every single play. But if you want one example that sums up what the Steelers are getting with him, it’s the block he had versus the Raiders last season.

Speaking to the media Thursday, Daniels spent a lot of words talking about the play. But let’s show the video first, because it’s worth a couple thousand of them.

How did Daniels pick up and throw down another grown man and NFL linebacker? He explained what happened.

“So, we were running a lot of wide zone that game,” he said via the team’s YouTube channel Thursday. “And so earlier in the game I was doing a lot of cut blocking. Of course as a linebacker, if you’re running side-to-side, of course you don’t wanna get cut. That’s very painful. And so I’m going up to block and I dipped my shoulder. It’s like I did a fake cut block. And when he saw me dip my shoulder, he expected me to cut, so therefore he jumped. And then when he jumped, I countered with my right arm and then I picked him up and dumped him.”

A moment that became instantly viral, Daniels said he didn’t even realize how good of a block it was until after the game.

“In the moment of the game, I really didn’t understand. I think someone…when we got back to the huddle, someone said great block. But then I didn’t even realize it happened until I got on the bus after the game and one of the offensive linemen was showing me Twitter. He was like, ‘dude, look at this block you had.’ And then I saw it and it was pretty exciting. The best run block I’ve had in my career easily.”

It’s even better from the end zone view.

Here’s a zoomed in view just because it’s so much fun to watch this play. That wasn’t any practice-squader he was blocking either. It was veteran Denzel Perryman.

The block was sort of a freak moment with the linebacker leaving his feet to try to avoid what he thought was a cut block. But it shows Daniels’ strength and drive and ability to plant a 200-pound something linebacker into the earth. It’s that strength and mentality the Steelers are searching to jump-start a failed running game three years running.

Daniels is an instant improvement and becomes the team’s best offensive linemen, whether that’s him playing center or either guard spot.