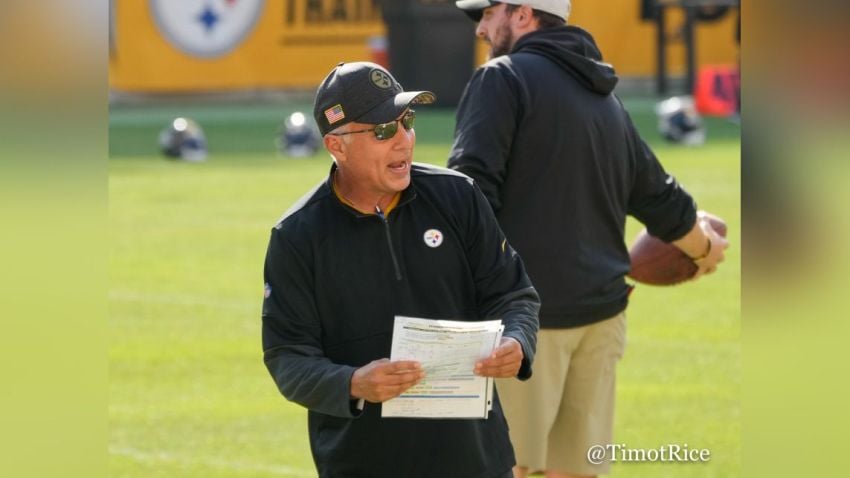 The next Pittsburgh Steelers’ franchise quarterback, whoever that man may be, will have the closest relationship with one man. It’s not Mike Tomlin or even OC Matt Canada. It’ll be QBs coach Mike Sullivan, a buttoned-up, discipline-first type of coach with plenty of NFL experience and a literal Army background, serving as an Infantry Officer before breaking into coaching.

No one knows the answer, the Steelers themselves can’t say, but let’s assume the Steelers find a quarterback in this year’s draft. A rookie lump of clay Sullivan will be tasked to mold. There’s a million points of emphasis from footwork to release to heck, working under center, something most college quarterbacks aren’t asked to do. But the foundation of everything is reading defenses and discerning coverages.

Today, we can share some insight in how Sullivan teaches it.

Earlier this month, a New York Giants’ fan account @NYGxos shared a series of clips Sullivan presumably when he still worked for the Giants. It’s unclear when this clinic is from but it appears to take place sometime between his second stint with the team, 2015 to 2017. I’ve downloaded select clips to make things more concise and clear but you should check out the entire tweet-thread he posted.

Sullivan goes through the “family” of coverage variations and shells a quarterback can see pre-snap. It’s a basic, foundational understanding and nothing too advanced but it offers insight into Sullivan’s building blocks and how he’ll begin working with a young, rookie quarterback.

Listen to Sullivan briefly go through them:

“As a quarterback is looking at a game tape and he’s starting to prepare for an opponent, these are the basics families those coverages are going to fall into.”

As Sullivan notes, he is referring to coverages in basic, relatively vanilla terms. But it’s the framework of how quarterbacks should be viewing the defense. He did reference the “post safety” in the 1-high looks. If you weren’t sure, the post-safety is the deep, free safety in the middle of the field. Think Minkah Fitzpatrick when he’s playing deep middle.

Sullivan went into a more detailed breakdown of each coverage.

Sullivan, as he often notes in this clinic, asks the quarterback to detail if the defense is disguising its coverages. If they show a two-high look initially and roll down to one-high, changing the quarterback and offense’s picture shortly before the snap, forcing everyone to adjust later than sooner.

He says teams often have a “drop safety” they’ll spin down. Someone they’d rather play closer to the line of scrimmage and someone they’d rather play in the post (deep safety). In Pittsburgh, generally Terrell Edmunds is the drop safety while Minkah Fitzpatrick plays in the post, though the Steelers rotate and mix coverages to drop Fitzpatrick down.

Importantly, Sullivan notes “boss” and bowed” linebackers. Here’s how he defines it.

Meaning, where the LBs shift and align can indicate which safety is going to drop down and where. Here’s an example of boss and bowed alignment. 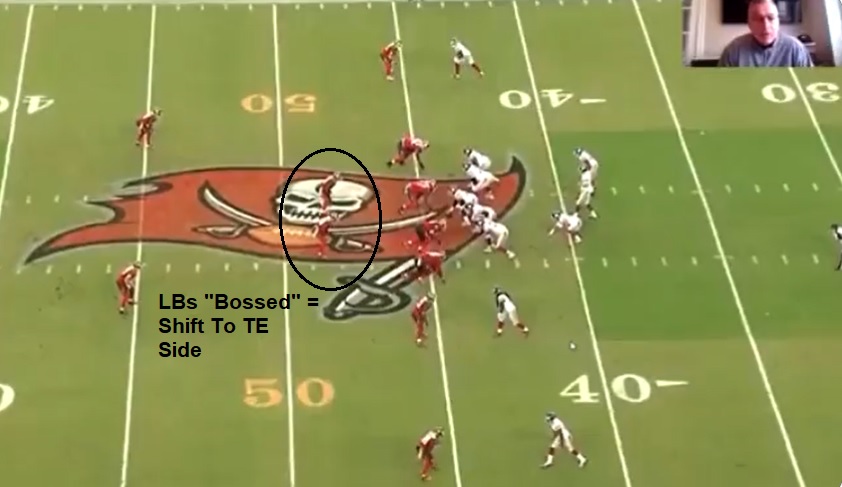 Sullivan notes slot motion will also give information not just about man or zone but more info on linebacker alignment.

Sullivan gets into the secondary pre-snap look as well.

Really interesting note from Sullivan about how he defines the passing strength for the offense/defense. In 3×1, it’s obviously to the three-receiver side. In 2×2, it’s a little less clear since it’s balanced but he defines it as the two wide receiver side, the slot (Pittsburgh calls it the F) and the Z receiver with the tight end and X wide receiver being the weakside.

“We always define the passing strength as where the nickel would align.”

Sullivan touches on the cornerback’s alignment. Off coverage, press/bail (press before bailing at the snap, zone turn with back to sideline) or lock, which is essentially zone-match coverage everything except a short/shallow in-breaking route.

He also gets into how the defense plays its one-high zone. It’s basically spot dropping versus matching. Matching means the underneath defenders carry against multiple vertical concepts (like four verts, it’s called Rip/Liz match and was created by Nick Saban in Cleveland) or if they spot drop, old-school zone where the corners “mid-line” as Sullivan calls it.

What does mid-line in one-high zone look like? We actually showed an example of that in our Joe Haden scouting report. Aligned at the bottom, check out this breakup he had against Green Bay here, mid-lining #1 and #2 vertical from a three-deep, one-high zone.

Finally, Sullivan mentions that some defenses will cut the cross with the deep-safety. Pittsburgh does this, a “Zombie call,” against Yankee concepts (post/over), two-man routes often off playaction where the CB covering the over will replace the safety in the deep middle. If you want to read more about it, click here.

Here’s Sullivan’s commentary about this type of coverage structure.

Sullivan notes who is the funnel/drop player, the linebacker or the safety. The Steelers, for example, often spin Fitzpatrick down as the underneath robber, a coverage often referred to as 1 Rat (Cover 1 Rat – Fitzpatrick being the “rat’ player). He says it’s important for the QB to note if the funnel player/dropper has eyes on the QB the whole way or if he is getting his eyes to the targets and trying to pick them up along the way.

Check out what Sullivan had to say.

The “add-on” means how quickly the linebacker in man coverage on the running back will blitz if the back stays in to pass protect. That’s what “green dog” means, blitzing if your man stays in.

Generally speaking, with one-high man pressure, the defense aligns with inside leverage because there is no one to funnel to like in non-pressure looks. But if the offense can win to the inside, they can really do damage.

Couple points he outlines here. He notes if the defense is a true zone or if they have a “man mentality,” meaning they will zone-match routes and essentially turn it into man coverage.

He also notes a defense’s blitz mentality. If they often send their nickel corner (think Pittsburgh with Mike Hilton) and if they have a tendency to rush to the strong or weakside.

Again, Sullivan harps on the disguise component of it. He notes if the team is more traditional Cover 2 or Tampa 2 with the LB gaining depth. He also notes that teams play their two-high zones differently. Quarterbacks should note how aggressive, or “nosey” as he calls it (in Pittsburgh, he should now refer to it as “nebby”) are in picking up underneath routes that could allow for throws behind them.

Some final thoughts from Sullivan.

Again, he notes if the defense tries to disguise and hide their coverages or if they play things straight up. He has the quarterback look if the defense is playing man or off, notes again the potential of the linebacker “adding-on” to the rush if the back stays in, and if the corners ever trap. That can be a zone turn (Palms) or a man turn (5 Trap).

Those were all the clips posted of Sullivan’s clinic. I couldn’t find the whole thing anywhere but if you know where it’s at, let me know. Like I said at the top, this is a very basic framework of the position. But it’s always great to get X’s and O’s insight from the Steelers’ coaches. And if Pittsburgh drafts a first-round arm, you’re going to want to revisit this post. Because Sullivan will be a crucial member of the organization in developing the Steelers’ next franchise guy.