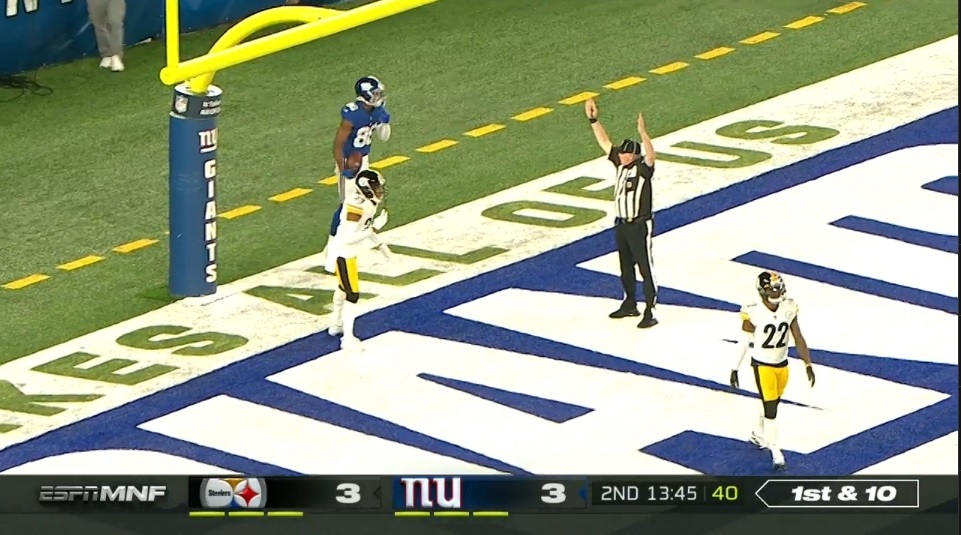 The Pittsburgh Steelers’ defense was largely its typical strong self Monday night. They harassed Daniel Jones to three sacks and a half-dozen more pressures. Saquon Barkley ran into brick wall after brick wall and they forced two key interceptions to secure and preserve the victory.

The only blemish? New York’s first touchdown of the night, a 41 yard score to WR Darius Slayton. Some will blame Minkah Fitzpatrick for seemingly vacating the middle of the field. But we’ll break down why he was in correct position and what really went wrong on the play.

Out of 13 personnel, the Giants run a post/over combination. TE Evan Engram runs a crossing pattern – the over route – with Darius Slayton running a post to the end zone. The Steelers are in a Cover 3 shell. After years of playing a traditional Cover 3 and getting burned by the over route, they’ve adjusted their scheme for a pattern matching zone defense.

When the Y runs the over, the free safety will cut the route and pick him up. He has better leverage than the cornerback, playing with outside leverage and perpetually trailing. The backside corner – after communicating to the safety to take the crosser – now becomes the free safety and deep middle defender. Terminology varies and I don’t know what Pittsburgh calls it but Ryan Clark referred to it as a “Zombie” call, also referred to in this 2015 article worth checking out.

Zombie call.. “Cut and replace” Joe has to push to the post & Minkah will cut the deep crosser since Nelson will be pushed up field on the post, vacating that area of his third.

There’s several examples of the team running this over the years. Here it is last year against the Jets.

I'll give Steelers' secondary this. They defend the vert + over route much better than the past. Safety rolls down to take over route, CB peels off to bracket #1. pic.twitter.com/3weUYNF0og

And that’s the same scheme they ran Monday. Fitzpatrick cuts Engram on the over, Haden replaces as the post safety. The issue here is two-fold. Haden doesn’t get enough depth in time to cover the post, though this is a fantastic throw by Daniel Jones. Slows up just a little bit after passing it off, eyes in the backfield, and that doesn’t allow him to rally to the post in time.

Slayton is also running a skinny post here. A receiver’s target for a skinny post is the near field goal upright. A regular post’s target point is the far upright. Had Slayton run to the far post, Haden is probably going to be in position to make the play. But because it’s to the near post, Haden has even more room to make up, and can’t get there in time. I’ll put the blame here on him but this is a difficult spot to be in.

This isn’t the first time a team has exploited this coverage check like that. In the 2017 Divisional Game against the Jaguars, Blake Bortles hit Keelan Cole for a 45 yard gain on an identical concept. 13 personnel, Y over, X post, and Haden can’t get there in time.

Those plays are frustrating to give up but it’s the inherent problem with playing defense in the NFL. If there was a perfect coverage that solved everything, every defense would run it. Coverage choices are all about what you’re willing to give up to obtain. The Steelers were killed by the crosser so they adjusted to reduce the chance of it hurting them. At the same time, it increases the odds of the QB hitting the post given the CB is in a higher-stress situation.

And sometimes you gotta give credit to the offense. This was a money throw by Daniel Jones.

You can check out Joe Judge breaking the play down at the link below. He talks about the things we discuss. Fitzpatrick dropping down and Slayton running the skinny post to the near upright making it tough for Haden to cover.

Watch the premiere episode of the Joe Judge Report!