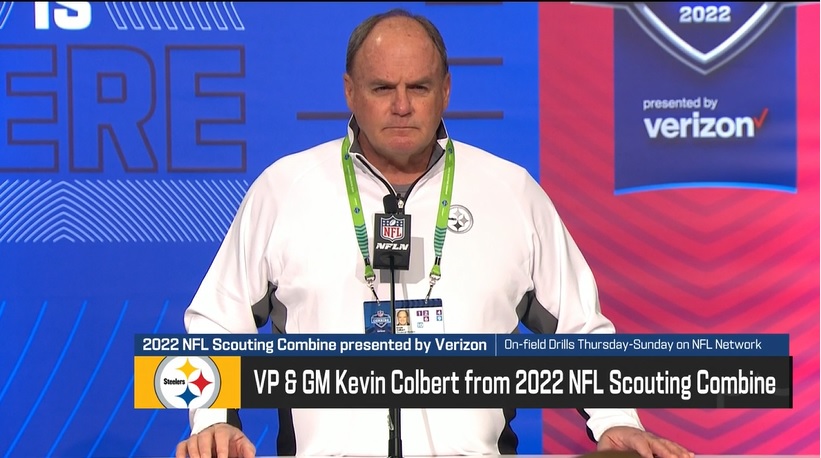 Kevin Colbert’s been running the Pittsburgh Steelers since 2000. Meaning, there isn’t much he hasn’t done. But there is one box he’s never checked. Draft an offensive tackle in the first round. Hard to believe, I know, but the last time the Steelers took an offensive tackle in round one came all the way back in 1996, selecting Jamain Stephens. Perhaps his poor NFL career has massively scarred the team.

Speaking at the NFL Combine Tuesday, Colbert said history can always be broken.

“I believe Marvel Smith was the highest we had taken,” he told reporters, including our own Jonathan Heitritter. “Again, we’re looking at every position.”

Colbert has never drafted a tackle in the first round, but he’s taken one in the second round on three occasions. As he referenced, 2000 with Marvel Smith, 2011 with Marcus Gilbert, and 2012 with Mike Adams. Smith was a slam-dunk pick whose career would’ve been even better had it not been for back injuries, while Gilbert was also a very good pick. Adams was an obvious miss, once off the Steelers’ board entirely, but he convinced the team to take a shot on him.

Since 1990, Stephens and Leon Searcy are the only two first round tackles the team has drafted. Searcy turned out to be a good tackle while Stephens was a colossal bust cut by Bill Cower at the start of the 1998 training camp.

In recent years, Colbert cited unusually strong classes as one reason why tackle hasn’t been high on their radar.

“And there’s good quality at that position in this year’s draft, for sure. There has been in recent years. The tackle position has had unusual depth. And this year is no different.”

This year’s tackle class is strong, much better than the interior offensive linemen, and headlined by some of the top prospects in the draft. Alabama’s Evan Neal, NC State’s Ikem Ekwonu, and Mississippi State’s Charles Cross are all expected to be high selections. But depth at the position also runs strong with high-level talent likely to be round into Day 2.

Colbert says the team’s focus is on finding the best talent regardless of position.

Of course, need does play a role in the team’s decision-making. And tackle will be on their list if RT Chukwuma Okorafor is not re-signed. The Steelers certainly aren’t opposed to drafting offensive linemen in the first round, doing so with Maurkice Pouncey and David DeCastro, so tackle should be an option with the 20th pick this year.