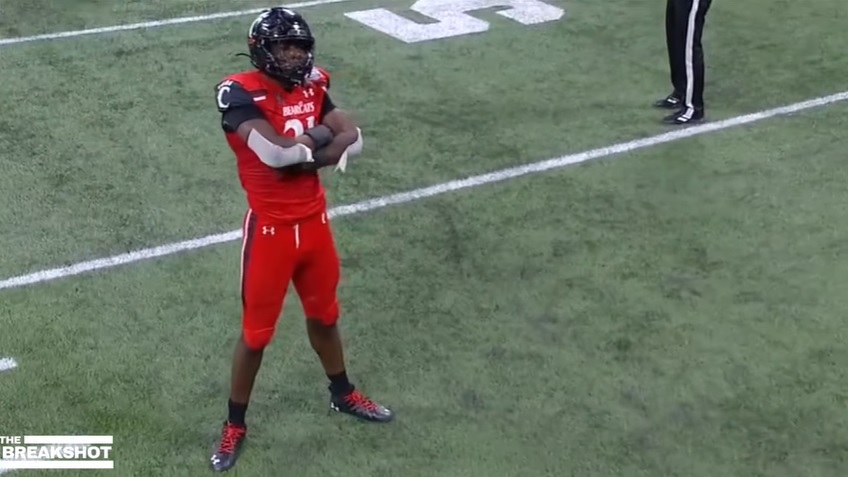 While my specialty in interviews during my time at the 2022 NFL Combine has been players I worked with personally at the University of Florida and the University of Iowa, it pays to have connections with other big schools with NFL talent. During my time with the Gators, I worked under a coaching staff that is now at Ole Miss, and alongside two former interns that are now assistants at Texas A&M and Cincinnati, respectively.

In the case of the Bearcats, I have used my connection to Coach Jeremiah Ortiz to “have an in” with some of the prospects, putting them more at-ease when I start asking them questions. I had previously interviewed Darrian Beavers and Coby Bryant at the Senior Bowl, and now I got the privilege to talk to EDGE Myjai Sanders.

JH: Hey Myjai. I worked with J.O. (Jeremiah Ortiz) back when we were at the University of Florida together. He told me to come by and say hello and ask what’s up?

MS: Hey Coach J.O. is my guy man. He has left such a big impact on me as an athlete, but even more as a person. All love and respect to J.O.

JH: You got any dirt on him that I can text him afterwards to mess with him a little bit during your time at UC?

MS: Na man, I could never do that to my guy Jay man. I don’t wanna do him dirty like that.

JH: I completely understand bro, just figured I’d try. So talk to me about that strength and conditioning department there at Cincinnati and how they have benefitted you in terms of making you a better athlete as well as a better man.

MS: Ya man. The Cincinnati coaching staff emphasized bring the juice everyday, man. J.O. was big about that (I can attest as he always said the same thing at UF). We really emphasized a competitive atmosphere where we really pushed each other to get better everyday. But we were still family; it was all love. Those coaches wanted to make us big, strong, and fit and we wanted to honor their efforts by going out there and playing the best that we could.

JH: You think that has a direct correlation to the success you guys have had on the football field during your time there?

MS: Yes sir. That family atmosphere of everybody pushing each other to be the best they can be created a culture of success at UC that I feel will be there for a long time.

JH: What would say is your best pass rush move in your arsenal at the moment?

MS: I would definitely say my side swipe/cross chop moves are my best moves.

Wow, #Cincy EDGE Myjai Sanders is returning for the Bearcats as well next season. He’s someone who I watched this week, was very impressed by him.

This team is loaded with top end talent for 2022.

JH: That’s great, man. Follow up to that, who would you say that you like to study from the NFL or model your game after?

MS: Randy Gregory, man. That guy don’t get a lot of love, but man, can he rush the quarterback.

Myjai Sanders converting speed to power, lifts the LT and then hits the QB to force an INT. Questions about a drop in numbers are there. Just find what translates. Add 20 pounds to this in a scheme made for him. pic.twitter.com/0QMVI93Xcb

JH: Dude, that’s a really good comp. Did you make that comparison due to similar body types as long, lanky guys that do a great job getting around the edge with speed or countering back inside? And with that, have you been hit up by teams due to your “lack of size” compared to a traditional edge rusher?

MS: Ya, I think we have a similar play style and physical traits. Teams really haven’t hit me up on my lack of size to be honest with you. Frankly, I don’t see why a certain size is such a big deal either if you play with good technique at setting the edge to stop the run. If you are able to read the offensive lineman pre-snap and what he’s going to do, get good hand placement and good leverage on the block, you can stand your ground and hold the point of attack, shedding off the block when you need to go make the play. Watch the tape; that’s what I do.

Final play of the thread, if there are questions about if he can defend the run, and be a true EDGE player, this play answers those questions. Absolutely blows up this fourth and one, pushes the extra lineman into the backfield.

I am a fan of Myjai Sanders. pic.twitter.com/rouTqLL708

MS: Man. This season I would say Evan Neal. He’s just one big, athletic dude. At the Senior Bowl? I would probably have to say (Darrian) Kinnard. That guy was nice.

JH: Good choices. Have you been in contact with the Pittsburgh Steelers in either a formal or informal meeting here this week?

MS: Ya I met with their DL Coach (Coach Dunbar) earlier this week. Really cool guy. We talked a lot of football and I really like the scheme that they run. I feel like I could do real well in a system like that. Having T.J. (Watt) across from me and having Cam (Heyward) in the middle? Man, we would get after people as a pass rush, I tell you.

JH: Most definitely, man. Thanks again and tell J.O. I said hello when you get back.

All-in-all a pretty good interview with laid back, yet personable guy in Myjai Sanders. While his sack production did drop off from seven to 2.5 this past season, he was often asked to play out of position, lining up inside at 4i at times rather than in a sprinters stance or and in a standup position on the edge because of what Cincinnati had to ask him to do. Despite coming in at 6’4 3/8″, 242lb, Sanders played admirably in that role, displaying physicality and flashes of speed-to-power with the upside for more.

Myjai Sanders converting speed to power, lifts the LT and then hits the QB to force an INT. Questions about a drop in numbers are there. Just find what translates. Add 20 pounds to this in a scheme made for him. pic.twitter.com/0QMVI93Xcb

Should the Pittsburgh Steelers decide to select Sanders, he would likely play the key third OLB role to sub in for either Watt or Highsmith on occasion and potentially even get all three on the field at the same time having one rush from the inside and the other two come off the edge.

What are your thoughts on Myjai Sanders and his interview? Do you think that he could potentially be a good fit in Pittsburgh? Please leave your thoughts in the comments section and thanks again for reading!