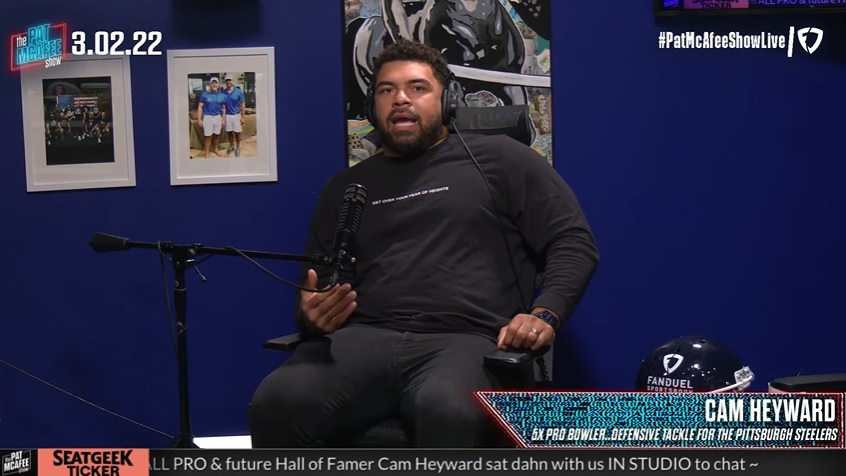 In good times and bad, if there’s one thing the Pittsburgh Steelers have been known for since the 70s, it’s steady run defense. It makes what happened in 2021 all the harder to think about. The Steelers didn’t just have a bad season stopping the run. They didn’t just have the league’s 32nd-ranked run defense. They had the worst run defense in franchise history. And Cam Heyward knows that can’t happen again.

Heyward joined The Pat McAfee Show Wednesday to discuss the Steelers getting back to their roots.

“We got to get back to stopping the run,” Heyward told the show. “That’s what we’ve always thrived in. I think we understand that if we’re going to be a good defense, we have to stop the run and then get after the pass.”

The Steelers allowed a league-worst 4.99 YPC in 2021. It was the highest mark allowed in team history, besting the previous worst by more than 0.2 yards. Offenses ran all over Pittsburgh’s battered front, allowing 200+ yard performances by the Lions, Vikings, Titans, and Ravens. In most years, the Steelers’ standard is to not allow a 100+ yard rusher. In 2021, it was about keeping teams under 200.

The sudden dropoff in run defense largely centers around injuries. Stephon Tuitt didn’t play the entire year. Tyson Alualu was lost five quarters into the season. And Devin Bush didn’t look like his previous self coming off the torn ACL. Heyward believes those players will turn things around in 2022.

It’s certainly worth noting Heyward said he expects Tuitt to return. His status remains unclear but recent comments by him and GM Kevin Colbert indicate Tutt will be part of the Steelers next season.

Heyward joked his plans to decrease his snap count went out the window when he became last man standing.

Heyward finished the year logging 955 snaps, second-most of any defensive lineman in the league. His 81.9% snap percentage was third-most among his position. Despite the heavy snap count and being well into his 30s, 2021 was arguably Heyward’s best season. But depth was weak and the line rotated a slew of inexperienced players, creating physical and mental mistakes that sunk the front seven.

But if things play out the way Heyward outlined, Tuitt and Alualu’s return, young guys growing, and the team adding some offseason help, this run defense should return to form and be top ten. It’ll need to be in an AFC North with some of the most run-minded offenses in football.