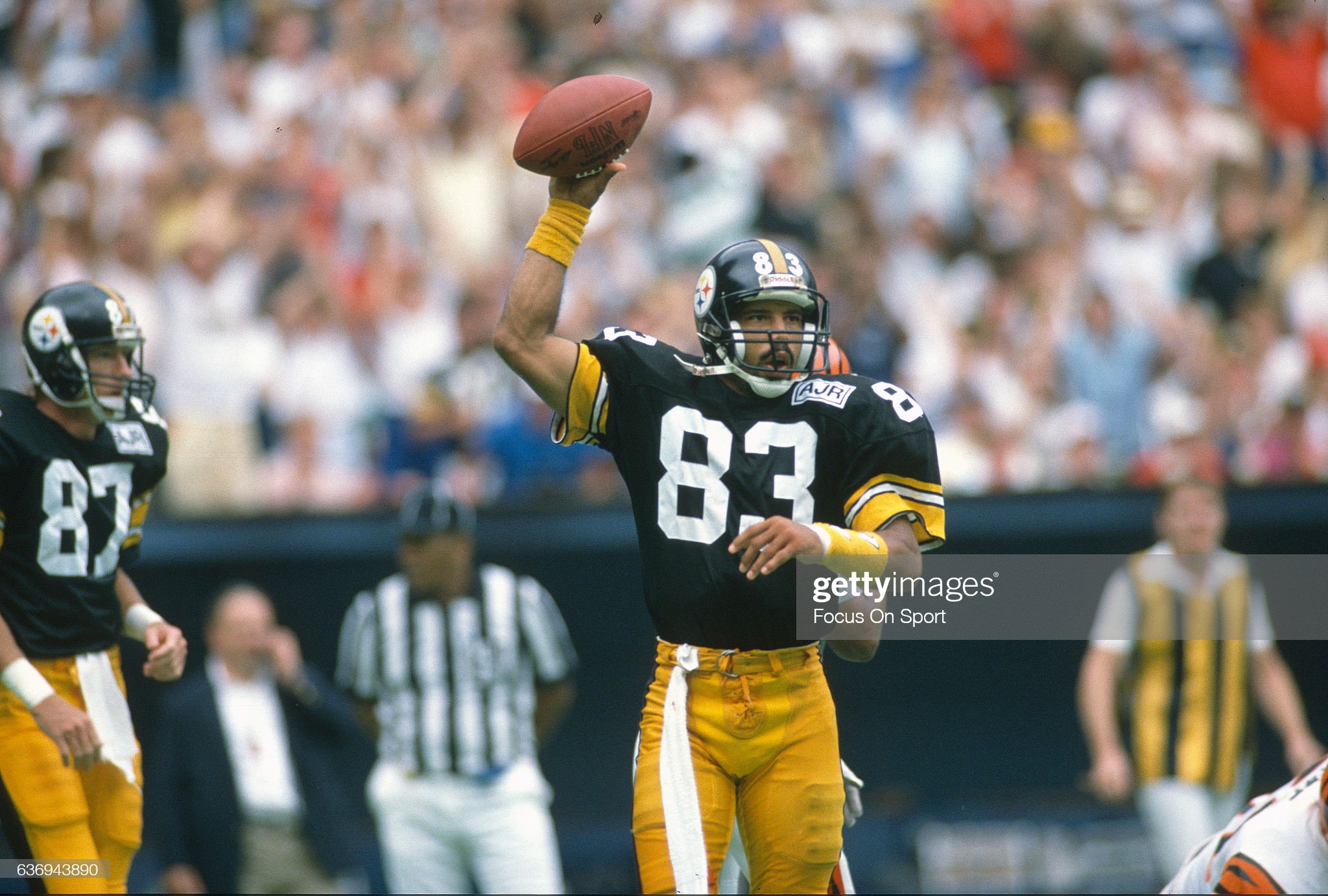 Quietly, the wide receiver position in Pittsburgh Steelers’ history has been rather impressive overall.

Though the big names such as Hall of Famers John Stallworth and Lynn Swann and potential future Hall of Famers in Hines Ward and Antonio Brown steal the headlines in Steelers’ history at the position, making a trio of selections for my All-Time Steelers Team featuring non-Hall of Famers was rather difficult.

For full transparency, I did not include Brown and Ward in this discussion because Ward has been a semifinalist for the Hall of Fame six years in a row and eventually will get in through a veterans committee. Brown on the other hand, though he has a long rap sheet off the field, while get into the Hall of Fame eventually, considering his exploits on the field.

Take those two away and it feels a bit like slim pickings, at least from the high-end talent perspective. However, I believe I was able to put together a solid trio overall.

Before we get into the discussion regarding the wide receivers on my non-Hall of Famer Steelers’ all-time team, here’s a reminder of the team outlook and the selection to date:

In the end, I settled on three prominent players in Steelers’ history.

Lipps, of course, was recently inducted into the Steelers’ Hall of Honor after an impressive eight-year career with the Steelers as a first round pick in 1984, 23rd overall, out of Southern Mississippi.

All Lipps did in his first season in the black and gold as a rookie under the tutelage of Stallworth was break the National Football League record for punt return yardage by a rookie with 656 yards. Lipps returned one punt for a touchdown and also caught 45 passes for 860 receiving yards and nine touchdowns on his way to being named the NFL’s Offensive Rookie of the Year at season’s end, earning a Pro Bowl nod in the process, as well.

Sunday against the Cardinals, WR Diontae Johnson became the first #Steelers’ rookie with a punt return for a TD and TD reception in the same game since Louis Lipps at New Orleans on Nov. 19, 1984. Here are those two TDs by Lipps. Some color commentary by O.J. Simpson. pic.twitter.com/zvhcAT69TH

If the 1984 season was a good one for Lipps, the 1985 season was a great one as the second-year receiver finished the year with a career-best 59 catches for 1,134 yards and 12 touchdowns, adding another 437 punt return yards and two scores, earning Second Team All-Pro honors for the second straight seasons and a trip to the Pro Bowl once again.

Things quieted from there for Lipps as he dealt with injuries in 1986 and 1987, playing just 17 games total. The standout receiver bounced back in a big way in 1988 and 1989, recording 973 and 944 receiving yards in back-to-back seasons on 50 catches each, scoring five touchdowns through the air in both seasons.

Lipps is still 5th all-time. This was also the last TD of his career. pic.twitter.com/lRB2CvCoZe

That would be the final peak of Lipps’ career as he fell off slightly in 1990 and 1991, combining for just 1,353 yards and five touchdowns on 105 catches over two seasons before leaving the Steelers ahead of the 1992 season for a stint with his hometown New Orleans Saints. In New Orleans, Lipps caught just one pass in two games before retiring as a Steeler in 1993, finishing his career third all-time in Steelers’ receiving history. He currently sits fifth all-time now.

Lipps put up 358 receptions over those eight years in Pittsburgh for 6,018 yards and 39 touchdowns, numbers that are more impressive when you put them in context, considering his quarterbacks were Mark Malone, Bubby Brister, and Neil O’Donnell, especially in a run-first era. He also returned 107 punts for 1,212 yards for a very respectable 11.3-yard average, with three touchdowns.

Here is Bubby Brister to Louis Lipps for 79 yards and a TD on December 24, 1989 against the Buccaneers. #Steelers #HereWeGo pic.twitter.com/ntfchpAW7O

Along with Lipps, I decided to grab Buddy Dial for my all-time Steelers’ team using non-Hall of Famers.

For some reading that name, the immediate response is likely “who?” Let me explain.

Dial played for the Steelers from 1959 to 1963 before being erroneously traded to the Dallas Cowboys for the rights to a draft pick that the Steelers never were able to sign. That player? Defensive tackle Scott Appleton, who went on to play for the Houston Oilers, San Diego Chargers, OAKLAND Raiders, and New Orleans Saints.

Imagine that: A second-round pick being waived before ever playing a game. Unheard of!

Once he was waived, the Steelers claimed him and paired him with quarterback Bobby Layne, allowing the two to light up the league. In 1960, Dial hauled in 40 receptions for 972 yards and nine touchdowns, all this while playing in the early 60s in a run-extremely-heavy NFL.

Following an impressive second season, Dial followed that up with a terrific 1961 season, finishing with 53 catches for 1,047 yards and 12 touchdowns, again, all recorded in an era where the football wasn’t thrown as much as it is today. The 1962 season saw Dial take a slight step back with 50 catches for 981 yards and six touchdowns, but the star receiver came all the way back in 1963 and recorded his best season ever, finishing with 60 receptions for 1,295 yards and nine touchdowns in what would ultimately be his final season in Pittsburgh.

After the 1963 season, which saw Dial earn his second of two Pro Bowl nods, the Steelers shipped him to Dallas for the rights to Appleton, where Dial never even came close to achieving the highs he did in Pittsburgh. In five seasons with the Steelers, Dial record 219 catches for 4,723 yards and an absurd 42 touchdowns. That was good enough to make him the second-leading receiver in Steelers’ history behind Elbie Nickel until Swann and Stallworth came long, and later guys like Brown, Ward, Lipps, and Heath Miller. Currently, Dial sits eighth all-time on the Steelers’ receiving leaders list.

Finally, there was no real debate that Santonio Holmes was going to make this list.

Of course, Holmes is outside the top 10 in Steelers’ history in receiving yards at No. 13 overall and his No. 16 overall in catches, but Holmes made arguably the greatest play in NFL history and was a dynamic playmaker when wearing the black and gold before being shipped out of town due to off-the-field issues.

A first-round pick out of Ohio State in 2006 at No. 25 overall by the Steelers (after a trade up from No. 31 overall), Holmes became just the second wide receiver under Kevin Colbert to be drafted in the first round. Right away, the Ohio State product delivered.

As a rookie, Holmes eventually worked his way into the starting lineup and finished the season with 49 receptions for 824 yards and two touchdowns, though he did struggle as a punt returner. Holmes was named the Diet Pepsi Rookie of the Week in Week 6 against the Kansas City Chiefs his rookie season.

No shortage of big plays in crunchtime when it’s @ToneTime10.

Taking on a larger role in Year 2, Holmes hauled in 52 passes for 942 yards and an impressive 18.1 yards per catch to go along with eight touchdowns, leading the Steelers in receptions and touchdowns on the year. The 2008 season saw Holmes put up another impressive season in Pittsburgh as he finished with 55 receptions for 821 yards and five touchdowns, though he was ultimately benched by Mike Tomlin after being arrested for drug possession.

Holmes put it all together that year in the playoffs though, closing it out in Super Bowl XLIII as he helped secure the Steelers’ NFL-record sixth Super Bowl win after catching a six-yard touchdown pass from Ben Roethlisberger with 35 seconds left in regulation. Holmes caught nine passes for 131 yards and a touchdown, including four receptions for 73 yards on their final game-winning drive. He was named Super Bowl MVP, becoming the sixth wide receiver to win the award, and also was the third Pittsburgh receiver to win the award, following Lynn Swann in Super Bowl X and Hines Ward in Super Bowl XL.

Ben Roethlisberger to Santonio Holmes in Super Bowl XLIII between the Cardinals and the Steelers is starting to really feel like a long time ago now. #Steelers #NFL pic.twitter.com/doU1B6dyiS

Fresh off the Super Bowl MVP, Holmes then put it all together in 2009, recording 79 receptions for 1,248 yards and five touchdowns before ultimately being dealt to the New York Jets, due to additional off-field issues, for a fifth-round draft pick in the 2010 NFL Draft. The Steelers eventually traded the pick to the Arizona Cardinals in exchange for a sixth-round pick, which they used to draft Antonio Brown, and re-acquired Bryant McFadden.

Holmes never cracked 1,000 yards receiving again in his career in four years with the Jets and one with the Chicago Bears, catching passes from the likes of Mark Sanchez, Tim Tebow, and Geno Smith in New York, and Jay Cutler in Chicago.

Of the three that I selected, Holmes is the lone one not in the Steelers’ Hall of Honor, though he should eventually get there, considering the Super Bowl MVP and historic catch, regardless of off-field troubles.