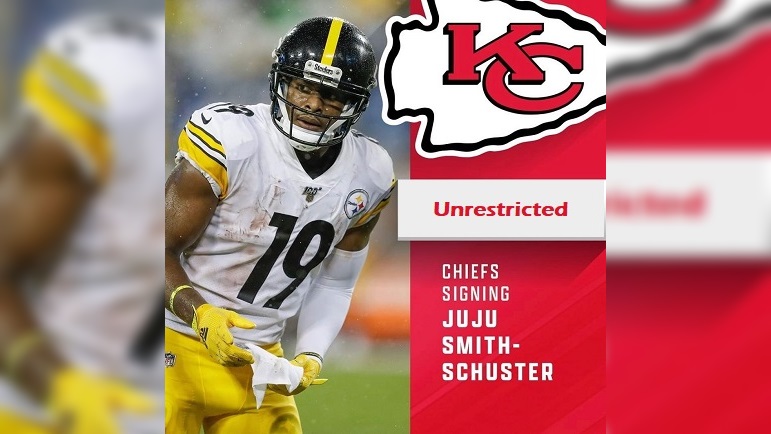 Reasoning: While there are unconfirmed reports that the Steelers were not interested in bringing back Smith-Schuster (in spite of what they have said this offseason), the sixth-year veteran wide receiver ultimately signed a one-year contract with the Kansas City Chiefs, who pursued him a year ago in free agency.

JuJu Smith-Schuster recorded 169 receptions for 2343 yards and 14 touchdowns during his first two seasons in the NFL, through 30 games played. Over the next three years (in 33 games played), he caught 154 passes for 1512 yards and 12 touchdowns.

Injuries have unfortunately been a major part of the past three seasons, missing most of last year due to a shoulder injury, and playing injured through most of the 2019 season, which included a significant knee injury late in the year that caused him to miss four games, and which continued to bother him in 2020.

His market tanked because of his lack of production, which was caused by a variety of factors, including how his usage evolved in an offense behind an offensive line that couldn’t pass protect and a quarterback who couldn’t move in the pocket, necessitating a quick-release passing game. He may lead the league in third-down conversions on passes thrown short of the sticks.

Smith-Schuster hit free agency last year, but he decided to return to Pittsburgh for Ben Roethlisberger’s final season on a one-year, $8 million deal, even though he received slightly better offers from objectively better teams.

We really don’t know whether or not the Steelers ever tried to re-sign him this year, but what we can accurately surmise is that they wouldn’t have given him the contract the Chiefs did, which is heavy on incentives.

His departure, along with James Washington and Ray-Ray McCloud, leaves the Steelers very thin at wide receiver, something they will have to seriously address over the remainder of the offseason, whether via free agency, the draft, or trade—if not all three.