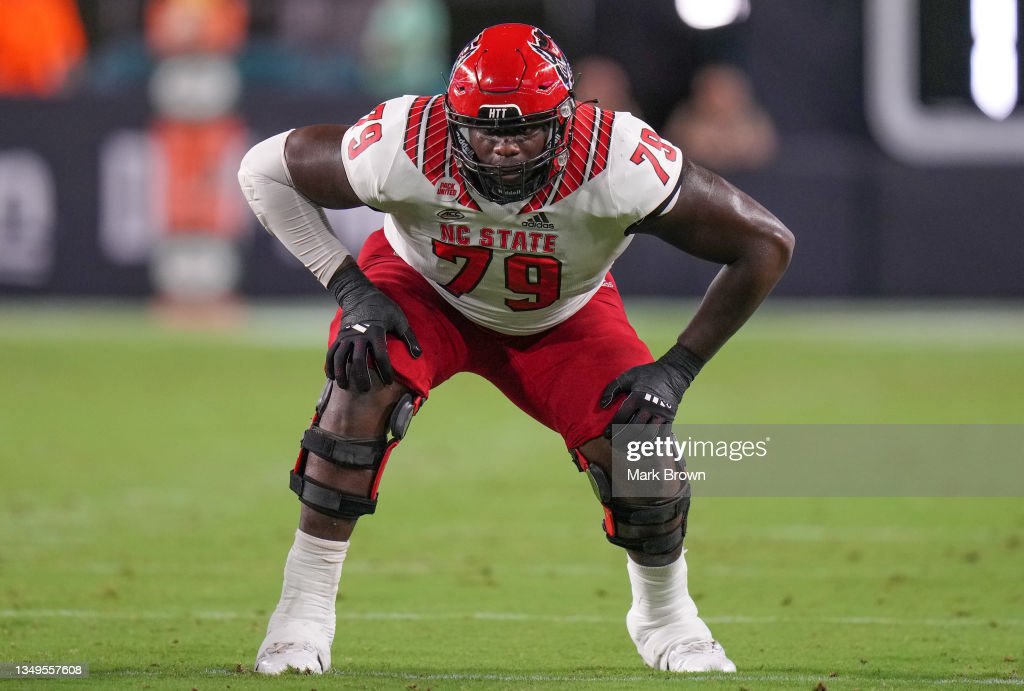 Close the book on Day Two of the 2022 NFL Combine. Friday saw the rest of the offense, offensive line and running backs, go through drills and testing. A reminder to follow our daily tracker that is now completely filled out from the first two days.

Let’s talk about what went down at Indy with the rest of the offense.

– Thought Boston College’s Zion Johnson was one of the winners of the day. He’s enjoyed a great pre-draft process. In terms of testing, he was at or near the top in virtually every category. His day was highlighted by 32 reps on the bar, a 32 inch vert, and 7.38 three-cone.

With his size, tape, Senior Bowl week, and testing, he should be squarely on Steelers' radar at #20.

Johnson is part of an exclusive and athletic offensive lineman club. That 4.46 short-shuttle correlates well to NFL success, as pointed out by Josh Norris.

On the field, Johnson looked fluid and quick in drills. He has a big lower half with good bend in his stance and changing directions when asked to pull. As I noted in the tweet, Johnson has checked every box from size to Senior Bowl performance to versatility to testing. In a not-so-deep interior offensive line class, he should be a first-round pick, even knowing guards and centers get pushed down a bit. If Pittsburgh doesn’t go QB at #20, they should strongly consider Zion Johnson.

– Johnson’s case to go at #20 was helped by Texas A&M Kenyon Green’s difficult day. He struggled as much as Johnson shined. Green’s testing was below average to poor. His ten-split was serviceable (1.8, same as Johnson’s) but he jumped just 26 inches in the vertical, 8’6″ in the broad, and an ugly 5.12 short shuttle.

But those are just tests. In drills, he especially struggled and seemed to screw up the drills. In the redirect/kickslide drill, he messed up twice, the first time forgetting to redirect and slipping on the second attempt, getting taken out of the drill and forced to do it last, which he finally accomplished. It’s not like he was one of the first guys to go of his group so making mistakes like this is just not acceptable. Today’s performance honestly hurt his stock. At least a little bit.

– Good day for the top tackles who worked out. NC State’s Ikem Eknowu and Mississippi State’s Charles Cross carry their weight well. Both are long and fluid and tested well. Both ran in the 4.9’s with low to mid 1.7 ten-splits. Both along with Alabama OT Evan Neal should be the first three tackles taken in this class.

– Kentucky center Luke Fortner isn’t a sexy pick but he’s going to be a good center for a long-time. His size is underrated at 604, 307 with 33 inch arms, a rare build for a true center, not a guard convert. He was just solid in everything he did, especially in drills. Looked comfortable and smooth in the weave drill where some guys struggle and strain.

– Oklahoma interior lineman Marquis Hayes is best in a booth. Heels clicked in the weave drill and he looked tight trying to pull. He’s best in a base-block scheme where he can get downhill and engulf defenders with his size, length, and aggressive demeanor.

– Washington State OT Abraham Lucas is a real sleeper at tackle. Enjoyed a good Senior Bowl and carried that over to the Combine. Athletic with an official 4.92 40 and whopping 4.4 short shuttle, an insanely good time. Lucas has a big and thick lower half and carried his athleticism over to drills. For being over 6’6, he’s not tight-hipped and is able to sink and bend. He’ll be driven down in a pretty talented and deep tackle class but he should be a Day Two pick.

– Tulsa’s Tyler Smith is aggressive and looks the part but didn’t have a great showing in drills, looking tall and moving too slowly through. Highly penalized last year, he may be a poor man’s Trevor Penning. Penning’s testing was significantly better.

– Finally, UT-Chattanooga’s Cole Strange is a guy I should be looking at more closely. Sort of dismissed him at the Senior Bowl as your typical try-hard center who lacks the physical tools. But Strange has great length with 33 inch arms who shows snap out of his stance. And he is a competitive, aggressive dude who should be able to fit well in a zone scheme.

– Since we discuss it being such an important number, the best ten split? San Diego State’s Zach Thomas at 1.67 (unofficial). The worst? Arkansas’ Myron Cunningham at 1.88 (unofficial).

Those marks are as much as 0.1 quicker than the unofficial times. Vert strange to see.

– With that rant over, the backs overall looked good. Iowa State’s Breece Hall is considered the top RB in this class and looked every bit of it during his drills.

– Overall, Georgia’s James Cook looked really smooth. Every drill felt effortless and he caught the ball well. His 67 career catches and six career scores made him comfortable in Indy. Cook did have an uncomfortable moment with Steelers’ scout Mark Gorscak, who whistled him early on his second 40-run. Cook wasn’t happy with it and his body language made that fact pretty clear.

– To be fair, most of the backs caught the ball well. That’s the era of the pass-happy game. Most of these guys are asked to do it. Florida’s Dameon Pierce is one of the few who didn’t do much of it in school and I’ve seen him fight the ball a bit at the Senior Bowl and yesterday in drills. My comp to him remains a Damien Harris type of bruiser. As a runner and competitor, he’s fun to watch. He’s just a little bit limited.

– Kenneth Walker turned in a sub 4.4 40, something most didn’t expect, but he didn’t look great in drills. Head down in the Duce Staley Drill over the bags and didn’t look as comfortable in his routes, especially when asked to change directions.

–  Obviously, running back won’t be of big need for the Steelers. But some Day Three guys worth keeping in mind. Baylor’s Abram Smith (who did not workout yesterday), South Dakota State’s Pierre Strong, Georgia’s Zamir White, and despite the slow 40 time, I still think there’s a home for WVU’s Leddie Brown.