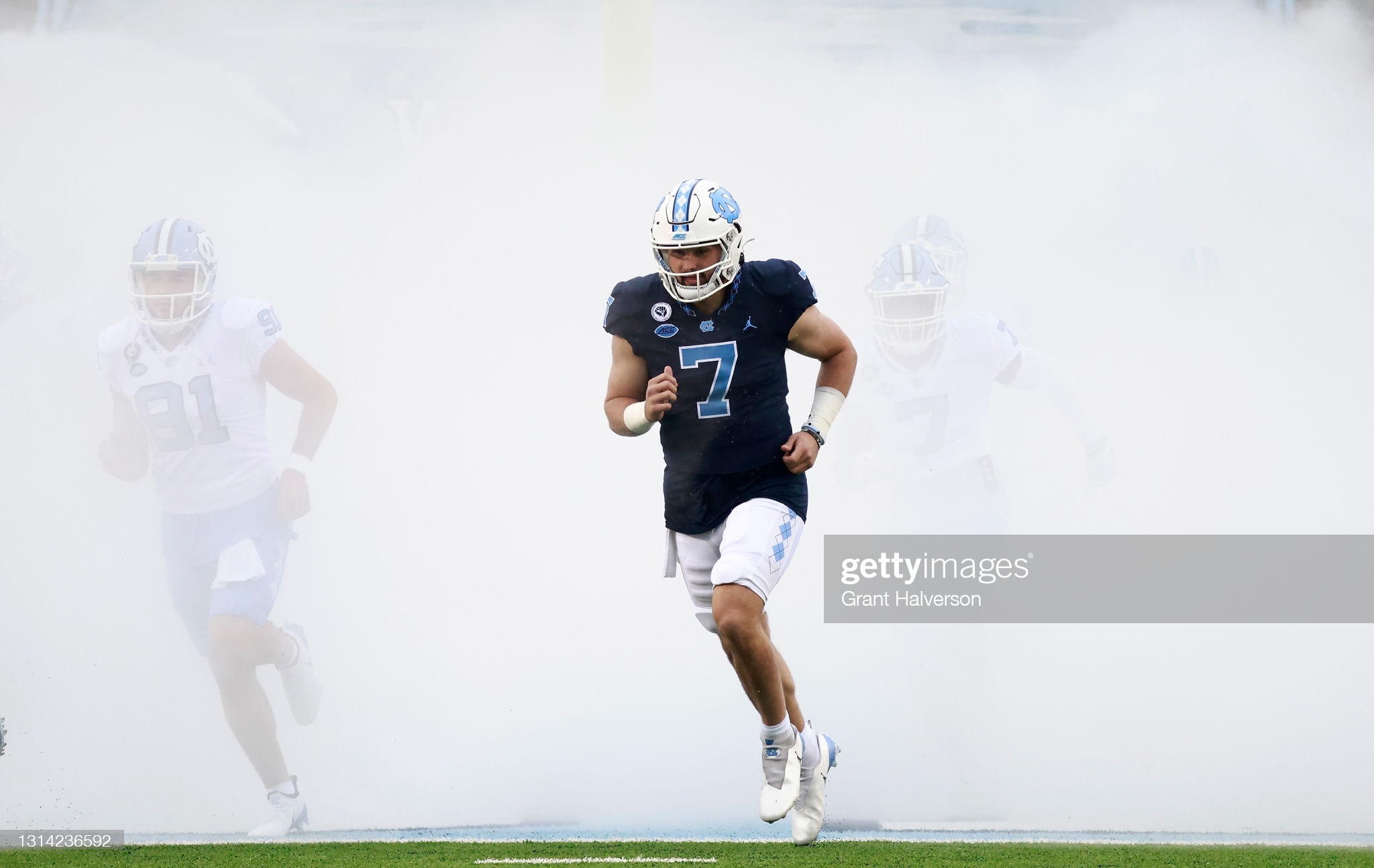 The idea of the Pittsburgh Steelers trading up for a quarterback is likely to be a common theme of mock drafts over the next ten weeks. But who the Steelers moved up for in NFL.com Chad Reuter’s three-round mock is a bit of a surprise.

In his latest edition, he has the team making a Devin Bush-esque move going from #20 to #10 in a trade with the New York Jets to select…North Carolina quarterback Sam Howell. Here’s what Reuter writes in evaluating the trade and the pick.

“Steelers general manager Kevin Colbert is stepping down after the draft. I suspect he’ll make his best effort to acquire the team’s future starting QB before he departs. Trading up for Howell would cost the Steelers their 2023 first-round pick and one of their third-rounders this year. Howell’s production was down in 2021 but he showed the same leadership, arm strength and gumption during the Senior Bowl that was on display over the past three years at North Carolina.”

The idea of Colbert going after a quarterback before he exits stage right makes some level of sense. But Colbert’s focus will be on doing what’s best for the team and in some respects, there’s value in allowing his heir to make that long-term call. Bottom line, if there’s a quarterback worth taking, they’ll take one. If not, they won’t.

Several mocks have had the team trading up for quarterbacks but involving names like Liberty’s Malik Willis, who is perceived to have more talent and higher upside than arguably any other quarterback in this class. Howell is in the mix in the jumble of quarterbacks jockeying for draft position, but he’s largely seen as a late Day 1 or early Day 2 pick.

He’s coming off a down 2021 season, in part due to losing key weapons in RBs Michael Carter and Javonte Williams along with WRs Dyami Brown and Dazz Newsome. Still, on a baseline level, Howell has the arm, mobility, and toughness the Steelers are looking for. Howell is the third quarterback taken in this mock behind Willis at #3 and Kenny Pickett at #9, so this mock stays true to usual form in its QB-aggressive ways.

Reuter’s mock doesn’t specify all the trade details, but he has the Jets picking up the Steelers’ original, third-round pick in this mock, so that appears to be part of the trade.

The deal leaves Pittsburgh with two other draft picks in this mock. In the second round at pick #52, the team gives Howell protection with Kentucky OL Darian Kinnard. There are no explanations for second or third round picks, but Kinnard is a big man who slimmed down a bit for the Senior Bowl, dropping his weight from a listed 345 pounds to 324 at Mobile. Part of the “Big Blue Wall” in school, he played tackle for the Wildcats while also logging time at guard during Senior Bowl week. He’s a plus run-blocker who would fit well on the right side of the Steelers’ line, one where RG Trai Turner and RT Chukwuma Okorafor are pending free agents.

Reuter’s mock draft projects out compensatory picks, and he has the Steelers landing a third-rounder at pick #99. It’s more likely they receive only a fourth-round pick for Bud Dupree, but regardless, he has the team selecting Cincinnati safety Bryan Cook at that selection.

A one-year starter for the Bearcats, Cook broke out for 96 tackles, nine pass deflections, and two interceptions in 2021. He’s part of a talented Cincinnati secondary with other quality prospects like CB Sauce Gardner and Coby Bryant. Cook is listed at a healthy 6’1″, 210 pounds, and would presumably replace Terrell Edmunds, whose rookie contract is expiring after the Steelers declined his fifth-year option last offseason.

Overall, Reuter’s mock draft checks the boxes of what the Steelers’ need, quarterback, O-line, and safety, though the particular names and a trade to go up for Howell are sure to wrinkle some noses. The Steelers also are unlikely to come away with a third-round compensatory picks, though it’d be great news if that turns out to be true.

Again, here is a link to the entire draft. Alabama OT Evan Neal went #1 overall to the Jacksonville Jaguars.