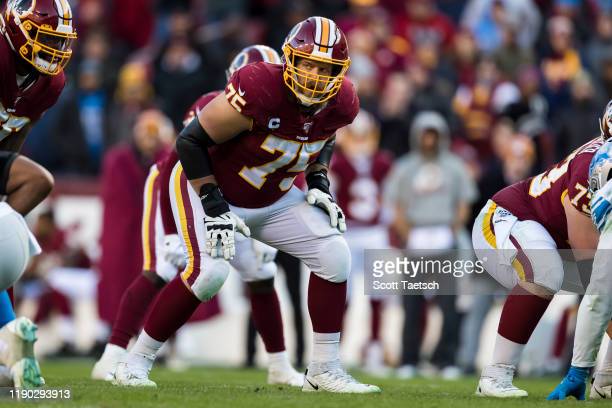 It’s no big secret that the Pittsburgh Steelers have several holes to fill on their roster, be it via the draft or in free agency. For the first time in what seems like an eternity, the team actually has some decent spending money for players on the open market, and a few simple cuts like inside linebacker Joe Schobert and tackle Zach Banner could push that number higher. As we await the big game this Sunday, the minds of any team not named the Los Angeles Rams or the Cincinnati Bengals are undoubtedly already geared towards the inauguration of free agency on March 14.

One player the Steelers should have a keen eye on is Washington Commanders’ multi-time Pro Bowl guard Brandon Scherff. The Steelers’ offensive line was arguably the weakest link on an offensive unit that’s certainly not lacking at the skill positions. However, when watching stud rookie, and Pro Bowler himself, running back Najee Harris run into brick walls on each handoff, it’s become very apparent that this unit needs sufficiently upgraded.

A seven-year NFL veteran, Scherff has played the last two seasons on the franchise tag, and a third from Washington is highly unlikely, making him an unrestricted free agent for the first time in his career. The former top-10 draft choice from the Iowa Hawkeye stands 6’5″ and weighs 315 pounds.

Durability is a slight concern with Scherff, having played in just 11 games in 2021, and not a full season since 2016. However, when on the field, the results have been great. Last season, he didn’t give up a sack, and only committed six penalties. What should be particularly appealing to Steelers’ brass is his devastation at the point of attack as a run blocker. He’s on a short list league wide as perhaps the best run blocking guard, and will be paid as such by his next team, whether it’s in the Steel City or elsewhere.

He already was the highest paid guard in the league in 2021, in terms of per-year value, at $18.036 million. Odds are very good that his agent will be pushing to re-set the market for guards, and Scherff will likely surpass that of the KC Chiefs’ Joe Thuney and the Cleveland Browns’ Joel Bitonio. Their annual values are $16 million on their respective deals.

PFF projects Scherff’s next deal to be approximately a three-year contract worth roughly $17M per season. With uncertainty at the quarterback position, and a likelihood it very well could be a rookie passer under center, the emphasis on the offensive line cannot be understated. Although rookie Dan Moore showed promise at left tackle, the rest of the offensive line left a lot to be desired, especially the play of fellow rookie, center Kendrick Green.

It remains to be seen what a full offseason in an NFL weight room will do for Green, but adding some veteran stability to the line will do wonders. Think back to Ben Roethlisberger’s early year, when pass attempts rarely reached the 20’s, with a heavy emphasis on the ground game and stout defense. It’s a recipe for success when ushering in a new quarterback, and with the Steelers having one of the worst offensive lines in 2021, Scherff should be a no-brainer target of theirs when free agency arrives.