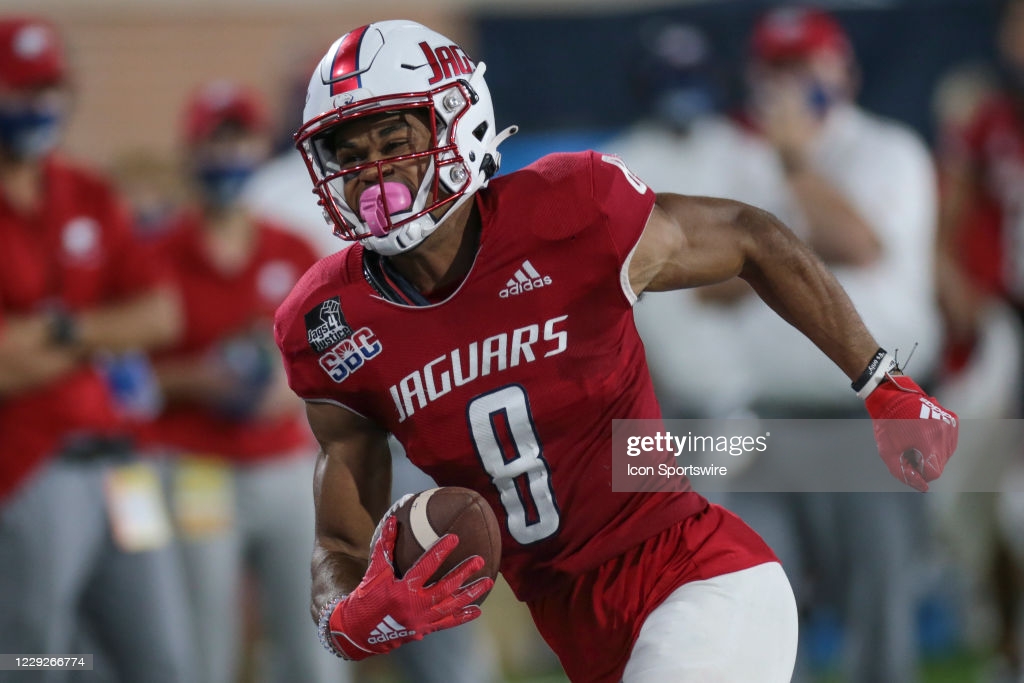 The former 2-star wide receiver that turned offers from the likes of Michigan State and Vanderbilt to stay home in Mobile, Alabama, and play for Southern Alabama is…well… staying home one last time in front of his hometown crowd while he suits up for the 2022 Senior Bowl. Jalen Tolbert, a 6’1″ 195-pound receiver, played his high school ball a mere eight miles away from Southern Alabama’s Hancock Whitney Stadium at the local McGill-Toolen High School.

The reason for Tolbert sticking close to home? He wanted to be loyal and be an example for his local community.

“A lot of these young guys around here look up to me,” Tolbert said. “And you know, I want to be the example for them to show that you can make it out of here, make it to the Senior Bowl, be able to get drafted. You know, whatever your dream aspirations may be. You know, I wanted to be that example for them. I was excited to stay here and work with Coach [Major] Applewhite, Coach Wommack, Coach Smitty [Smith] and you know, continue to help change the culture around here and create the way for those young guys.”

Tolbert may not have been able to fully build a winning culture with the young Southern Alabama football program during his time there, but he’s hoping he set a foundation for the future. The redshirt senior receiver put together back-to-back 1,000+ yard, eight-touchdown seasons during his time in Mobile and is excited to play there one last time before likely becoming only the fourth player drafted in school history.

Those 1,000-yard seasons didn’t come easy for Tolbert. It’s something he really had to work for and improve his game to get to. He knew to get the real attention of NFL teams he had to do more than just be a static guy on the outside for Jaguars. A box was not something that Tolbert wanted to paint himself into at the next level. He thinks he can play any position inside or out.

Tolbert didn’t move around a ton during his first day of practice at the Senior Bowl, mostly lining up on the outside. He did take advantage of his reps though during the American team’s first practice making multiple catches deep downfield.

Jalen Tolbert in a nutshell here

#SouthAlabama WR Jalen Tolbert entered the week as the top WR here in Mobile. He didn’t disappoint in the first practice.

Geography is not the only reason Tolbert feels at home in Mobile. He feels there’s a ton of guys at the Senior Bowl just like him who were overlooked and finally get a chance to prove themselves.

“I love being an underdog myself,” Tolbert said. “So, I know these guys are just like me and a lot of people look at look over us because of the level of competition, but that’s something that, you know, you got the opportunity to come out here and show that you’re with the best of the best.”

Tolbert doesn’t shy away from that competition either. He knows to when you’re trying to be the best, you got to beat the best. When asked about who he’s most excited to play against Saturday, he wasted no time in his answer.

We’ll see if Tolbert can have a successful curtain call in front his hometown fans Saturday.