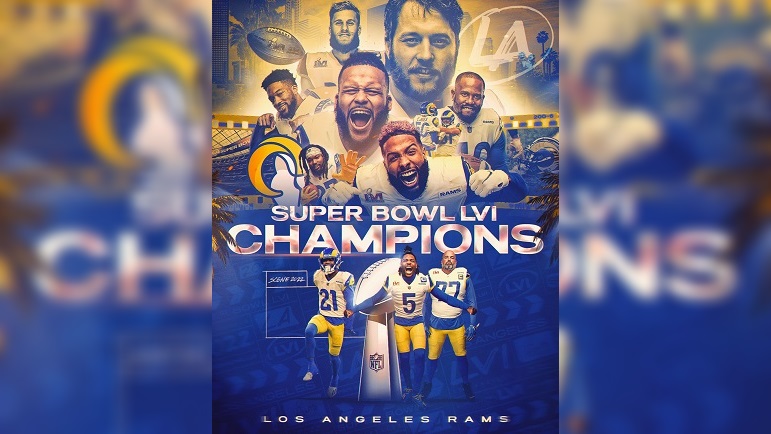 The Los Angeles Rams are now World Champions of the 2021 NFL season as they beat the Cincinnati Bengals 23-20 Sunday night in Super Bowl LVI at SoFi Stadium in Inglewood, CA.

The Rams, who entered Sunday night as 4.5-point favorites to the Bengals, overcame a 20-13 Cincinnati lead in the third quarter on their way to winning a second championship for the organization. Rams’ wide receiver Cooper Kupp was named Super Bowl LVI MVP after registering eight catches for 92 yards and two touchdowns in the contest.

Veteran Rams quarterback Matthew Stafford drove the offense down the field for the game-winning score in the fourth quarter, which came with 1:25 left in regulation time. His 1-yard touchdown pass to Kupp capped a 15-play, 79-yard drive that took 4:48 off the fourth quarter clock.

Stafford finished the game with 26 completions on 40 total attempts for 283 yards with three touchdowns and two interceptions. Two of his touchdown passes went to Kupp and the other went to wide receiver Odell Beckham Jr. in the first quarter to put the Rams ahead 7-0.

The Rams’ defense also played a huge part in the team’s Sunday night Super Bowl win as the unit harassed Bengals quarterback Joe Burrow quite a bit in the second half with pressure. Burrow, who finished Sunday’s game having completed 22 of his 33 total pass attempts for 263 yards with one touchdown and interceptions, was sacked seven times by the Rams’ defense.

Leading the way for the Rams defense Sunday night was defensive tackle Aaron Donald and edge rusher Von Miller as both had two sacks apiece. Donald had four total tackles in the game with two resulting in lost yardage. He also forced a fourth down incompletion late in the fourth quarter to essentially end the game. Rams cornerback Darious Williams led his team in total tackles Sunday night with eight.

After the Rams took a 7-0 lead with 6:22 left in the first quarter, the Bengals eventually got on the scoreboard later in the frame with an Evan McPherson field goal. The Rams next scored their second touchdown of the game with 12:51 left in the first half.

The Rams game0wining score started at their own 21-yard-line with 6:13 left in the fourth quarter. Stafford connected with Kupp four times on that drive and the wide receiver also converted a fourth-and-1 with his legs on an end-around run as well.

After the Rams scored their go-ahead touchdown, the Bengals looked as if they might at least get into field goal range on their ensuing drive. That’s when Donald made two huge plays for the Rams’ defense with one being a run tackle for a loss on a third-and-1 play with the ensuing play being a pressure on Burrow that forced the Bengals quarterback to throw the football incomplete in desperation on fourh-and-1.

The Rams are now Super Bowl champions for just the second time ever. Their previous Lombardi trophy win came in Super Bowl XXXIV in January of 2000 against the Tennessee Titans at the Georgia Dome in Atlanta. The Rams finished the 2021 regular season with a 12-5 record. They then proceeded to beat the Arizona Cardinals in the Wild Card Round, the Tampa Bay Buccaneers in the Divisional Round, and the San Francisco 49ers in the NFC Championship Game to advance to Super Bowl LVI.