After discussing mobility a few days ago, I wanted to give visual context to the type of passing yardage some draft eligible quarterbacks provided for their teams in the 2021 college football season. Arm strength and pushing the ball downfield were the next factors I wanted to look at, so let’s use air yards tracked by Sports Info Solutions and I’ll include some takeaways from the recent college all-star games this week along with completed draft player profiles from the Steelers Depot draft team (linked names): 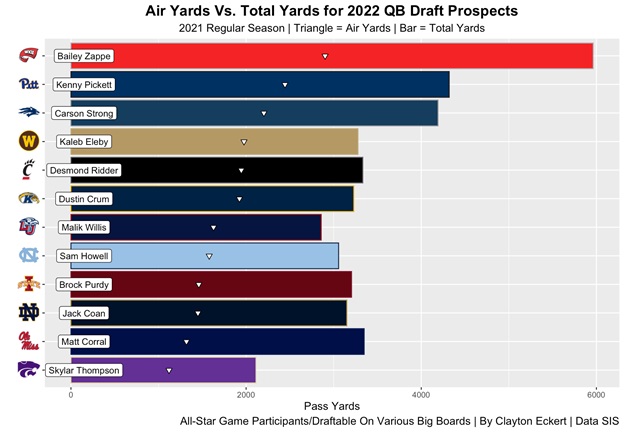 With the graph sorted by air yards, we get a ranking and an interesting view of which quarterbacks threw downfield more and which benefited from yards after catch from their playmakers.

Western Kentucky quarterback Bailey Zappe tops the graph in both air and total yards, with 2902 air yards and 5967 total passing yards. He also had the most attempts of 686 on a very pass heavy offense, with the most pass attempts in the college football season. Entering at the end of the 3rd quarter for the American team in the Senior Bowl, he made a good throw on a deep route to get the team in the red zone, but other than making some routine plays was sacked twice and had accuracy issues, particularly underthrowing targets with an interception and no touchdowns.

Pittsburgh quarterback Kenny Pickett ranks second in air and total yards, with 4319 total yards and 2444 of those being through the air. He is third on the graph with 497 attempts, giving even more context to the big difference between Zappe and everyone else in total pass yards with Pickett having nearly 200 less attempts! He was the starter for the National team in the Senior Bowl, completing all six of his passes plus a touchdown. Pickett displayed the ability to throw on the move along with a couple of screens and short completions, but an underthrow on a deep attempt that likely would have gone for a second touchdown.

Nevada quarterback Carson Strong ranks third in air and total yards, with 4186 total yards and 2203 of those being air yards on the second most attempts of 524 on the graph, which is still more than 100 attempts less than Zappe. Strong played in the second half for the National team in the Senior Bowl, but left much to be desired in my opinion. He was under pressure much of the game, with mixed results. He had a good throw for a third down conversion, a good over the middle throw in the hurry up offense, and methodic short passing game, but also fumbled a snap, and was inaccurate deep with an interception and no touchdowns.

There is a noticeable drop off in total yards after the three previously mentioned quarterbacks, which makes for interesting takeaways with the remaining players. The next three quarterbacks are a very close tier with their air yards results:

Western Michigan quarterback Kaleb Eleby impressively was fourth in air yards (1976), and sixth in total yards (3277) on his lower 362 attempts which ranks eighth! Unfortunately, we did not get the opportunity to see him play in the Shrine or Senior Bowl. He is an intriguing player I look forward to learning more in the draft process, especially after hearing Cory Kinnan speak glowingly about him as a “best bang for buck” quarterback on a recent Terrible Podcast considering all the tape he has watched.

Cincinnati quarterback Desmond Ridder is the fifth ranked quarterback in air yards (1945), total yards (3334), and attempts (387) with the fifth-ninth ranks in attempts being within five passes from each other! Ridder played in the Senior Bowl for the National team, coming in before Strong in the second quarter and first noticed the team leaning on the run game heavily, then taking advantage on several play action throws including two touchdowns. He looked good rolling and eluding pressure when necessary and not many negatives other than a fumbled shotgun snap.

Kent State quarterback Dustin Crum is sixth in air yards (1924) and seventh in total yards (3238) on his eight ranked total attempts (382). He was also top ten in rushing points earned when I looked at quarterback mobility, so there are some interesting qualities to his game. Crum started for the East team in the Shrine Bowl, beginning with a three and out and exchange issues early, then showcased more as a runner while facilitating the short pass game, but had accuracy issues especially later in his snaps.

Liberty quarterback Malik Willis ranks seventh in air yards (1628) with a substantial drop off from Crum of nearly 300 yards, but considering his second least total yards (2857) and attempts (339) make for a respectable air yard percentage! Add in his top ranked total rushing points earned and there is an intriguing skillset for a team to mold. He started for the American team in the Senior Bowl especially showcasing his scrambling ability nearly taking one to the house, but a lackluster passing day with a couple inaccurate throws and one being severely underthrown on his four attempts.

North Carolina quarterback Sam Howell has the eighth rank in air yards (1579), with the tenth rank in total yards (3056) and attempts (347). He was also the third and final quarterback that ranked in the top ten in rushing points earned and provides the well-rounded skillset required of a modern quarterback. Howell also appeared for the American team in the Senior Bowl, coming in after Willis in the second quarter. He was pressured much of the game and was sacked multiple times, but also showed good ability to elude pressure with quality throws on the move or scrambling when necessary. I also noticed him working through his progressions well when given enough time and also providing a rushing touchdown.

Iowa State quarterback Brock Purdy is ninth in air yards (1460), eighth in total yards (3188) on a much higher fourth rank in attempts (407), highlighting a lower percentage of air yards on his throws! He played for the West team in the second half of the Shrine Bowl and had an underwhelming performance overall. Mainly accuracy issues and questionable decision making, not seeing a linebacker on a throw and another stepping into a sack.

Notre Dame quarterback Jack Coan ranks tenth in air yards (1450) very close to Purdy, ninth in total yards (3150), and a higher seventh rank in attempts (385). Coan had a strong game as the starter for the West team in the Shrine Bowl with several positive plays in the passing game, sporting a high completion percentage and a touchdown with very few lows from the pocket in my opinion.

Ole Miss quarterback Matt Corral was the biggest surprise on the graph, ranking 11th in air yards (1319) on his sixth ranked attempts (386), but a very high fourth rank in total yards (3349)! This of course highlights the lowest air yards percentage on the graph and is an important factor in today’s game, as yinz know all too well from the Steelers season we just witnessed. He did have a better 2020 season in this regard with stronger supporting cast, but important to note in the learning process. Corral did not appear in an all-star game due to him not graduating yet, unfortunately missing an opportunity to showcase his game last week.

Kansas State quarterback Skylar Thompson missed time due to an ankle injury in 2021, so his bottom ranks in yards and attempts are understandably last. He played for the West team in the Shrine Bowl, coming in late in the third quarter with an up and down performance. Some of the lows were a botched snap, hesitant decision making especially holding the ball taking a sack, and dangerous throws in traffic. He did show ability on play action, scrambling, and hitting a wide-open man for the touchdown along with a fade for a two-point conversion.

To close, I wanted to point out that Brown quarterback E.J. Perry was not included on the graph being from a smaller school and the air yards data unfortunately not being available. He was by far the best quarterback in the Shrine Bowl, playing the second half for the East team. He did have some accuracy and decision-making issues as well, mainly a dangerous cross the field throw, but had positive scrambles when needed (highlighted by two 2-point conversions) and thought he started and finished his playing time well on an impressive 241 passing yards (no other quarterback in the game topped 100) and three touchdowns for the game MVP!

What are some of your favorite takeaways on the quarterbacks? Thanks for reading and let me know your thoughts in the comments!