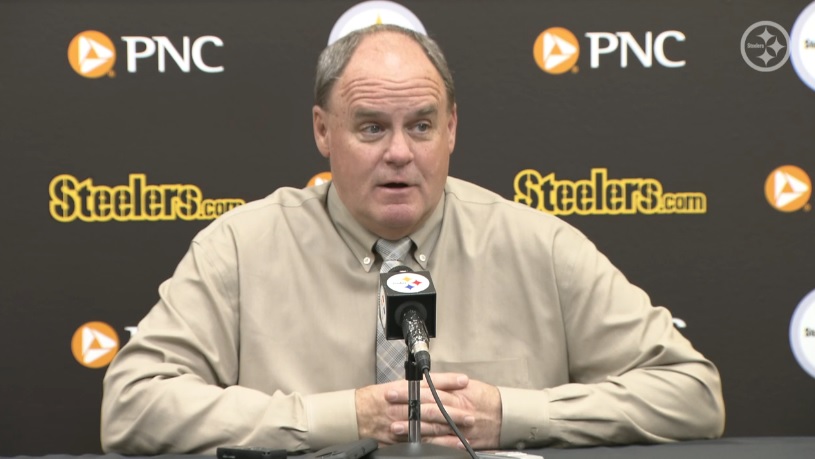 In a world full of quarterbacks with massive arms, top-shelf mobility, and the ability to routinely make the “wow” throw, Kevin Colbert knows the most important trait is a lot less shiny than any of those. An old-school general manager with an old-school belief, holding a quarterback’s accuracy in the highest regard when evaluating his play.

Speaking to the media Monday, Colbert explained why accuracy – or lack thereof – is at the top of his list.

It’s not as exciting as the dude who can launch a ball 60 yards or juke a linebacker out of his shoes but being able to throw the slant and allow a YAC opportunity or hit the deep comeback on the money is what Colbert cares about most. A page out of the Bill Parcells playbook. It doesn’t matter what a quarterback is capable of doing if he can’t put the ball where it needs to go. A 65 yard bomb doesn’t matter if it lands in the third row.

To a degree, accuracy is subjective and comes in different forms. From a very baseline level, here are the 2021 completion percentages of the top quarterbacks that make up the 2022 NFL Draft.

Zappe and Strong clearly at the top with the benefit of more quarterback-friendly offenses with the rest of the group, the top names in this class, closely jumbled together the rest of the way. Of course, completion percentage is highly influenced by a number of variables. Depth of target, talent around him, drops, so the number alone doesn’t tell you everything.

To take it a step further, Cory Kinnan did an in-depth study on completion percentage of specific routes that you can check out here. You can also listen to the Terrible Podcast interview he did last month here.

Colbert also cautioned about not falling too much in love with a quarterback’s mobility, though he acknowledged it is a bonus part of a prospect’s skillset.

“We talk about mobility and mobility is a key part of any quarterback. If he is mobile, but we’re also just going to look at who’s the best at that position because each and every one of them has a different skill set. And I think to prioritize one over another. I think you’ll be blind in just truly evaluating what a given player can do. If he’s a great thrower, he’s a great thrower. If he’s a great runner, and thrower maybe that’s a bonus, but I think we’re always going to just truly evaluate that player and not go into it with specific ideas about who is the best.”

While Colbert predictably didn’t divulge which quarterbacks he liked best in this class, he praised the year Pitt’s Kenny Pickett had, leading the Panthers to an 11-win season, their first since 1981.

“Obviously we watched a great quarterback, Kenny Pickett. I don’t like to talk about individual players, but I think it’s such a unique situation that the season that he had for Pitt, and you have to acknowledge that and congratulations to Kenny, congratulations to Pitt.”

Colbert also downplayed concerns over Pickett’s hand size. Pickett has yet to have his hands measured, declining to do so at this year’s Senior Bowl, but is expected to do so at next week’s Combine. His hand size is expected to be among the smallest at the position, well under nine inches.

Based on what the team has said over the last several months, the Steelers are most likely to be interested in a quarterback who is accurate and offers some level of mobility. That would put them in the crosshairs of guys like Howell, Pickett, Ridder, and perhaps Willis, though there are some questions about his overall accuracy.