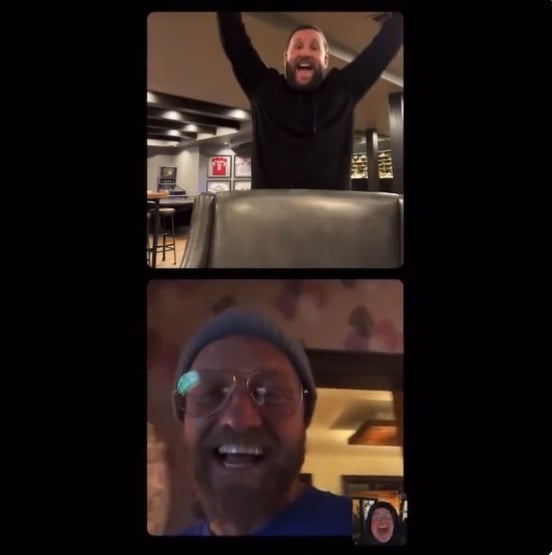 Really cool moment I had to share with you guys. If you’re like me, you were on the literal edge of your seat late Sunday night and early Monday morning as the Los Angeles Chargers and Las Vegas Raiders game went into overtime. Nine minutes into the OT session, it looked like both teams had given up, content with a tie that would’ve sent each into the playoffs but eliminated the Pittsburgh Steelers from postseason contention.

But after a couple of tough Josh Jacobs runs, the Raiders got into field goal range and kicker Daniel Carlson connected from 47 yards out to make Las Vegas – and Pittsburgh – winners.

Best of all, we now know Ben Roethlisberger’s reaction to the moment. He was evidently Facetiming with artists TobyMac and Bart Millard during the final moments of the game, edge of his seat like the rest of us. Fortunately for us, TobyMac posted a clip of Carlson’s game-winning kick. His feed was about 15 seconds ahead of Roethlisberger’s, so you see Roethlisberger reacting to everyone else before watching the game-winner on his end.

Heads up, there is no audio attached in the clip – bummer – so don’t go trying to adjust your levels. Still, the video says it all.

When you decide to watch the end of the Sunday night game on Facetime with Bart & your homie…..a game that determines whether or not he gets in the playoffs and you don’t realize you’re 15 seconds ahead of him on the outcome. 😂😂😂@_BigBen7 @BartMillard pic.twitter.com/TOsiOFazaA

You can see Roethlisberger’s reaction as the others celebrate ahead of him, piecing together what must have happened. Then he watches it himself on his television.

Had Carlson missed the kick or the Raiders simply sat on the ball, the Raiders and Chargers would be in the playoffs and the Steelers’ season would be over as would Ben Roethlisberger’s career.

After the Jaguars beat the Colts and the Steelers knocked off the Ravens, the Chargers/Raiders game seemed like a mere formality. A tie is improbable, only happening once all season, the Steelers/Lions game earlier in the year. The Raiders built up a two-possession lead on the Chargers but thanks to many, many fourth down conversions, the Chargers came back and tied the game at 29 going into OT. They traded field goals in overtime before Carlson’s game-winner.

An awesome moment and you can see how much it meant to Roethlisberger, a guy who still clearly loves the game.

I promise you, Sunday night was the only time you will ever see Ben Roethlisberger do this. pic.twitter.com/7LQhknxn2q