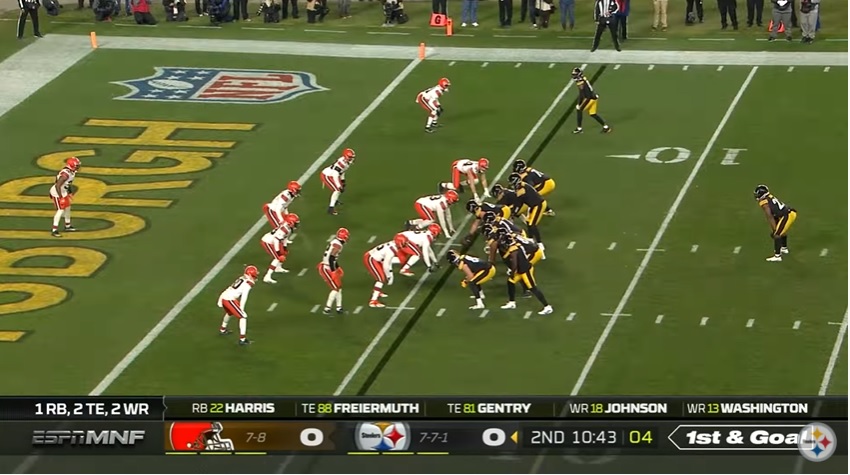 1. Explain How It Happened – The Steelers entered halftime with a ten point lead. How? I have no idea. Thirty-four first half passes when the Steelers might be having their best running game of the season. Those passes gained 96 yards. That is 2.8 yards per pass. There were twenty completions for an average of 4.8 yards per reception. Yikes! Diontae Johnson had six receptions and just 18 yards. It’s difficult to be this bad and lead at the half. And not to be out done, Kevin Stefanski said, “Hold my beer.” Cleveland’s offense was even worse.

2. Beating A Dead Horse – A recurring theme this season has been getting the ball inside the five and not running the ball. I understand it to an extent due to the teams rushing issues this year. In this particular game Najee Harris was averaging 5.8 yards per carry in the first half. The second scoring drive they had a first down at the 4.5 yard line and threw three balls that had no chance at being completed. And the Monday Night Football announcer had the gall to say Matt Canada “has it figured out”? Maybe that was been making decisions at the line but if the running game is working, use it.

3. Diontae’s Downfalls – I could say this was just one game but the truth is these things have all been popping up again. The drops have shown up again in the last month. There were two or three tonight. The habit of catching the ball and running back toward the line of scrimmage to lose yardage. The slipping down on the turf with his feet sliding out from under him. And lastly the false starts. He now has nine in his career. That is way too many. He has improved so much this year so I’m hoping this is just a minor dip in his play.

4. Finding Some Help – Injuries have done their damage on the defensive side of the ball but the team founds some players that could still be here next year. Ahkello Witherspoon has made his mark including an interception and two pass breakup. Derrek Tuszka has two sacks in the last three weeks. Montravius Adams has provided some pressure up front to a depleted D-line. Some good finds to help hold the defense together.

5. Oh My, O-Line – I have bashed them repeatedly over the course of this season so I have to get them their due now. I don’t know what happened to trigger them to help Najee Harris run for 188 yards. Yes, they had a different starter at center but that doesn’t necessarily make the other four guys better. The end zone view showed there were actual holes for Harris to run through. I hope they saved some because they will need it next week.

6. Crowd Kudos – Noticing the crowd is not something that seems to be common place for me and I noticed it early and late. In the beginning of the game they were quiet. Not in a bad way but it seemed like with the Steelers offense on the field they wanted to hear every call Ben Roethlisberger made. The second half was the complete opposite. That place was rocking. The chants about Cleveland. The chants for Ben. It’s been a while since I’ve noticed how loud it was so if you were there, well done.

7. Moore Making Moves – Dan Moore’s game to game performance has had positives and negatives. Last week he had some struggles in pass protection. He’s a rookie and that is going to happen. He faced off with one of the better pass rushers in the NFL this week and for the most part did very well. He has learned from mistakes early in games and made adjustments to get better with in the game. Is he the answer at left tackle for next year? Don’t put it in ink yet but he might be.

8. Step Up To The Slot – You have to give Ray-Ray McCloud a lot of credit. He was given an opportunity to play more on offense and he’s doing what he can on a bad offense. The first eight games he received 10 targets and eight receptions. Over the last seven games he has 47 targets and 27 receptions. The yards production hasn’t been great but part of that is the offensive play selection and the routes he is given. He has more targets and receptions than James Washington. Did not see that coming this season.

9. Waiting For A Chance – Speaking of taking advantage of an opportunity let’s give some love to Corliss Waitman. He spent some time with Pittsburgh last year and on the practice squad of New England this year. Called in at the last minute to fill in and he has performed above expectations. He has seven punts in two games and they have travelled 58, 63, 53, 43, 44, 53 and 51 yards. That’s a 52.1 yard average. Yes, it’s a small sample size but he has given himself a chance to sign on with someone if he doesn’t stay in Pittsburgh next year.

10. They Looked Legit – We know all about the defensive struggles this team has had this year but they kind of looked like a Steeler defense, right? Five different players had at least one sack with T.J. Watt having four! Eleven pass breakups led by Witherspoon with three and Watt and Cam Heyward each with two. That gives Heyward nine sacks and nine pass breakups this year. Add in two interceptions and they looked like the Steeler defenses we’ve come to know and love. Can they do that for at least one more game?