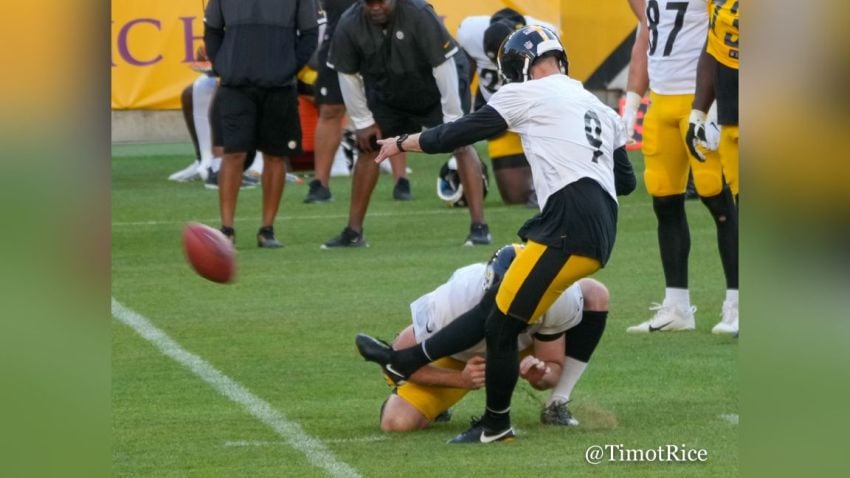 When special teams units take the field during football games, this is often the time when casual football fans get up to get some extra food, check their phone, or go use the restroom. Special teams play tends to get a bad rap in football, not gauging the same interest and excitement as the offense and defense play, especially after kickoffs have been moved up for more touchbacks to discourage more returns to cut down on the big collisions that can occur. You hear the moniker “Ban Kickers” in fantasy football leagues as league managers prefer to stick to normal skill positions to score points than rely on the seeming flukiness of how a place kicker scores week-to-week.

All this being said, special teams complete the third phase of the game of football, and after working with kickers and punters with several D1 schools in my time as a sports performance coach, I am a firm advocate for the saying “kickers are people too”. The Pittsburgh Steelers would agree with that statement, having one of the most reliable kickers in the game in Chris Boswell.

Boswell has been with the team since 2015, serving as the team’s primary placekicker during that stretch. While he went through a rough stretch during the 2018 season, converting only 13-of-20 FG attempts (65%) and missing five extra point attempts, “The Boz” has been on a roll ever since. This past Monday night against the Browns, Pittsburgh relied on Boswell to put points on the board, converting 4-of-4 field goal attempts from 28, 30, 48, and 50 yards along with both of his extra point attempts.

With the Steelers’ offense struggling to move the ball consistently and put points up on the board the last three seasons dating back to Ben Roethlisberger’s elbow injury, Boswell has been one of the best kickers in the league, posting a 92.6% FG percentage during that span (89.2% this season) including converting 88-of-94 XPA (93.6%). This season alone, Boswell is 33-of-37 on FGA, nailing 8-of-9 attempts of 50+ yards.

Chris Boswell from 56. Money. What a beauty.

According to CBS, longest FG ever at Heinz Field. #Steelers

It has long been documented how difficult it can be to kick in Pittsburgh at Heinz Field, as many kickers have struggled to convert anything over 50 yards. In fact, prior to Boswell joining Pittsburgh in 2015, there were just four field goals converted from 50+ yards at Heinz Field. Since then, Boswell has nailed 14 50+ yard field goals at Heinz Field, as of Monday night. Dave Bryan and Alex Kozora have mentioned before on The Terrible Podcast their confidence of Boswell stepping up to the plate knock one in, making anything inside 50 yards seem almost automatic and even long kicks 50+ seem like money in the bank at times. The man has the leg to pound it through the uprights.

For a team that has struggled to find its identity in offense, thus struggling to put points on the board on plenty of occasions, the Steelers have relied on their defense and special teams to keep games close. With the defense faltering this season compared to seasons past, the play of Boswell has been even more necessary to put some points on the board instead of giving the ball back to the opposing offense without getting a score. Needless to say, Chris Boswell’s impact on this team should not go underestimated as a valuable piece that Pittsburgh has relied on time and time again to bail them out when the offense falters or when they need a game-winning kick.

I personally recognize that I haven’t given Boswell his due for what he means to this team and its ability to win football games the past several years. We need only need to go back several years ago when Pittsburgh struggled to find any consistency, relying on the up-and-down play of Jeff Reed for nearly a decade before making the change to Shaun Suisham, who was decent at mid-range kicks, but didn’t have the leg to hit anything from 50+ with confidence. An injury to Suisham forced Pittsburgh to trade for Josh Scobee, who was awful in his short stint with the team, prompting Pittsburgh to give Boswell a try, which worked out better than the team could have imagined.

As the Steelers take on the Ravens in what may be their final game of the 2021 season on Sunday, rest easy knowing that Pittsburgh doesn’t have to devote resources to finding a reliable kicker, with Boswell signed through 2022. If anything, Pittsburgh should look at re-upping the Boz’s contract going into next season. He came back from a dreadful 2018 campaign where many were calling for his head, and for a team dealing with so much uncertainty at so many positions going into next season, Boswell is about as certain as they come.

What are your thoughts on Chris Boswell and his impact for the Pittsburgh Steelers? Would you consider him one of the best kickers in the NFL and potentially one of the best kickers all-time in Pittsburgh? Does his importance get overlooked at times? Should the Steelers try and re-sign him this offseason? Please leave your thoughts in the comments section below and thanks again for reading!