It was a bit of a surprise to hear LT Dan Moore Jr mentioned by Coach Tomlin in his weekly Tuesday press conference with an ankle injury. The rookie wasn’t evaluated by trainers at any point during the emotional Monday night victory over the Browns and only G Trai Turner was listed with an injury in Tomlin’s media session following the game other than the usual bumps and bruises.

Moore has not participated in practice since that game. On Friday morning, QB Ben Roethlisberger spoke with the DVE Radio crew and described his left tackle’s injury as a “kind of a high ankle sprain” which occurred sometime in the 1st quarter. Contrary to Ben’s comment that the LT may have missed a play, Moore stayed on the field and didn’t miss a snap.

I’ve talked about the difference between high ankle sprains and low ankle sprains in the past. While Moore was extraordinarily reliable in college, never missing a game due to injury in four seasons, it is hard to imagine that even he could have stayed in the game Monday for three more quarters with a high ankle sprain. It is a pretty painful injury and results in some instability, and Moore didn’t seem to be favoring either ankle during the rest of the game.

So with all due respect to Dr. Roethlisberger, who has certainly toughed out games through numerous injuries, he may have the diagnosis wrong. Reviewing the film, it appears that Moore tweaked his right ankle on a 3rd and 2 rushing play late in the 1st quarter. It is difficult to see the exact mechanism because he winds up at the bottom of the pile but you can see Moore’s ankle start to bend here:

Clip of the injury. Looks like that left ankle got bent pretty badly. Happened in the first quarter, Moore didn't miss a snap. Props for finishing out the game against a tough opponent. #Steelers https://t.co/kfTGPaUNo2 pic.twitter.com/6IGnHFaKwN

I’m sure Moore has already had an MRI which would certainly clarify the injury. Considering that he was able to play the whole game, I would guess that this is a mild ankle sprain and Moore developed increased swelling and pain after the game, leading to the late diagnosis.
Let’s take a brief stop for some ankle anatomy: 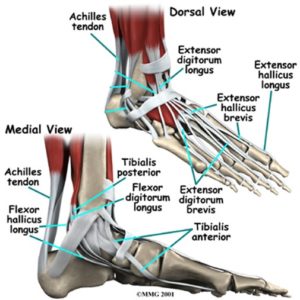 From the American Academy of Orthopaedic Surgeons:

A twisting force to the ankle, common is sports like football that require cutting when running, can cause a tear of one or more ligaments.  The lateral ligaments are more commonly injured. 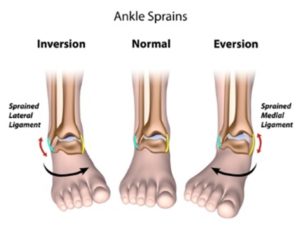 The initial treatment is the usual: RICE (rest, ice, compression and elevation).  It’s tough to get any detail with the media limited to zoom calls and not at the practice facility in person, so we do not know if Moore is sporting a boot or using crutches.  But if we assume it’s a Grade 1 sprain and nothing worse, typical recovery time is a week or two, which is a lot faster than the dreaded high ankle sprain (which can sideline a player for up to 8 weeks).

As Tomlin always says, it’s hard for a rookie to get on a moving train after missing most of the team practices during the week.  With that in mind, it’s extremely unlikely that Dan Moore Jr will be protecting Ben Roethlisberger’s blind side in what may be the QB’s final game of his 18 year NFL career.  Moore is listed as “doubtful” by the team and hasn’t been ruled out yet, so there is still the slightest hope he will get a helmet Sunday.

Then again, slim chances are the story line for the Steelers in Week 18, who must beat the Ravens in Baltimore and also need the Jaguars – a team currently holding the #1 2022 draft pick – to pull off a win against the Colts.  And if any rookie was going to beat the odds and battle back for both his QB and a shot at the playoffs, my money would be on Dan Moore Jr.  We will know soon enough.