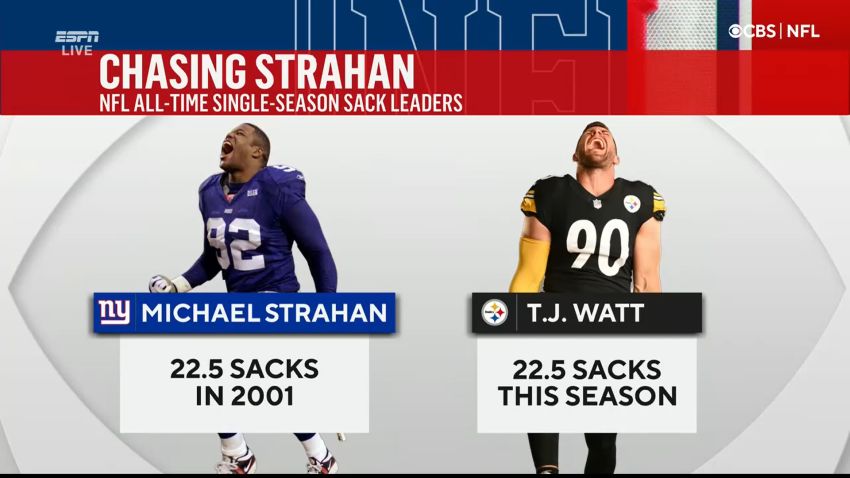 It took most of a half, but it finally happened: T.J. Watt got a sack. In doing so, he tied the NFL’s single-season record for the most sacks in a single season, currently sitting at 22.5, tying the New York Giants’ Michael Strahan, who set the mark in 2001.

No one has recorded more sacks in a single-season than these two.

Watt had what was initially assumed to be a sack early in the game when Baltimore Ravens center Bradley Bozeman botched a snap to quarterback Tyler Huntley, but it was ruled as an aborted play. He still recorded a forced fumble, however, his fifth on the season.

He still has another half to set a new record, needing just half a sack to do so. And he should have opportunities. Neither of these offenses are running the ball very well. Huntley has already attempts 17 passes, Ben Roethlisberger 15. And Baltimore will start the second half with the football in a 3-3 game. Tune in and see if Watt can complete his quest to set a new league record.

The sack came at a key moment as the Steelers continue to make a playoff push. Nursing a precarious 3-0 lead, Pittsburgh found the Ravens at the gates, set up with first and goal at the three following a roughing the passer penalty on what actually would have been a sack split by Watt and Cameron Heyward. Watt got his own full sack on the next play, working around right tackle Patrick Mekari, dropping Huntley for a loss of three.

On third and goal from the six, Watt got up and swatted the pass to force the Ravens to settle for a field goal, so the two AFC North rivals, competing for a potential shot at the seventh seed, go into the second half of the game tied. And both teams are watching the scoreboard, seeing the Jacksonville Jaguars leading the Indianapolis Colts, 16-3. Both teams need the Colts to lose in order for themselves to make the playoffs.

There have only been 13 seasons in which a player has recorded 20-plus sacks. Older brother J.J. Watt is the only player to have two of them, twice recording 20.5 sacks in a single season. The three-time Defensive Player of the Year, who is hoping to come back to play in the postseason for the Arizona Cardinals, has been T.J.’s biggest cheerleader all the way, congratulating him on making history.

T.J. should be well on his way to collecting his first Defensive Player of the Year Award for the 2021 season after likely finishing the season with a commanding lead in sacks, while also leading or tied for the lead in quarterback hits and tackles for loss, in addition to five fumbles. It’s been a long time coming, having arguably been the best defensive player in the league over the past three years.