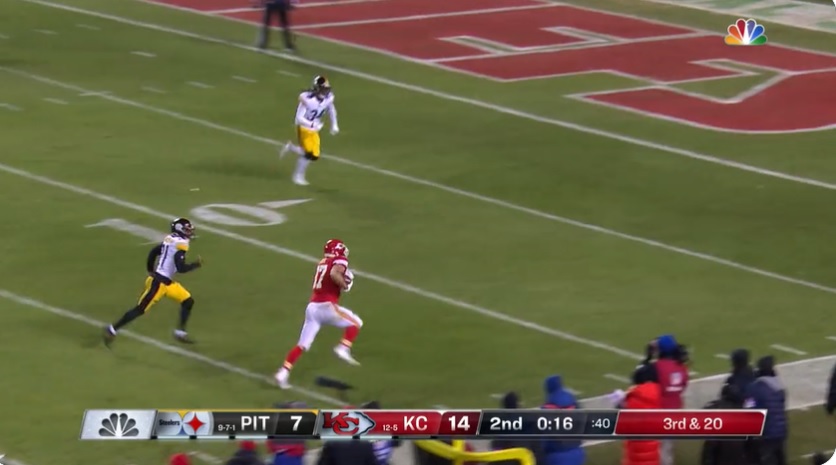 The Pittsburgh Steelers’ season came to an end on Sunday night at Arrowhead Stadium, as the Kansas City Chiefs won their Wild Card Weekend matchup 42-21.

The Steelers won the coin toss and elected to receive, but they went three-and-out on their opening possession. WR Mecole Hardman returned the ball to the Chiefs 42 after a 21-yard punt return, and then RB Jerick McKinnon gained six yards on a first down carry, but a two-yard loss on a screen to Hardman was followed by a pass breakup by S Tre Norwood on third-and-eight and the Chiefs were forced to punt.

Pittsburgh’s second drive started at their own 23. They inexplicably threw to Derek Watt (who was lined up in the slot) on first-and-ten, and they eventually went three-and-out after a third down pass to WR Chase Claypool was incomplete. QB Ben Roethlisberger looked like he had TE Pat Freiermuth open, but he opted for Claypool and was incomplete. P Pressley Harvin booted a 56-yard punt and the Chiefs took over possession at their own 20. On first down, McKinnon gained 20 yards on a screen pass and the Chiefs picked up the first first down of the night. On third-and-six, a huge tackle by S Minkah Fitzpatrick stopped the Chiefs short of a first down and the Chiefs punted.

Pittsburgh again went three-and-out after Roethlisberger was sacked by DT Tershawn Wharton. Hardman returned the punt 48 yards to the Pittsburgh 22, but on first-and-ten QB Patrick Mahomes was picked off by LB Devin Bush after OLB T.J. Watt tipped the pass.

The Steelers got their first first down of the game on a seven-yard reception to WR JuJu Smith-Schuster in his first game back from a shoulder injury. A drop by WR Diontae Johnson on second down set up third-and-eight, and then Johnson was flagged for a false start to make it third-and-13. Pittsburgh could not pick up the first down after Roethlisberger was incomplete to Smith-Schuster. Harvin’s fourth punt of the game was downed at the Kansas City 19-yard line.

Kansas City went to Hardman on third down and he came through with a four-yard reception and a first down. Pittsburgh forced another third down, and on third-and-six G Trey Smith was flagged for a false start to make it third-and-11. On third down, Mahomes hit WR Demarcus Robinson for 15 yards and a first down. On third-and-nine, the Chiefs failed to convert after another breakup by Norwood. With seven seconds left in the first quarter, the Chiefs punted again. Pittsburgh took over at their own 19 after a fair catch by McCloud.

Two runs by Harris set Pittsburgh up for third-and-three, and Roethlisberger and Johnson connected for a first down. Another two runs by Harris made it third-and-two, and on third down Roethlisberger and Johnson miscommunicated on a deep ball and the pass was incomplete. Harvin came out for another punt, and this one went 47 yards and pinned the Chiefs at their own 13.

A facemask penalty against T.J. Watt on first down gave the Chiefs a first down, but the Chiefs went wildcat on second down and RB Darrel Williams fumbled and Watt scooped it up and took it back for a touchdown. K Chris Boswell’s extra point gave the Steelers a 7-0 lead with 10:41 left in the first half.

The Chiefs got the ball back and came back with a 20-yard completion to WR Tyreek Hill on first down. Kansas City got another first down on a screen to McKinnon that went for 14 yards. A false start against TE Blake Bell made it first-and-15. A Mahomes scramble for 23 yards brought Kansas City to the Pittsburgh 22, and a two-yard loss on first down made it second-and-12. TE Travis Kelce gave Kansas City a first-and-goal with a 16-yard reception, and the Chiefs found the end zone two plays later on a Mahomes flip pass to McKinnon. K Harrison Butker’s extra point was good, and the game was tied up at 7-7 with 5:45 to go in the first half.

Roethlisberger and the Steelers took over on their own 25, and a first down shot downfield to Claypool was incomplete. Harris ran for eight yards on second down, and on third-and-two another drop by Johnson cost the Steelers a first down. Harvin’s punt was just 41 yards to the Chiefs 26, and Mahomes came back out looking to give Kansas City the lead. Mahomes was incomplete on first down, but on second-and-ten he found Kelce for a 31-yard catch-and-run. McKinnon ran for 15 yards on the next play to put Kansas City inside the Pittsburgh 30. Another McKinnon run picked up 13, and the Chiefs were in the red zone. At the two-minute warning, the Chiefs faced a third-and-seven after a three-yard gain by TE Blake Bell. On the third down play, Mahomes found a wide-open WR Byron Pringle in the end zone for a touchdown. Kansas City took a 14-7 lead with 1:55 left in the first half after Butker’s extra-point.

Pittsburgh’s attempt at a two-minute drill began on their own 15-yard line. A run for no gain on first down didn’t help matters, and then Freiermuth gained five on second-and-long. On third-and-five, Roethlisberger went deep to Claypool, but the pass was incomplete and the Steelers once again had to punt. It was fielded by WR Tyreek Hill, but S Miles Killebrew made a great stick to force a loss of eight and force the Chiefs to start from their own 20. On second down, McKinnon gained 15 yards so with 41 seconds left in the half, Kansas City had the ball on their own 35. On the next play, Mahomes found Robinson open downfield for 27 yards. Kansas City looked like they were going to get an easy score, but Mahomes was sacked by OLB Alex Highsmith for a loss of ten yards. With 28 seconds left, the Chiefs had a second-and-20 from the Pittsburgh 48. Mahomes avoided a sack but was incomplete on second down, and on third-and-20, Mahomes threw a touchdown pass to Kelce. The Chiefs went up 21-7 with just 13 seconds left in the half.

WR Byron Pringle returned the second half kickoff to the Kansas City 31, and the Chiefs immediately picked up a first down on a 12-yard run by McKinnon. On second-and-nine, Demarcus Robinson gained 29 yards to the Pittsburgh 26. Mahomes was sacked by DL Montravius Adams on first-and-ten for a loss of ten, and on third-and-12, McKinnon gained 23 yards on a slip screen that brought Kansas City to the Pittsburgh 5. A touchdown pass to Hill was reversed, but the Chiefs had the ball inside the one-yard line for third-and-goal. The Chiefs still found the end zone on a pass to OL Nick Allegretti. Butker’s extra-point put the Chiefs up 28-7, and the Steelers were left to play for pride.

McCloud’s kick return set up Pittsburgh at their own 30, but Harris fumbled for the first time all season as LB Willie Gay knocked the ball out and the Chiefs took over in plus territory. Mahomes hit Hill for 31 yards and a touchdown, and the Chiefs took a 35-7 lead with 9:14 left in the third quarter.

Claypool got 16 yards and a first down on second-and-12, and on third-and-four the Steelers picked up another first down, as Freiermuth gained eight yards. The Steelers ran their first play from Kansas City territory with 6:32 left in the third quarter, and it was a five-yard completion to Claypool. Another first down to Smith-Schuster set up a 22-yard completion to WR James Washington, who was likely playing his last game as a Steeler. Diontae Johnson caught a 13-yard touchdown on the next play, and the Kansas City lead was cut to 35-14 with 4:10 left in the third quarter after Boswell’s extra point.

The Chiefs opened up their next drive with a loss of four on a nice run stop by OLB Derrek Tuszka. On third-and-eight, Pringle got open again and had a 15-yard catch-and-run for a first down. A 41-yard gain to Hardman later in the drive gave Mahomes over 400 passing yards on the night and set up the Chiefs in the red zone. On the first play of the fourth quarter, the Chiefs converted a third-and-inches and with first-and-goal from the 2, Kelce threw a touchdown pass to Pringle. The Chiefs took a 42-14 lead after the extra point.

Pittsburgh faced a fourth-and-one on their next drive and went for it down 28 points, and RB Benny Snell Jr. got enough for the first down. A holding penalty against LT Dan Moore Jr. gave Pittsburgh a first-and-20, and Roethlisberger was incomplete deep on first down. After a roughing the pass penalty, Pittsburgh had another first-and-ten. A seven-yard completion to Smith-Schuster picked up another first down and a nine-yard completion to Freiermuth made it second-and-one. RB Kalen Ballage converted on third down, and Pittsburgh had a new set of downs.

Later in the drive, Roethlisberger was incomplete deep to Claypool on third-and-two. On fourth down, Johnson gained five yards and then Roethlisberger threw his second touchdown of the night, this one to Washington from 15 yards out. Boswell made the extra point, and the Steelers made it a three-score game with 7:36 left in the game. The Steelers attempted an onside kick, but it was recovered by Demarcus Robinson. The Chiefs took over at midfield.

A second-and-four run by McKinnon gave Kansas City a first down. The Steelers forced Kansas City into a third-and-nine, and T.J. Watt sacked Mahomes for a loss of 14. Kansas City punted it away with 4:35 left in the game. Pittsburgh took over at their 19 for what would likely be Ben Roethlisberger’s final drive as an NFL quarterback. A five-yard completion to Snell gave Pittsburgh a first down. Later in the drive, Johnson converted a first down with a seven-yard reception from Roethlisberger. After the two-minute warning, the Steelers faced a second-and-three from the Kansas City 48. Ballage picked up a first down two plays later, and Roethlisberger got sacked on first-and-ten for a three-yard loss. On third-and-three, he was complete to McCloud for a 12-yard gain and then he hit Snell for 11 yards. With 11 seconds left, the Steelers used their last timeout. Roethlisberger would have a shot for one final touchdown with 11 seconds left from the Kansas City 14-yard line. The likely final play of Roethlisberger’s career was an 11-yard completion to TE Zach Gentry. The Chiefs ended the Steelers’ season with a 42-21 win.

For Pittsburgh, their season is over, and they’ll head into the offseason with a hole at the quarterback position. For Ben Roethlisberger, his next stop in his football career will likely be in Canton, Ohio at the Pro Football Hall of Fame.